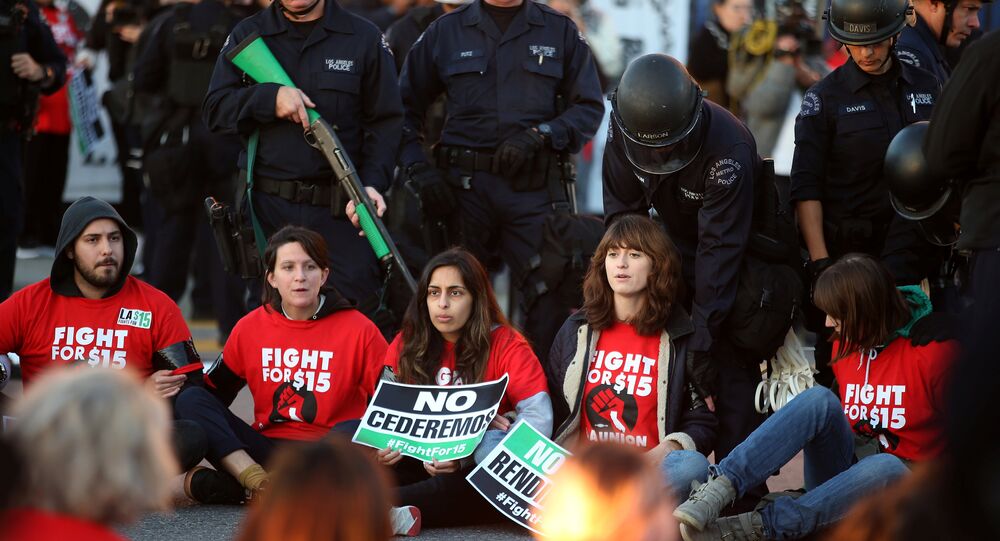 Arrests, Rallies as #FightFor15 Organizes Nationwide Strike Across the US

Over 100 people were arrested early on Tuesday morning as protests and strikes took place in cities across the nation -- fighting for a higher federal minimum wage, immigration reform, and union rights.

For the four-year anniversary of the formation of workers-rights group FightFor15, they had called for a nationwide day of protests and strikes in 340 cities — specifically fast food and airport workers.

“Tuesday, November 29, the #FightFor15 is staging a national day of disruption. We won’t back down,” the Fight for 15 Twitter account posted with the announcement earlier this month.

Protests across the nation began before dawn.

In Los Angeles, 49 people were arrested after refusing to comply with officers' orders to stop blocking traffic.

© AP Photo / David Goldman
#FightFor15: US Movement for Livable Wage Calls for ‘Massive’ Protests
In Detroit, 24 women and 15 men were arrested during a demonstration that began at 6 a.m. The Detroit Police Department began making arrests as the group was blocking a busy road during rush hour.

"The group stated they were prepared to be arrested for non-compliance and similar protests are set in other states," DPD spokeswoman Jennifer Watson told the Detroit Free Press.

Meanwhile, in New York City, approximately 200 protesters began to gather before the sun came up at Zuccotti Park — the site of the 2011 Occupy Wall Street camp. Approximately a dozen protesters were arrested for blocking traffic by a McDonald's.

"When we started demanding $15… people thought we were crazy, but we were just demanding the basic minimum to survive," protestor Alvin Major, 50, a Guyanese immigrant who lives in Brooklyn and works at a KFC restaurant, told Reuters.

"Right now I can barely pay my bills," Major continued. His wife is ill, and he has four children.

In Cambridge, Massachusetts, another 34 people were arrested for blocking traffic during a march that began at a McDonald’s restaurant. There were roughly 100 people participating in the march, which police have stated remained peaceful other than the blocking of traffic.

© AFP 2020 / L.E. BASKOW
Trump Surprises US Voters With Vow to Raise Minimum Wage to $10 per Hour
During an interview in July, the then-Republican presidential candidate Donald Trump broke from his party’s platform to promise an increase in minimum wage. He did note, however, that more expensive city regions need to have a higher minimum wage than lower-cost rural areas.

Trump explained that minimum wage regulations need to be based on regional living costs, but that with a $10 federal minimum wage, individual states could then vote to raise theirs above the threshold. On election day, voters in Arizona, Colorado, Maine and Washington all opted to raise their state’s minimum wage.

"There is no question to us that this is a moment that working people need to take action, mobilize, organize, and that (Trump) needs to be held accountable for his promises," Hector Figueroa, president of the property service workers union 32BJ SEIU in New York, told Reuters, speaking on Trump’s promise to raise the minimum wage.