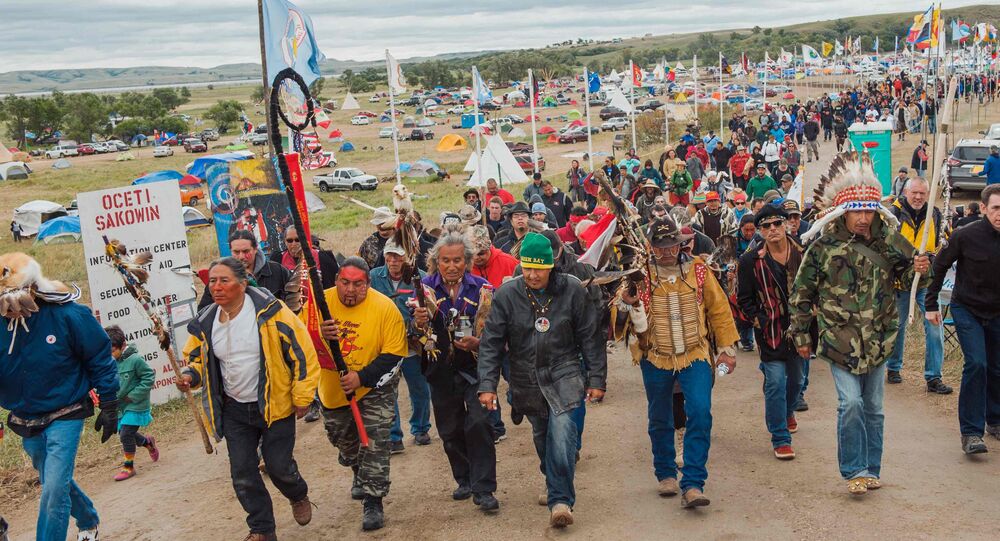 #NoDAPL Water Protectors to Police: We Are Not Leaving Despite Eviction Threat

Those protesting the Dakota Access Pipeline at the Oceti Sakowin camp have been given an eviction notice by the US Army Corps of Engineers, but demonstrators have announced that they will not comply.

© REUTERS / Stephanie Keith
Police Defend Water Cannon Use on Dakota Access Protesters in Sub Freezing Weather
Last week, the Corps sent a letter to Standing Rock Sioux tribal leader Dave Archambault asserting that the camp will be cleared on December 5. There are currently thousands of tribe members and supporters who are braving the winter weather in the camps, and 1,500 US military veterans are set to arrive December 4 to stand with them in solidarity.

"This decision is necessary to protect the general public from the violent confrontation between protesters and law enforcement officials that have occurred in this area, and to prevent death, illness, or serious injury to inhabitants of encampments due to the harsh North Dakota winter conditions," Col. John Henderson of the Corps said in the letter.

Archambault responded by firmly stating that the protesters are not leaving until their demands are met. The demonstrators, who call themselves “water protectors,” point out that the 1,200-mile pipeline threatens the drinking water of the reservation, as well as those who get their water supply from the Mississippi River. They maintain that a leak would endanger the water supply of millions of people.

“The letter states that the lands will be closed to public access for safety concerns, and that they will allow for a ‘free speech zone’ south of the Cannonball River on Army Corps lands,” the statement reads.

The notice from the Corps came less than a week after water was sprayed on protesters in subfreezing weather, and a woman nearly lost her arm, claiming her severe injuries were from a flash-bang grenade fired by law enforcement.

“It is both unfortunate and ironic that this announcement comes the day after this country celebrates Thanksgiving – a historic exchange of goodwill between Native Americans and the first immigrants from Europe,” the statement continued.

GoFundMe/Michael Basillas
Activists Call Police Brutality as Dakota Access Pipeline Protester May Lose Arm
“Although the news is saddening, it is not at all surprising given the last 500 years of the treatment of our people. We have suffered much, but we still have hope that the President will act on his commitment to close the chapter of broken promises to our people and especially our children.”

Speaking to reporters on Saturday, protesters asserted that they will be resisting the eviction through nonviolent means.

On Sunday, the Corps issued a follow-up statement saying that they will not use force to remove the demonstrators.

“The Army Corps of Engineers is seeking a peaceful and orderly transition to a safer location, and has no plans for forcible removal. But those who choose to stay do so at their own risk as emergency, fire, medical, and law enforcement response cannot be adequately provided in these areas,” the statement said. “Those who remain will be considered unauthorized and may be subject to citation under federal, state, or local laws. This will reduce the risk of harm to people in the encampments caused by the harsh North Dakota winter conditions.”

All eyes will be on North Dakota next week, to make sure that those promises are kept.