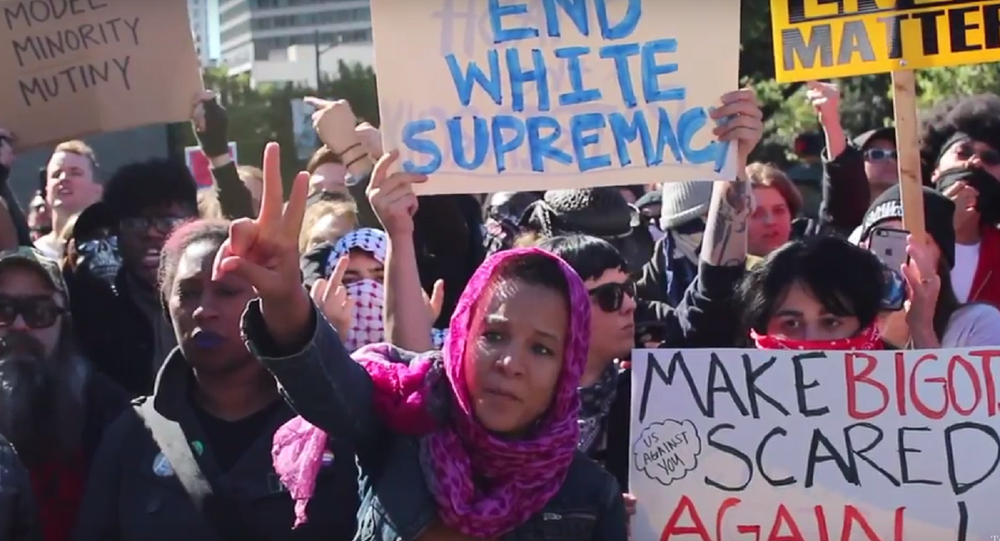 A weekend “White Lives Matter” protest at a presentation of a monument honoring African Americans in Austin, Texas, ended with eight arrests.

The Texas African American History Memorial was placed on the grounds on the State Capitol near other monuments which honor Confederate soldiers who served during the Civil War on Saturday morning.

YouTube/Taurean Reign
Armed ‘White Lives Matter’ Group Protests at Houston NAACP Office
“Today we come together to proudly honor the African-Americans who helped to grow Texas from the bounty of the land, from the sweat of their toil and from the passion of their dreams,” Governor Greg Abbott said during the unveiling. “We are reminded that our work is not yet done. If we are to truly elevate Texas to its limitless potential we must continue to expand liberty and opportunity for all.”

As the monument was being unveiled however, a small group of some two-dozen White Lives Matter protesters, some of whom were open-carrying weapons, were met by a much larger crowd of Black Lives Matter supporters who came to counter protest.

The unveiling was not interrupted by either protest group as it was in another area of the grounds. The WLM protesters claimed that it was a coincidence that the protest occurred at the same time as the monument reveal ceremony, and that it “was not what they were protesting.”

The small group was quickly drowned out by counter protesters chanting “black lives matter,” and, “say it loud, say it clear, refugees are welcome here.” Many were holding signs which said “stand against hate.”

"You all are anti-white and anti-American," protest organizer Ken Reed said into a bullhorn as he called for the “preservation of white people.” He was met by a chant of “Nazis go home.”

The groups were originally separated by large barriers and also by State Troopers on horseback, but the two crowds intermingled as they dispersed.

“No Trump, no KKK, no fascist USA,” the crowd of counter-protesters chanted.

The tense situation escalated as four people were arrested for assault, two for evading arrest, one for disorderly conduct, and another for “interference with public duty,” though it remains unclear which side the arrestees were from. All charges stemming from the event are misdemeanors.

“Some protesters assaulted other protesters,” Texas Department of Public Safety spokesman Sgt. Victor Taylor said in a statement to reporters. “We don’t know for sure which side they were on. A lot of them were co-mingled.”

How a Harmless Frog Became a 'Nazi Symbol': Pepe’s an Issue in US Election