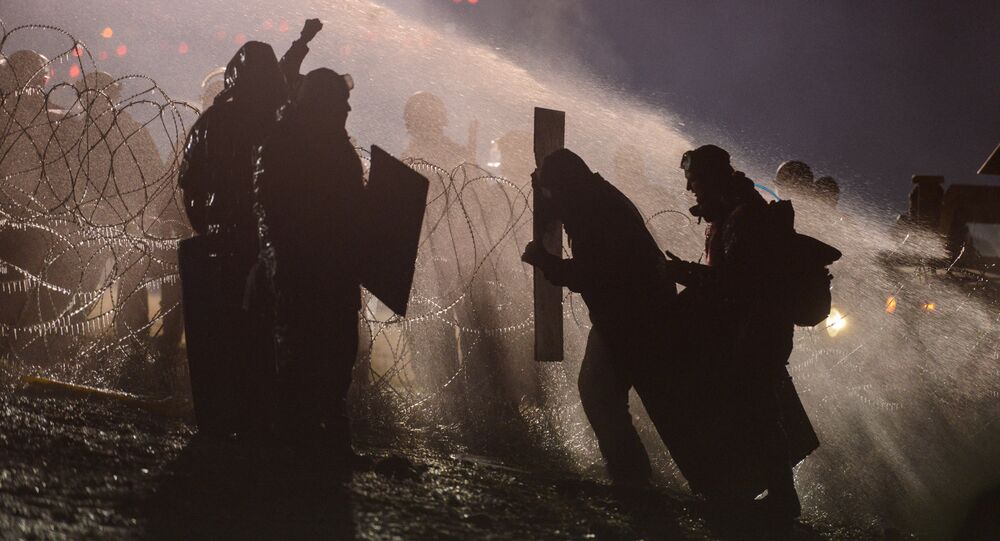 Law enforcement is defending their decision to use water cannons in subfreezing weather on hundreds of Dakota Access oil-pipeline protesters on Monday evening, despite causing at least 17 people to be hospitalized, several with hypothermia.

The demonstrators were attempting to break through a barricade put up by the state of North Dakota at the end of October, on a bridge on Highway 1806.

“The barricade restricts use of the highway preventing emergency services from getting to the camp or Cannonball. In addition, access to business is restricted which is impacting the local economy,” Indigenous Rising Media wrote in their morning update.

Police used tear gas, concussion grenades, and rubber bullets, as well as a water cannon on the demonstrators. Indigenous Rising Media reported that 167 people were injured, including three elders. They wrote in an evening update that the police were targeting the heads and legs of the protesters.

“They were attacked with water cannons,” LaDonna Brave Bull Allard, a Standing Rock Sioux tribe member and founder of the Sacred Stone camp, told The Guardian. “It is 23 degrees [-5 °C] out there with mace, rubber bullets, pepper spray, etc. They are being trapped and attacked. Pray for my people.”

Injuries included "hypothermia, a number of head injuries from being shot with rubber bullets, one individual had a heart attack," Dallas Goldtooth, an organizer with the Indigenous Environmental Network told the LA Times.

Morton County sheriff spokesman Rob Keller claimed that water hoses were not being used specifically to soak protesters in freezing weather, but instead were aimed at them in order to put out fires the demonstrators had set.

"Water hoses were used to keep distance between officers and criminal agitators and also to put out fires set by those agitators," he said.

© AP Photo / John L. Mone
Journalist Shot with Rubber Bullet at DAPL Protest Site; Catches it on Film
The sheriff’s department claimed that officers "had rocks thrown at them, burning logs and rocks shot from slingshots.” One officer was reportedly hit in the head with a rock.

The Sierra Club’s Executive Director Michael Brune has called the use of water hoses an “act of brutality,” and “nothing short of life-threatening and inhumane.”

The Standing Rock Sioux tribe is protesting the oil pipeline, pointing out that it is destructive to both sacred lands and to the environment. They refer to themselves as “water protectors” rather than protesters. They have been actively protesting at the encampments since April, and have been joined by thousands of people from across the nation.

The 1,160-mile pipeline will transport some 450,000 barrels of oil per day across the Missouri River and other sensitive habitats. Opponents observe that a leak would be catastrophic for the water supply of millions of people.

In addition to the protest, the tribe is also suing the US federal government to stop construction.

30 Arrested in Protests Against Dakota Access Pipeline in US