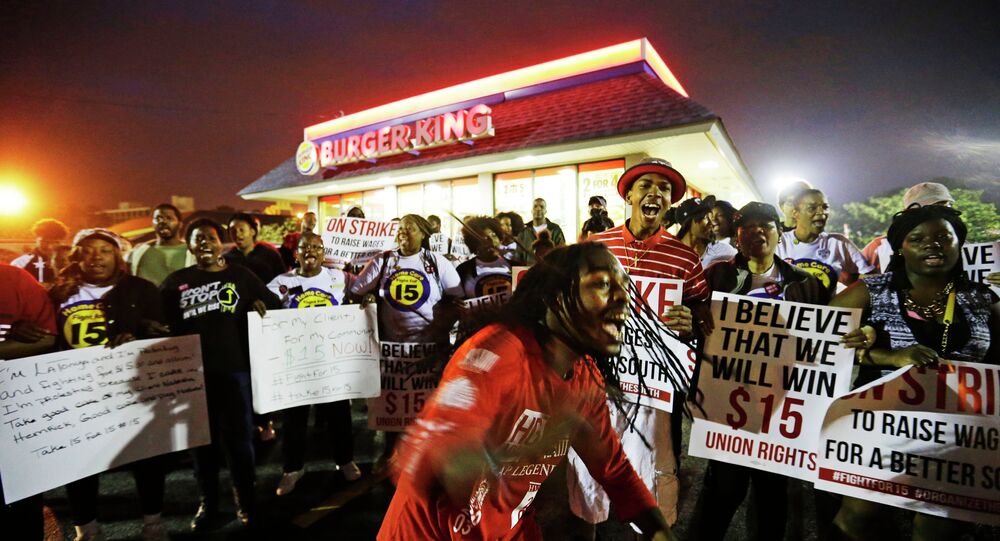 #FightFor15: US Movement for Livable Wage Calls for ‘Massive’ Protests

The nationwide campaign to increase the federal minimum wage in the United States is calling for a day of strikes and civil disobedience on November 29.

The Fight for 15 group is preparing to protest in 340 cities across the United States, and is calling for airport and fast-food workers to strike.

Mike Mozart
Minimum Wage Protesters: We Can’t Survive on Seven Twenty Five
Group representatives have stated that they expect subcontracted service staff at roughly 20 airports to participate. It is anticipated to be the largest day of protest in the organization’s four year history, coinciding with the anniversary of the launch of the movement.

“Tuesday, November 29, the #FightFor15 is staging a national day of disruption. We won’t back down,” the Fight for 15 Twitter account posted on Monday morning.

Fight for 15 began in New York City, as fast-food workers went on strike demanding $15-an-hour pay, as well as union rights. The movement was successful, and in April of this year NY Governor Andrew Cuomo signed a law to increase wages to a $15 minimum by the end of 2018 in New York City, and by 2021 in other counties, including Nassau, Suffolk and Westchester. For the rest of the state, the minimum wage will be raised to $12.50 by the end of 2020.

The movement spread to over 300 cities on six different continents, and has seen additional successes, winning $15 an hour in the state of California, and in large cities such as Seattle. Other cities, including Portland and Chicago, have seen significant minimum-wage increases.

“For too long, McDonald’s and low-wage employers have made billions of dollars in profit and pushed off costs onto taxpayers, while leaving people like us – the people who do the real work – to struggle to survive,” the campaign’s website states. “That’s why we strike.”

In July then-Republican presidential candidate Donald Trump broke from his party’s platform, promising to increase the federal minimum wage. He did, however, acknowledge that states with more expensive urban regions need to have a higher minimum wage than lower-cost rural areas.

Minimum-wage regulations, Trump noted, are most feasible when they are based on the living costs in each particular area, rendering the federal wage level regulations largely irrelevant to the economic reality in different regions of the US. With a $10/hour federal minimum wage, individual states, he claims, could go above that threshold.