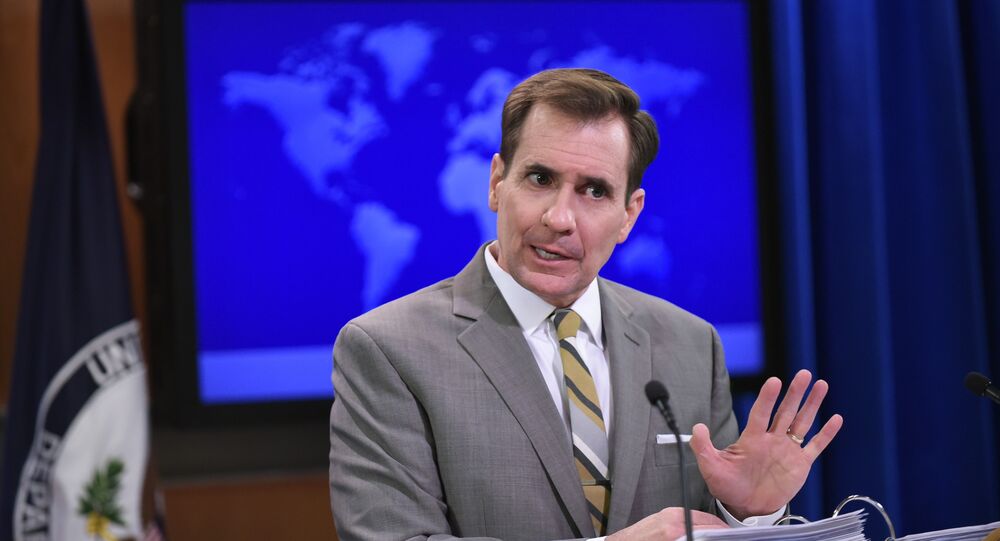 US State Department spokesman John Kirby must be disciplined by the US State Department for the discriminative treatment of an RT journalist during a briefing, Russian Foreign Minister Sergey Lavrov said after bilateral talks with US State Secretary John Kerry.

LIMA (Sputnik), Svetlana Alexandrova — On Wednesday, Kirby accused Russia and Syria of bombing hospitals in Syria, prompting a question from an RT reporter regarding details of these alleged attacks. Kirby, in turn, said that he was not going to put RT "on the same level" with other reporters present, which "are representing independent media outlets."

"We are not going to start every day by condemning Mr. John Kirby but I believe he must be disciplined by his own superiors for what he is doing and how he is doing his job," Lavrov said after a meeting with Kerry in Lima, Peru.

He pointed out that Russian Foreign Ministry spokeswoman Maria Zakharova has already expressed what Russia thinks about this incident.

On Thursday, Zakharova called the attempt to divide journalists into "right and wrong" outrageous, and said that Lavrov would discuss with Kerry the way the US State Department spokesperson treated the RT reporter.

However, the issue was not brought up during the Lavrov-Kerry talks. Lavrov explained that he did not wish to "complain to his [Kirby's] boss in his absence."

The meeting between Lavrov and Kerry on the sidelines of the Asia-Pacific Economic Cooperation (APEC) Economic Leaders week in Lima lasted for about an hour. It was the first meeting between the two after the victory of Donald Trump in the US presidential elections.