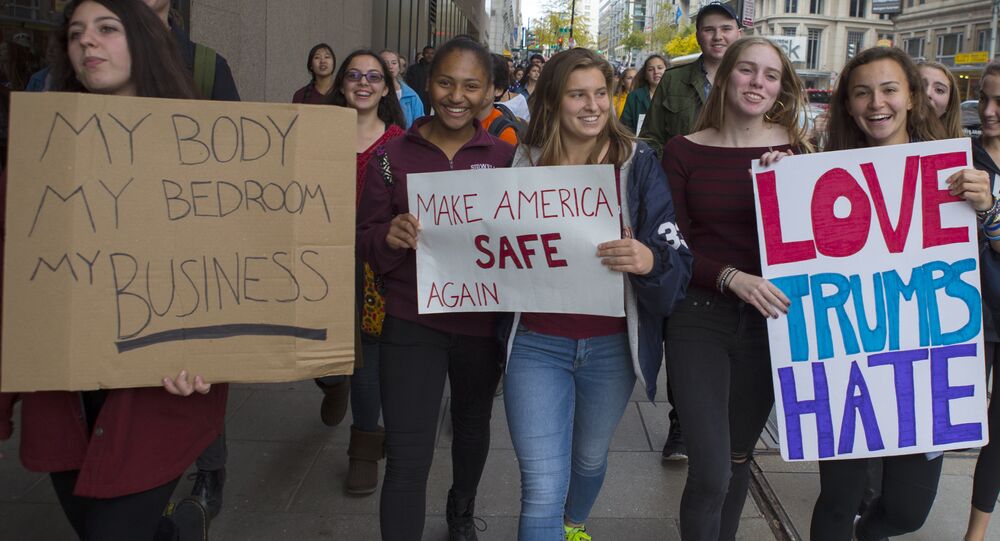 Students in Washington DC and other cities around the nation are again leaving school to protest the results of the US presidential election.

In Rockville, Maryland, just outside of the nation’s capitol, students at Richard Montgomery High School left classes around 10:00 AM to march to the courthouse to rally. The students carried printed signs reading “stronger together.”

Approximately 100 students walked out to protest, chanting “love trumps hate,” but the message seems to have been lost as a 15-year-old teenager was attacked and injured by student protesters shortly after the march began. The victim was receiving assistance from police at around 10:15 AM, and was taken to the hospital in an ambulance.

“They jumped him and beat him up pretty bad,” Max Stucky, a bystander who witnessed the attack, told WTOP. The victim had been wearing a hat supporting Trump when he was surrounded and attacked by at least four students.

No arrests have been made over the attack.

Arriving at the courthouse, the students gathered on the steps and chanted “not my president.”

The Montgomery County Public School district told Bethesda Magazine on Wednesday that they had offered a space on the school campus to protest, but the students elected to march in the streets anyway.

After protesting for approximately an hour and a half, students marched back to the school.

© AP Photo / Nick Ut
Mass Student Walk-Outs Across US Protest Trump Election Win
On Tuesday, students from Woodrow Wilson High School in Washington DC left their classes and went to Trump Hotel to protest. They were joined by faculty with signs that read “proud teacher,” though DC Public Schools had ordered their staff to stay at school and urge their students to do so as well.

On Monday, students in Silver Spring, Maryland, also walked out, and the Montgomery County School District said in a statement that those without a note from a parent would be subject to disciplinary action.

In Florida on Wednesday, students from at least six high schools and two universities walked out of their classes in protest of president-elect Donald Trump’s promise to deport up to three million illegal immigrants who have been arrested for criminal activity. The students planned to march to Homestead City Hall and demand that they become a “sanctuary city.”

Many students have been pushing for their areas to be made into “sanctuary cities” to resist deportations, and the movement has been successful in Chicago.

"To all those who are, after Tuesday's election, very nervous and filled with anxiety as we've spoken to, you are safe in Chicago, you are secure in Chicago and you are supported in Chicago," city mayor Rahm Emanuel told reporters. "Chicago will always be a sanctuary city."

Most Americans Think Trump Has No Mandate for Pursuing Policy - Poll