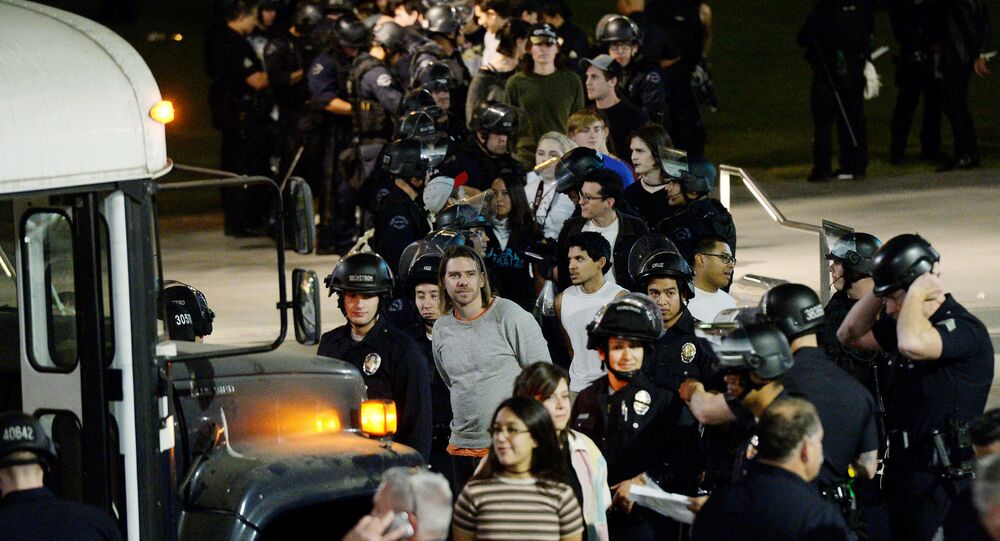 © REUTERS / Jim Urquhart
#NotMyPresident: Inauguration Day Protests Will Greet Donald Trump
The United States often has something to say when voters in other countries take to the streets to protest against election results. However, the anti-Trump protest seems to be going on without any significant criticism from the US authorities and media.

Despite outspoken US police brutality, this time even law enforcers almost completely refrained from using force against the protesters.

Radio Sputnik discussed the anti-Trump protests across the US with David Carter — Professor in the School of Criminal Justice and Director of the Intelligence Program at Michigan State University, a former Kansas City, Missouri police officer.

Answering the question of how consistent Washington is in its response to the protesters at home and the ones that take place abroad, the expert said: "It always depends on who is in power or where the protests occur."

So, the United States seems to follow a double-standard approach when it comes to protests in certain countries.

"It kind of depends of where it is, who is in law or what the political relationship was with the other country as well as the political structure in the US at the time," Carter told Sputnik.

© REUTERS / Eduardo Munoz
Dozens Arrested in Massive Anti-Trump Protests in New York City
Republican Party nominee Donald Trump emerged as the winner in the US election. Following the announcement of the results, people across the country took to the streets, chanting such slogans as "Donald Trump go away" and "Not my president".

On Thursday night, at least 26 people were arrested in Portland, and over 180 people were taken into custody in Los Angeles. Many people are still ashamed to publicly reveal who they voted for in the recent election.

Commenting on the issue of how the new US leadership will cope with such a huge social divide in the country, the expert noted that sooner or later many people will grow to accept or even like Trump as it was in the case of Ronald Reagan.

"You know the saying: time heals all wounds. I think much of the shock will wear off and people will grow to accept that," the expert concluded.

One Person Shot During Anti-Trump Protest in Portland - Police