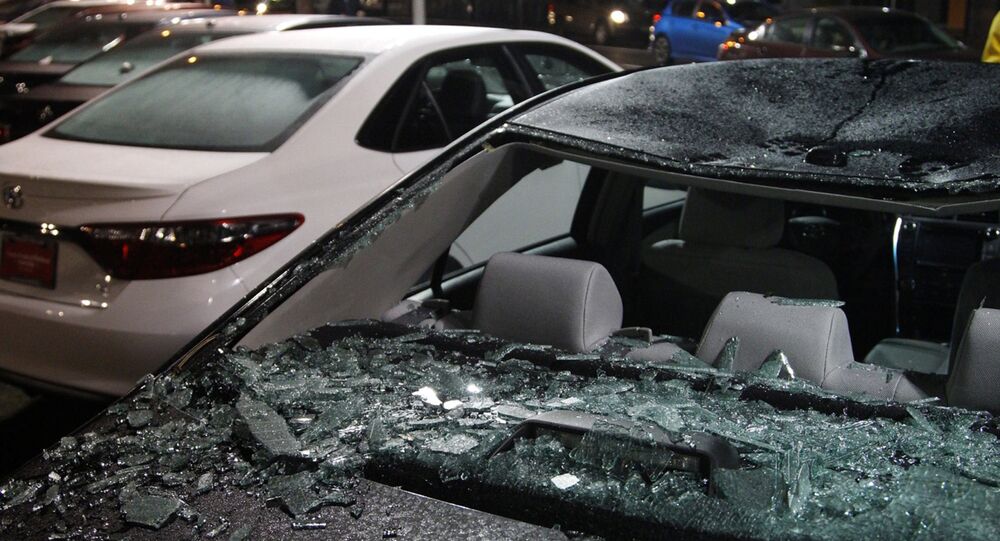 According to reports, police in the US state of Oregon's largest city of Portland have begun intervening in what began as peaceful demonstrations of some 4,000 people.

© Sputnik / Tatiana Lukyanova
New York's Trump Tower Becomes Security Nightmare for Police
PORTLAND (Sputnik) – Police in the US state of Oregon's largest city of Portland have begun intervening in what began as peaceful demonstrations of some 4,000 people, telling protestors to return to the central square in the center of the city, now calling the demonstrations a riot.

Portland is experiencing the third day of demonstrations after Donald Trump won the presidency.

At least three individuals have been detained.

Demonstrators have thrown rocks and used bats to destroy cars. Live video footage from KATU News showed a car dealership's cars with their windows busted out.

The anti-Trump protests in Portland, Oregon are considered riots due to their violent nature, the Portland police said earlier in the day.

"Due to extensive criminal and dangerous behavior, protest is now considered a riot," the Portland police said on their Twitter page around 9:00 p.m. local time on Thursday (05:00 GMT Friday).

The police reported property damage and advised peaceful protests to move to the Pioneer Square, away from the vandalized area, so that the law enforcement could arrest the rioters. The police also warned people that some of the protesters were arming themselves with rocks, gas and flares.

Participants of the peaceful protest that began at 5:00 p.m. at Pioneer Square have begun returning to the central square immediately succumbing to the police's demand to return to the square if they would like to continue their protest.

Portlanders have expressed concern as to why the National Guard had not been called to suppress the demonstrations in the city.

"No, we did not turn to the National Guard," Portland police spokesman Pete Simpson said on KATU News, adding that the original protestors were not seen as violent, but "a few anarchists" appeared in the crowds.

"Crowd is heading down eastbound on Jefferson in Downtown. Estimated about 1,500 people," the Portland police said on their Twitter page around 11:00 p.m. local time on Thursday (07:00 GMT Friday) adding 20 minutes later that the protesters reached Portland Plaza where "more vandalism" was occurring.

On Wednesday evening, protestors blocked I-5, a six-lane highway that runs from Canada to Mexico and goes directly through Portland.

The protests in Portland have been going on since Wednesday when Republican Party nominee Donald Trump emerged as a winner in the US election, triumphing over the Democratic Party candidate Hillary Candidate who was considered a favorite by many pollsters and analysts.

Trump secured 290 Electoral College votes, which is more than 270 required to win the presidency, but ceded to Clinton in a popular vote, although by a very thin margin of 0.3 percent.

Two Police Officers Shot in US State of Pennsylvania