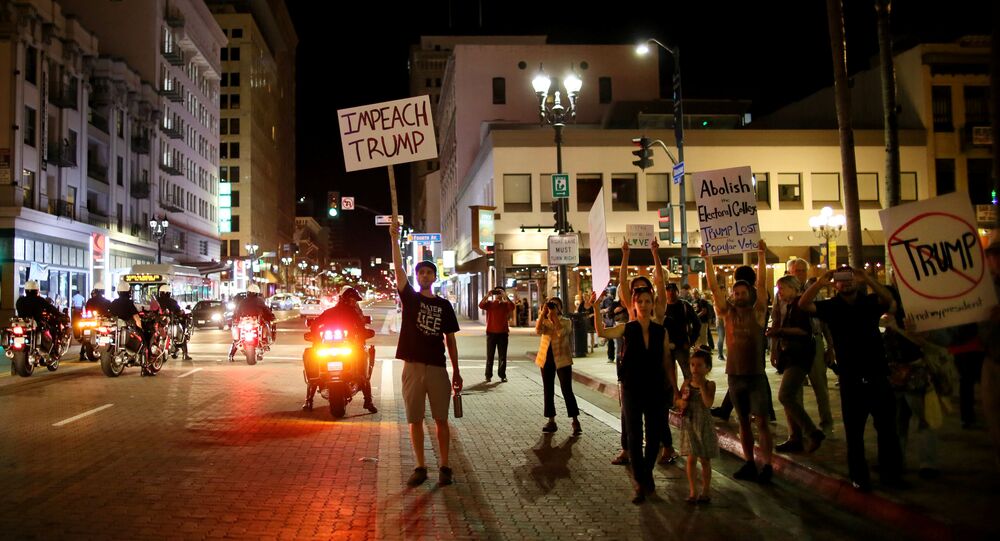 Wednesday night saw tens of thousands of protesters fill the streets in cities coast to coast, from Los Angeles to Chicago to Philadelphia to New York.

Crowds were beginning to gather again as the sun was setting in Philadelphia.

Hundreds of demonstrators gathered in Baltimore as well, where there were reports of at least one arrest.

Growing crowds chanted anti-Trump slogans on the campus of the University of Minnesota, in Minneapolis, where thousands were marching.

Also in the Midwest, protesters gathered in Columbus, in the state of Ohio, for the second night.

On the West Coast, as the Thursday afternoon rush hour got underway in Los Angeles, crowds blocked traffic on one of the city's major thoroughfares.

Crowds of young people also gathered in front of the Trump Hotel in Washington, DC.

​A group of protesters gathered in downtown Dallas, Texas. The local newspaper "The Dallas Morning News" reported on Thursday that demonstrators were advocating against distraction and violence which they claimed come with Trump's presidency.

Demonstrations began in cities across the country early Wednesday morning, within hours of the announcement that Trump has pulled off a surprise win in the Electoral College over rival Clinton, whom many assumed would win the contest easily.  Clinton is believed to have won the popular vote, though final tallies are still underway.

Many in the US were put off by Trump's campaign rhetoric, which often included divisive and derogatory comments about minorities and women. The president-elect's proposals to overturn Barack Obama's work on health care and immigration reform have also alarmed many US progressives.