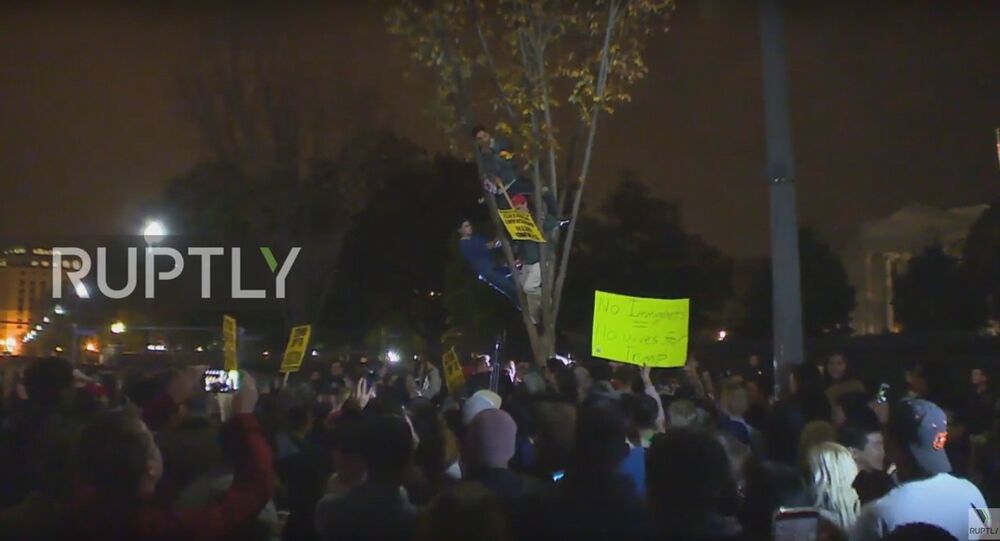 Protesters gathered on Washington’s Pennsylvania Avenue, five blocks from the White House, to rally against the election of Republican Donald Trump as US president.

WASHINGTON (Sputnik) — Standing outside the recently opened Trump International Hotel, demonstrators on Wednesday chanted, "Not our president" and "Black lives matter.” They also placed a poster on the hotel depicting Trump with the word "Hate."

© AP Photo / Ted S. Warren
#NotMyPresident: Angry Americans Take to Streets in Protest of Donald Trump Win
Earlier in the day, a group of students from American University in the US capital staged an anti-Trump protest and burned an American flag.

On Wednesday morning, within hours of Trump’s declaration of victory in the election held Tuesday, demonstrations took place across the country, including New York City and the states of California, Oregon and Washington.

A group of protesters also gathered in front of the White House in Washington, DC.

Trump secured more than the 270 Electoral College votes required to win the US presidency, triumphing over Democrat Hillary Clinton, who won the popular vote with the support of 59.6 million people.