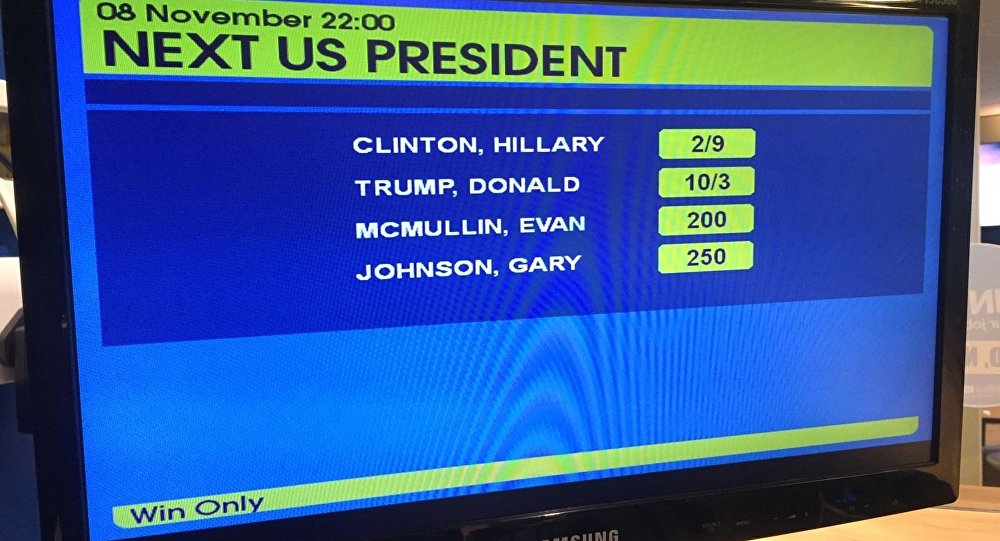 The bewildering twists and turns of the 2016 US election has created a frenzied free-for all in gambling. Punters across the world have thrown down huge sums of money. As the dust settles on Trump's win, UK gambling giant Ladbrokes has told Sputnik that this year's US contest was their biggest non-sporting gambling event ever.

At one point, Ladbrokes reported that intense interest in the US election from Brits generated an incredible 35 bets a minute throughout Tuesday (November 8) night.

The #Unbelievable treble that could have landed you just over £4.5m… https://t.co/vpyYiqzXCT pic.twitter.com/3tjoahw4Ys

Jessica Bridge of Ladbrokes told Sputnik of the astonishing furor that the Trump-Clinton showdown caused.

"It was a busier night than both our [UK] General Election and the Brexit vote, easily making it the biggest non-sporting event we have ever witnessed."

The night-owl spending will leave a costly hangover for many Brits who did choose to gamble, because 80% of the money bet, had been banking on Clinton clinching the White House. Indeed, most of the political polls had been predicting a Clinton Presidency.

Polls said Clinton would win, then #Trump came in with a clothesline, outta nowhere! pic.twitter.com/lxXkxRWYFm #ElectionNight Via @WillHillAus

That will be of little comfort to the one online customer who wagered a staggering US$148,000 on Clinton, at odds of 1/6, late on Tuesday evening.

But as Ladbrokes' Jessica Bridge noted: "Betting on political markets continues to soar and spring surprises."

Leicester, Brexit, and now President Trump… Everyone running to the bookies to put money on Honey G 🙈 haha! #ElectionNight pic.twitter.com/Z5vJZfZVjV

In the early hours of Tuesday (November 8) evening, Ladbrokes had Mrs. Clinton's odds at 1/10. However, before long, Trump became the overwhelming favorite as swing state results continued to called in his favor.

It's a far cry from the dismissive reaction to when Trump initially declared he was running for president, back in 2015. He was initially chalked up at 150/1.

When you go from 150/1 to becoming the new President of the United States… #USElection2016 pic.twitter.com/07CuWbenr4

According to Ladbrokes, this now makes the Republican President-elect the biggest upset in political betting history — an accolade Labour leader Jeremy Corbyn once held as the 100/1 outsider to win the 2015 Labour leadership contest.

First Brexit, now Trump, should I put everything on @jeremycorbyn? Just asking the bookies and pollsters for a friend.

However, despite most of the total money having been for a Clinton win, interestingly, Ladbrokes has revealed that 75% of individual wagers on the race to the White House had backed Trump.

It means that bookies may stand to lose big despite the majority of the money being bet on Mrs. Clinton. Over 50,000 bets were placed with Ladbrokes alone, across the entire US Election market.

Not placed a bet on this election for a simple reason. I'm afraid after Trump wins, the bookies will go bankrupt and I'll never get paid.

For those who missed out on betting on a Trump win this time round, Ladbrokes already has his 2020 odds of being re-elected as US President.

What Are the Odds? Big Bucks at the Bookies as US Election Bets Heat Up in UK

Cry Me a River: 'Democrat Tears' Being Sold on eBay in the Wake of Trump Victory