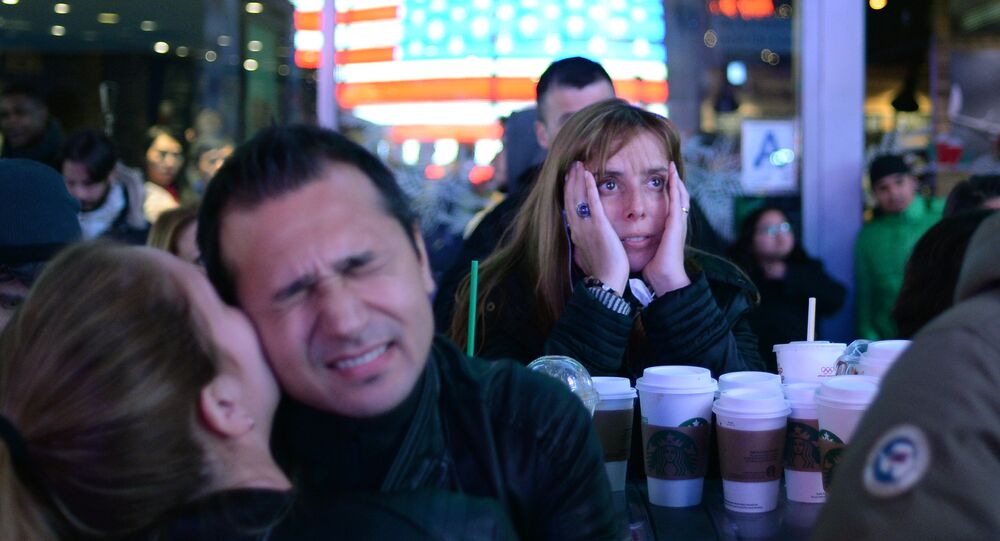 'Middle-Class White American Revolt': How the Polls Got the US Election so Wrong

First they miscalculated the results of the Brexit referendum in the UK, now they have been entirely wrong about the presidential vote in the US; Russian political analysts explain to Sputnik what pollsters have missed when forecasting the results of major US elections and UK vote.

Nearly all the US state and national polls suggested that Hillary Clinton was the hot favorite to win the presidency. Only a couple of days prior to the vote, an in depth study by the Politico news source and technology company Morning Consult insisted that "an army of hidden Trump supporters is unlikely to materialize on Election Day."

Russian political scientists explained to Sputnik why the pollsters got it all wrong.

"The voter turnout played the major role in the final results of the US vote," Gevorg Mirzayan, an assistant professor of the Political Science department at the Financial University in Moscow, told Sputnik.

"The Republican presidential contender had convinced his voters to go to the polls. In fact, it is not the one who gets the majority of support, but the one who convinces his electorate to actually come and cast the vote, who eventually wins. And Trump has succeeded," he explained.

The second factor is one which was ruled out by Politico, which is the so-called "Shy Trump" voter. The recent vote mirrored the Brexit referendum in the UK, the political scientist explained. Then it was simply "indecent" and "improper" to publicly voice support for the exit from the European Union.

When pollsters questioned the voters they simply answered what they were expected to: either they were against Brexit or they were still undecided. However, when they came to cast their votes they voted with their hearts – for the UK to leave the EU.

A similar thing happened in the US presidential elections, the analyst said. The people were forced to believe that it was "indecent" to vote for Trump and so simply concealed their true preferences. This made them even more motivated to come to the polls in protest.

Another aspect is that US African-Americans were in favor of Hillary Clinton, however the majority of them did not come to the poll.

All the above led to Trump's victory, Mirzayan said.

"This new realia is often referred to as the "Rust Belt": where in traditionally "democratic" states of the US there is an emerging population stratum due to economic decline, population loss, and urban decay caused by the shrinking of its once-powerful industrial sector," he explained to Radio Sputnik.

He cited as an example the state of Michigan, home to Detroit city.

This is America's new face, he said: white working-class men of the Rust Belt, left forgotten with no one to defend their interests.

"However Donald Trump overcame all the barriers of the Republican ideology and addressed these very people," Mezhuyev said, adding that the Republican presidential contender had delivered on his initial promise to expand the electorate of his party.

"He travelled along Michigan, Wisconsin and other states. And it paid off. Even in Pennsylvania the majority voted for Trump," he said.

He also echoed the opinion of Gevorg Mirzayan by saying that people were simply shy to voice that they supported Trump, that they changed their political views and gave up on the party which their ancestors had always voted for.

However, he said, pollsters have incorrectly labelled these people as undecided voters.

Meanwhile Gevorg Mirzayan lays all the blame on the US mainstream media and CNN in particular.

"Throughout the entire presidential race CNN was active in forcing its viewers to believe that Trump is the worst candidate, a betrayer and bringing up the feeling of hatred towards the candidate," he told Sputnik.

However by doing so they achieved the opposite results: they forced people to conceal that they intended to vote for Trump, and in so doing, muddied the waters for the polling companies.

© Sputnik / Jeenah Moon
Supporters of the Democratic candidate Hillary Clinton at the Jacob K. Javits Convention Center in New York follow the vote counting in the US presidential election

The political scientist has called it a revolt of middle-class white Americans against impoverishment and the fading image of the good old America, the country where everyone was responsible for their own fate and could earn a million US dollars.

And this revolt and rejection symbolize the shift in conscience of the American society, he finally stated.