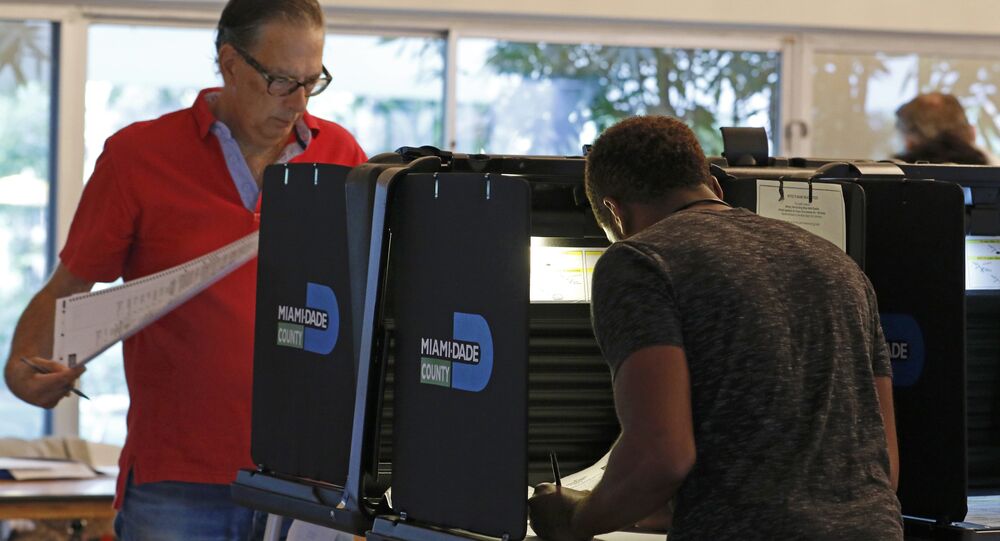 Speaking to Sputnik about the US presidential election, Thomas Whalen, associate professor of social science at Boston University, explained that this cycle, both major parties faced a 'kind of revolt against the political establishment'. However, if Donald Trump is to have any chance of winning, he really has to take Florida.

Today Americans are taking to the polls to elect the next president of the United States in an election that can only be described as historic. Speaking to Sputnik, Dr. Thomas Whalen explained that for the anti-establishment candidate to win, he must win Florida.

This election, according to the professor, has been "really kind of a revolt against the establishment in both parties. We started with the Democratic Party primary, with Bernie Sanders coming close to overturning Hillary Clinton's nomination bid. Then Donald Trump just completely overturned the Republican field, and bested Jeb Bush, who was considered the favorite going into this election season."

With much of the country heavily divided along party lines, the election is again coming down to several swing states, including North Carolina, Virginia, Pennsylvania, Ohio and Florida. The latter in particular is crucial to the Trump campaign if it is to have any sort of shot at the presidency, according to Whalen.

"If Trump cannot win Florida tonight, he can't win the presidency," the professor stressed. "There is no kind of viable path to the presidency [otherwise]. But Florida has a Latino population which has grown, particularly with the influx of Puerto Ricans, and a second generation of Cuban Americans who are kind of going against the grain of their parents and grandparents and voting Democratic. They might be able to flip Florida into the Democratic column. If that's the case it'll be an early night for Donald Trump."

© AP Photo / Jim Cole
US Presidential Election 2016: Live Updates
"Trump has to basically win all the states that Mitt Romney did in 2012," plus "a couple of decent size democratic states like a Pennsylvania, like a Michigan."

Changing demographics aren't necessarily a handicap for Trump, either, the professor explained. "Asian Americans have been quietly growing in numbers; they are about 5% or even more of a general electorate. It just shows overall the rich diversity that this country has now, and its changing voter dynamics. Former Democratic states might turn red, and vice versa."

Commenting on the record early voting this year, Whalen suggested that people's willingness to vote early is an indication of "just how politically divided this country is…Over a third of voters have already voted in this election."

Ultimately, the professor suggested that "in the future the United States should really think about election reform, maybe making election day a national holiday, making that 'President's Day' to guarantee as many people go to the polls as possible. Then you wouldn't necessarily need early warning…Why not? This is arguably the most critical position on the planet; the most powerful office on the planet. Why not make it easier for as many people as possible to determine who is going to be the leader of the world?"

Clinton Leading Over Trump by 2.7% in Colorado Based on Early Votes

Clinton Leading in Florida, Iowa, Nevada, Ohio, Behind in Pennsylvania