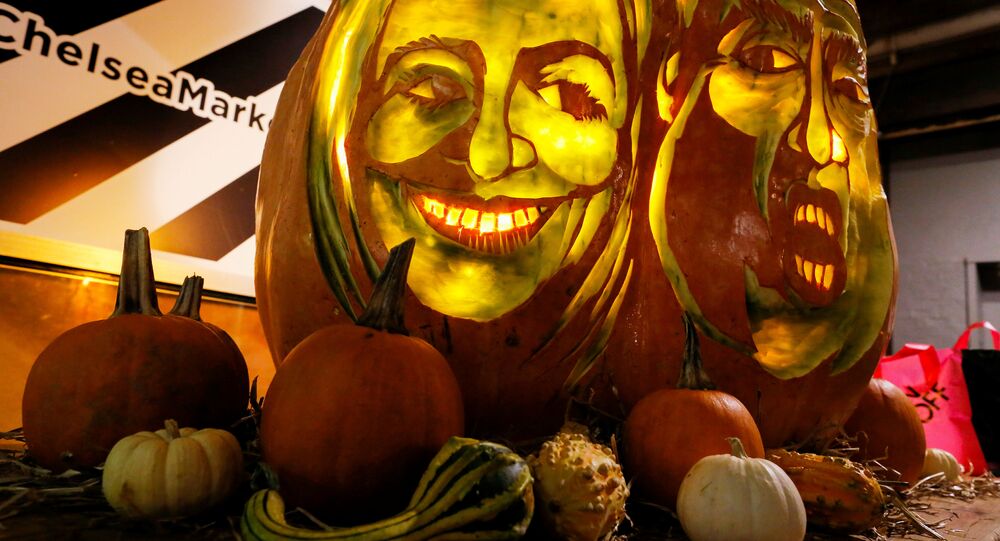 The most awkward moments of US presidential elections campaign, including clumsy, curious and amusing situations involving the contenders.

WASHINGTON (Sputnik) — The grueling US pre-election marathon is coming to an end, with politicians and ordinary US citizens growing tired as a result. Apart from heated debates, the 18-month election race will go down in history for its numerous awkward moments, including clumsy, curious and amusing situations involving the contenders.

Each of the candidates had one’s share of awkward moments during the race. Many situations instantly went viral and attracted much more attention than the politicians themselves.

For example, bloggers actively discussed an unsuccessful attempt of Democratic Presidential candidate Hillary Clinton to enter a New York subway station. She decided to dismiss jeeps with Secret Service agents, but her campaign staff forgot to tell her how turnstiles operate in the city where she had worked for several years. The candidate simply slammed into the turnstile after forgetting to swipe her travel card.

© AFP 2021 / KAREN BLEIER
‘Change We Need’ in Syria From Next US President
The next time Clinton felt awkward was when a rapper went on stage after her speech and suggested that she dance hip-hop with him. Although the movements were rather slow, the former secretary of state was unable to hit the rhythm.

Clinton's party fellow Bernie Sanders failed an even easier task and was unable to knock fists, a popular greeting among African-Americans, with rapper Killer Mike during an interview; he missed Mike’s fist several centimeters away.

Rafael Edward "Ted" Cruz, who wanted to be a candidate of the Grand Old Party (GOP), once decided to hug a supporter onstage hitting his wife Heidi Nelson’s face with an elbow.

Cruz also released a video clip featuring praise from Phil Alexander Robertson, an American professional hunter and reality television star on the popular television series Duck Dynasty. In the video, Cruz is wearing a camouflage suit, and his face is painted black, like that of John Rambo from the famous "Rambo" movie franchise, and he is also shooting ducks. The public had every reason to ask whether duck hunting was a good reason for Cruz to be the country's president.

© AFP 2021 / Mandel Ngan
Trump Just Two Points Behind Clinton After FBI Reopens Email Probe
While addressing indifferent voters, Jeb Bush, who turned out to be a rather unpopular Republican candidate, begged sadly with them to applaud, in a display of eloquence.

Donald Trump, who succeeded to win the Republican presidential nomination, showed his "profound" knowledge of the subtleties of the US executive branch and voiced an intention to eliminate "the Department of Environment Protection," his term for the Environmental Protection Agency, as a cost-cutting measure.

This statement merely caused dismay, but many Americans were forced to tell their children not to watch TV during a debate between Trump and his Republican rival Marco Rubio.

It all began with the eccentric billionaire calling his opponent "little Rubio." Rubio fired back by saying that Trump had small hands for his height. "And you know what they say about guys with small hands," Rubio said.

"Look at those hands, are they small hands?" Trump, the front-runner for the GOP presidential nomination said, raising them for viewers to see. "And, he referred to my hands — 'if they're small, something else must be small.’ I guarantee you there's no problem. I guarantee."

In this connection, voters noted that the conversation between the two Republican politicians resembled a "whose-is-bigger" argument between two boys in a locker room.

The final debates became the last stage of the election campaign and stole the spotlight. Suffice it to say that the first face-to-face Trump-Clinton debate was watched by an audience of 80 million, an all-time high.

But TV audiences did not simply follow candidates’ policy statements and their critical remarks directed at one another. They also assessed their behavior, facial expressions and body language. Both candidates gave journalists an opportunity to compile an entire collection of awkward moments, with bloggers discussing all this online.

During their second debates, both contenders were allowed to walk freely about the studio, instead of just standing on the catwalk. Clinton walked about the hall with a microphone in hand, the way an experienced TV show host does. Trump did not want to stay on the sidelines and started following the Democratic candidate with a stern expression on his face. He looked like a horror-film villain stalking the victim from behind.

© CC BY 2.0 / The U.S. Army / US Troops in Afghanistan
Clinton, Trump Lack Viable Alternatives to Reverse Trajectory of Afghan War
NBC Channel parody authors liked this situation so much that they included it in an episode when actor Alec Baldwin posing as Trump "chases" his victim, actress Kate McKinnon starring as Ms. Clinton.

Both candidates like to speak simultaneously, interrupting each other. This served as a basis for another humoristic parody. Video of the debate was superimposed on the famous song "Time of My Life," and this gave the impression that, instead of arguing, both politicians were performing this romantic song together.

Apart from harsh polemics between the two irreconcilable opponents, the debates attracted some completely unexpected personalities who "starred" in numerous media stories and even became Internet memes.

For example, social media users actively discussed a fly that landed on Clinton’s eyebrow during a debate. Indicatively, she continued to talk without noticing the insect that flew away several seconds later.

The incident spurred numerous comments from Twitter and Facebook users and became one of the most widely discussed issues after the TV debates. Several special Twitter accounts were even created for the fly.

Pixabay
Trump Presidency to Hamper Int’l Ecological Cooperation - Norwegian Green Party
Audiences also appreciated and fell in love with Illinois resident Ken Bone, an uncommitted voter who asked both candidates a serious question about the US energy policy. The jovial bespectacled man with a wandering half-smile on his face, as well as his delightful red sweater that contrasted with what everyone else was wearing at the studio, won everyone’s admiration.

"I had a really nice olive suit that I love a great deal," Bone shared, indicating that he wanted to wear the suit during the debate. "When I went to get in my car the morning of the debate, I split the seat of my pants all the way open because I eat like an athlete, but I don't work out like one."

Naturally, the election race became a source of countless jokes from creative and enterprising people.

For example, an ice cream company started making the ‘Bernie's Yearning’ ice cream flavor showing the 74-year-old presidential candidate Sanders. His campaign headquarters supported this initiative in the hope that it would attract more voters.

Sabo, a famous street artist from California, who supports Cruz, also pitched in his election campaign.

The artist released a series of composite photos showing half-naked presidential contenders with numerous tattoos. Sanders, a self-described democratic socialist, was covered with hammer and sickle tattoos and the inscription "Save & Protect" in Russian. Clinton posed with a $100 note on her entire hand and the skeleton of an infant, an allusion to her connections with big-time business and support for abortions.

© Sputnik
How Do Trump and Clinton Really Feel About Asia
On the contrary, Cruz posed as a macho with an eagle on his chest and a cigarette in his mouth. The only reply made by the then-candidate was that he did not smoke.

It should be noted that Trump and Clinton, as two main contenders of the race, preferred to release videos with a serious content either extolling themselves or criticizing their opponents during the campaign. Quite possibly, these politicians decided to steer clear of humor, so as to minimize awkward moments.

UK Magazine The Economist Endorses Clinton for US President

‘Change We Need’ in Syria From Next US President

Ahead of US Presidential Elections, October Gun Sales Set Yet Another Record