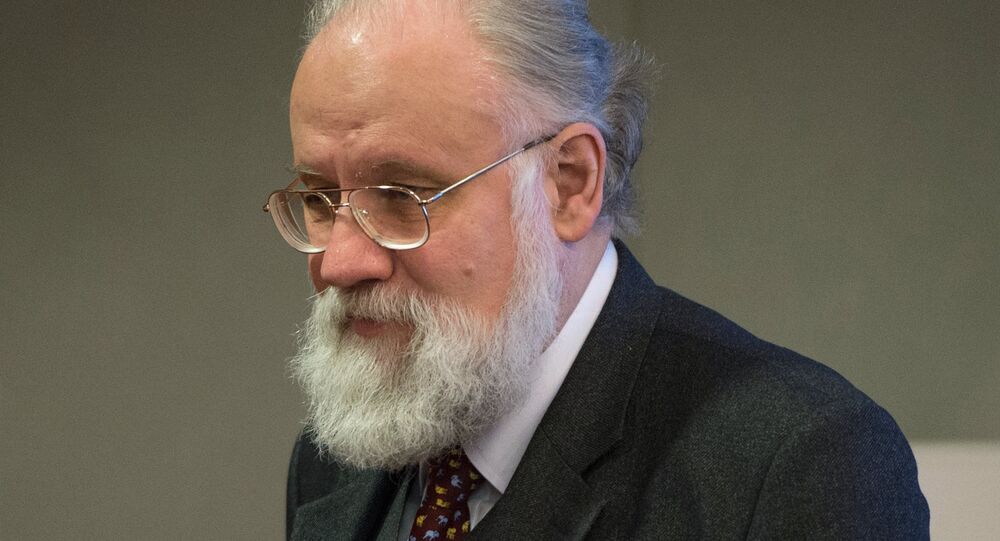 For the first time, foreign election observers will cast their eyes on the US presidential vote. Commenting on the decision, the Russian Foreign Ministry's ambassador-at-large Vladimir Churov noted that the international election observation is one of the widely accepted democratic standards.

MOSCOW, October 24 (Sputnik) — International observers can objectively assess the November 8 presidential elections in the United States if Washington complies with all Organization for Security and Co-operation in Europe (OSCE) commitments, Churov said Monday.

In 1990 the US government committed to inviting International Observers for its national elections, as did all the other 57 Participating States in the Vienna-based Organization for Security and Co-Operation in Europe (OSCE), which arose out of the Helsinki Negotiations in the early 1970s.

© AFP 2020 / Frederic J. BROWN
A child walks past a display of masks of US President Barack Obama, and presidential hopefuls Donald Trump and Hillary Clinton, for sale at a shop selling Halloween items in Alhambra, California on October 21, 2016

"This year, for the first time in its history, the US has voiced its intention to honor its commitment to the agreement and invited 400 members of the Office for Democratic Institutions and Human Rights of the OSCE to monitor its elections. Each member state of the Office has its national quota on how many observers to send to the elections," Churov said.

However, the OSCE documents require the host country to fulfill not only its commitment to invite the international observers but a number of other certain conditions.

"If this whole set of obligations is fulfilled, then the observation mission makes sense and will be able to obtain objective results and objectively assess the campaign and the vote," Churov said.

The host country should also organize the meetings with the representatives of the executive, legislative and judicial powers at the federal and local levels, the candidates, representatives of all political parties, civil society, mass media and any other person and groups chosen by the monitors,

It should also provide free travel opportunities to all the regions of the country prior, during and after the elections, without any imposed restrictions, as well as free access to all the constituencies, election commissions, votes counting centers and results processing centers.

© AFP 2020 / Karen BLEIER
Russia Can't Change US Vote - Ambassador-at-Large Churov
Until now, Churov said, the US has pursued a totally different policy towards the international observers. There were many disputable decisions made by the prosecutors of certain states and other public officials. Therefore the monitoring mission will be a success and will be able to get any unbiased results and provide an unbiased assessment only on condition that the US complies with all the above requirement.

Russia's ambassador-at-large also noted that all the monitoring missions should be provided security as the world, unfortunately, is no longer a safe place thus the US should comply with this requirement as well.

"We get daily reports of various incidents, so we would like for the US to fulfill this condition in relation to international observers. Otherwise it makes no sense to go and formally assist in fulfilling international obligations," Vladimir Churov told RIA Novosti.

Russian Deputy Foreign Minister Sergey Ryabkov said Saturday Russia chose to conduct the observations independently of the Office for Democratic Institutions and Human Rights (ODIHR) mission of the Organization for Security and Co-operation in Europe (OSCE) because Moscow did not fully agree with some of the ODIHR criteria for drafting final reports of such observations.

"Full security has to be provided to all international observer missions, if they are invited, not only the ODIHR," Churov stressed.

On October 21, US Department of State spokesperson John Kirby said that Russia should have joined the international observation mission to monitor the US elections. He also said the State Department could not influence the authorities of Texas, Louisiana and Oklahoma, who earlier refused to let Russian monitors observe the elections, as these decisions were always made on a state level.

The Russian embassy in Washington said that the Russian diplomats were not only denied access to the elections but also warned of the possibility of criminal charges if they appeared at the polling stations.