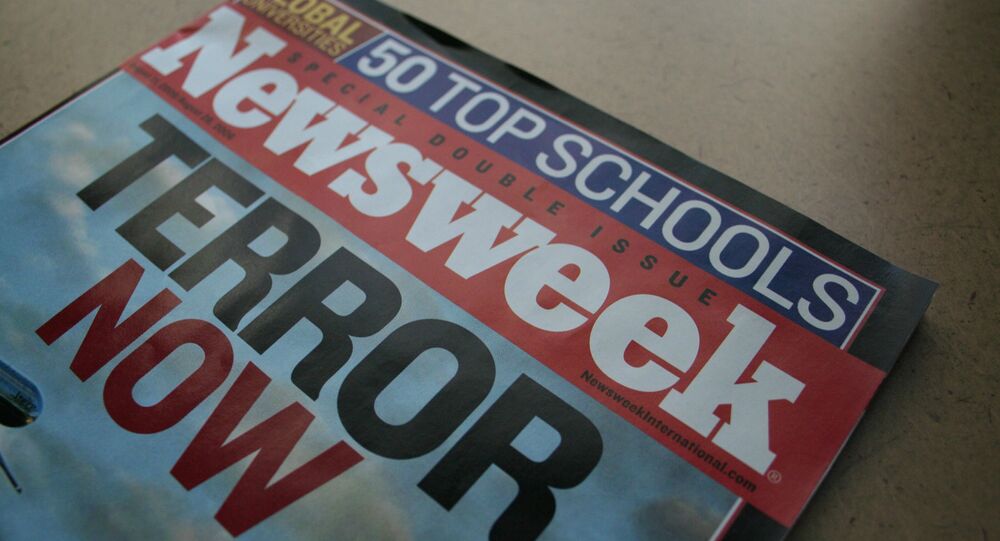 An error made by a Sputnik News editor has revealed shocking information that US intelligence agencies may actively be trying to manipulate the presidential election, while also spying on Sputnik’s staff of US citizens.

© Flickr / Jonathan
Glenn Greenwald on How US Media Got Caught Up in McCarthyite Anti-Russian Hysteria
Last week, a 29-year-old American writer and editor for Sputnik News was duped by a viral — but out-of-context — screenshot from the WikiLeaks release of Hillary Clinton campaign chairman John Podesta’s emails. The screenshot contained an excerpt from a story on Benghazi by Newsweek columnist Kurt Eichenwald, misattributed to Hillary Clinton’s long time confidante Sidney Blumenthal. The Sputnik writer, Bill Moran, jumped on what he thought was a scoop, and published an article based on the misattribution.

Moran realized his error less than 30 minutes after publication and quickly deleted the story, which had accumulated around 1,000 views. It was an honest mistake.

By the time the story was pulled, however, the same viral tweet had made its way to someone in Donald Trump’s campaign, and the candidate quoted the screenshot at a rally that day in Pennsylvania, claiming that Blumenthal himself acknowledged Clinton’s culpability for the 2012 attack on the US embassy in Benghazi.

This perfect storm of human error resulted in a new Newsweek piece by Eichenwald, pushing a massive conspiracy theory and accusing Sputnik News — and therefore the “Russians” — of working with the Trump campaign. The story was dramatically headlined, “Dear Donald Trump and Vladimir Putin: I Am Not Sidney Blumenthal.”

“I am Sidney Blumenthal. At least, that is what Vladimir Putin — and, somehow, Donald Trump — seems to believe,” Eichenwald wrote. “And that should raise concerns not only about Moscow’s attempt to manipulate the election but also about how Trump came to push Russian disinformation to American voters.”

Eichenwald was then invited to make the US mainstream media rounds; CNN, NPR and others happily granted him a platform, without reaching out to Sputnik for a comment.

It must be noted that several journalists — many of whom, to put it mildly, don’t always agree with Sputnik — considered it their duty to report inconsistencies within Eichenwald’s story.

Buzzfeed’s John Passantino was quick to point out that Trump was actually reading quotes from the same viral tweets that the Sputnik web editor initially read — rather than from the Sputnik article that appeared hours later.

Glenn Greenwald was also fast to note how ridiculous the entire conspiracy theory would be for anyone who knows how modern newsrooms work — and sometimes screw up, big time.

With “The Trump-Putin Link That Wasn’t,” the Washington Post, hardly the most Trump-friendly or Sputnik-loving outlet out there, called out Newsweek’s reporting for what it was: completely fabricated nonsense.

Yet, when contacted by Moran, who sought to clarify what really happened, Eichenwald blocked him on Twitter.

When I then reached out to Eichenwald, he finally agreed to speak to Moran. This is where things took an interesting turn.

Eichenwald urged Moran in an email not to go public — even offering to get him a job at the New Republic to buy his silence. Even more frightening however, the Newsweek columnist and Vanity Fair editor asserted that his conspiracy theory, which was false, came from US Intelligence officials.

“You need to ask yourself — how does someone like me who is deeply wired into the intelligence community know so fast that you had posted this? It’s not like I was sitting around reading Sputnik. Others are though, and they are not reading it 24-hours a day in real time for the purpose of keeping abreast of the news.”

It appears that Eichenwald is stating that the US Intelligence community immediately fed him this story to push a false conspiracy theory, linking Trump and the evil Russians.

The lengthy email continues on to warn Moran that Sputnik’s US writers — American journalists — are being investigated by intelligence divisions of the FBI.

“I guarantee you one thing: there is already a file on you in one of the security intelligence divisions of the FBI,” Eichenwald wrote. “You have been playing in a sandbox surrounded by very large, and mostly unseen, players, engaged in games you don’t recognize.”

“There are some things I know but I can’t tell you, but what I will say is that, as far as American intelligence agencies are concerned, the event involving this manipulated document is far from over,” he continued. “America is in the middle of a large-scale cyberwar with Russia; if you don’t know this, you need to read the coverage of what is going on, including the statements from the White House.”

Eichenwald then alludes to his willingness to help Moran get a job at another larger outlet, the New Republic, if he would agree to keeping quiet on the Newsweek conspiracy theory.

“What I was going to discuss with you was places you should consider working in Washington — ones that won’t serve to taint your reputation for the rest of your career,” Eichenwald offered.

In response, Moran informed Eichenwald that he would be going public to clarify what had actually happened, as it is the right thing to do, even though Moran no longer worked at Sputnik (his contract was terminated following the initial misattribution.)

“I intend on proceeding forward in the public about things that I know beyond equivocation to be true — that I was the sole writer and editor at the DC bureau for Sputnik on Columbus Day, that I made an honest mistake, smoked a cigarette, and pulled the story 19 minutes later,” Moran wrote.

He then told Eichenwald that all of this could be avoided with a simple correction on his end, as the Newsweek story had opened up his former co-workers — myself included — to slander and attacks that are unwarranted.

“I am, frankly, not doing it for the outlet at all,” Moran wrote. “My colleagues have been blistered with claims of treason, physical threats, and pictures of dead children sent to them. These are just ordinary reporters living in fear.”

Eichenwald, seemingly infuriated with Moran’s unwillingness to play ball, fired back another lengthy response, indicating that it would be his last communication directly with Moran — and that future correspondence would have to go through Newsweek’s lawyers.

“William, I will start off by saying that as I promised, I took you at your word that the events were as you described and reached out to The New Republic on your behalf. They have a political reporter’s job open. But at this point, I can’t attest to your wisdom anymore nor do I completely trust you,” he stated of his quid pro quo offer.

Eichenwald continued to urge Moran to allow his conspiracy theory from US intelligence officials to spread, without public correction, warning him that it would be “career suicide” to explain the truth of what happened:

© AP Photo / Charles Krupa
I Am Vladimir Putin: The First Victim of McCarthyism 2.0

“Until now, I was willing to give you the benefit of the doubt and try to protect you from your determination to commit an act of permanent career suicide. But you seem more dedicated to clearing the name of Sputnik — which is the only thing mentioned in the story — than yourself, who was NOT mentioned in the story,” Eichenwald said.

“I did not cite you as the one who performed the act of incompetence. It is you who wants to step forward and say you were the one who took unattributed anonymous stuff off of the internet and printed it. In terms of damage to your reputation, which is the standard under the laws you are citing, it is YOU who will be doing the damage, since at no point was your name mentioned. If you wish to argue in a court that publishing unattributed, anonymous and false snippets off of the internet is not cause for termination, you can do so.”

Despite Eichenwald’s threats, on Monday Moran published a piece detailing the events that transpired on Columbus Day, and what followed.

Newsweek, until now, has not retracted or amended Eichenwald’s piece, despite Sputnik’s attempts to reach out to them. The New Republic has also not responded to a request for comment.

This leaves us with an open question. Is one of the most famous and respected Washington journalists, who won the Payne Award for Ethics in Journalism in 2006, a liar of epic proportions? Or is US intelligence actively manipulating coverage of the election on behalf of one of the candidates?