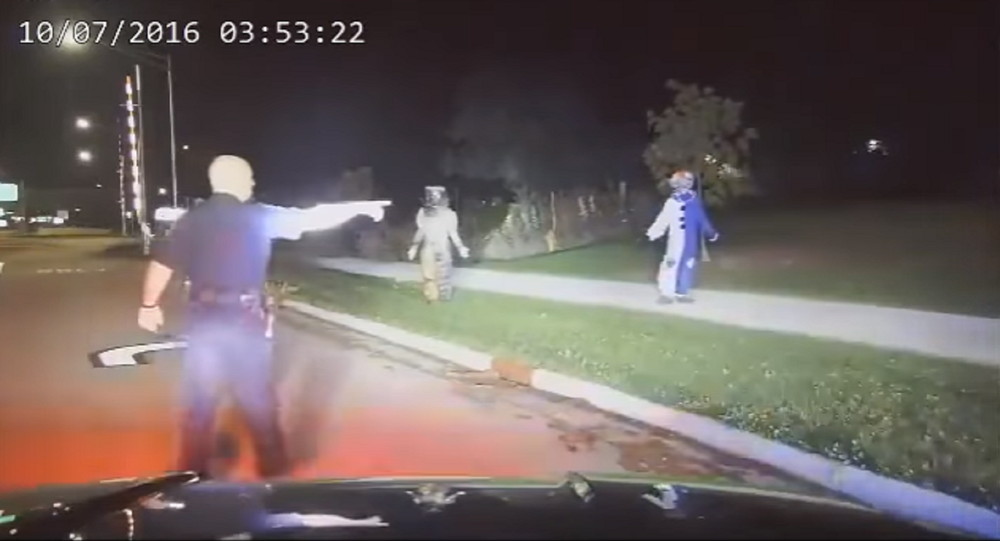 As if 2016 weren’t scary enough, people across the globe are busting out creepy clown costumes and taking to the streets to terrify. The fad has now resulted in the arrest of two parents who left their four-year-old daughter home alone to go clown around and spook drivers.

© Flickr / neal1973
Creepy Clown Craze Hits New Heights of Horror Trolling with #ClownLivesMatter Rally
On Friday morning at around 4:00 AM, two men in Menasha, Wisconsin, were apprehended following 911 calls reporting people wearing clown masks and chasing vehicles on foot. The men, aged 20 and 29, were being driven around by the child’s 26-year-old mother.

The police investigation led them to discover that the woman and the 29-year-old male had left a little girl at home for several hours while they were out harassing people.

“They had left this 4-year-old girl home alone while they decided to go out and do their clowning activities,” Police Chief Tim Styka told WBAY.

Both parents are now charged with child neglect and the 4-year-old has been removed from their home. The woman was also jailed due to a probation violation, Fox 11 reported.

“The child was actually placed outside of the home by Winnebago County Social Services,” Styka said.

“Teenager gets out of the vehicle and says, ‘Can you move so we can drive through?’ At this point the clown presented what turned out to be a real knife and just held it in his hand — didn’t run after the car, didn’t display it like this, just held it,” Ed Slinde of Fox Valley Metro Police told WBAY.

The teen is now charged with disorderly conduct with a deadly weapon.

Earlier in the day, police were also called to nearby Sunset Park over a clown carrying a sledgehammer. The clown was questioned by police, and he told them that the hammer was a plastic prop and that they were playing a game of hide-and-seek.

“We’re very concerned with the public and for these people, that somebody is going to get hurt, and it needs to stop,” Slinde said.

The spooky clown sightings and encounters began in South Carolina in August, and have spread to states across the nation, and to Europe and Australia.