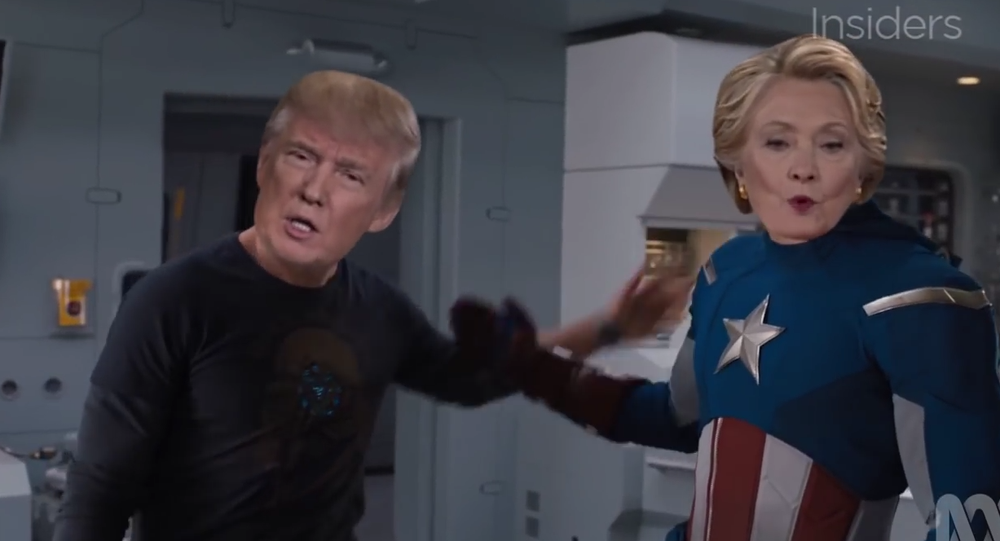 The ongoing presidential campaign in the US has left many wondering whether public politics in the country has turned into a show. Famous Australian political satirist Huw Parkinson has taken this a step further, offering a mash-up video featuring Hillary Clinton and Donald Trump butting heads as Captain America and Iron Man in the Avengers.

In an interview with Radio Sputnik, Parkinson described the stunning mash-up video as "a comment on the sensationalism" of both campaigns.

"Watching [the campaign] from a different country almost feels like you are watching a fictional narrative," the video editor said. "I know it's another country's political story going on there, but in another way it's very captivating."

Clinton and Trump look convincing sparring as Marvel superheroes, but it has taken time and effort to find the right characters to reenact the first debate between the Democratic and Republican hopefuls.

It all started with Trump. Earlier this year, Parkinson published another jaw-dropping mash-up video, featuring the Republican presidential nominee superimposed on various characters from the Game of Thrones' universe. Titled "Winter is Trumping," it has garnered nearly 5.3 million views so far.

Half a year later, Parkinson offered another take on Trump in a video titled "Presidential Avengers: Uncivil War."

"There's a lot of personality," he said, commenting on the ongoing presidential campaign in the US. "It seems to play a lot with hyper real acting that you see in these Hollywood films. [Trump] feels like a character out of a fictional story sometimes. So he is a lot easier to play with than a standard politician. So that was sort of where the temptation came from," he said.

This is not to say that finding the right character for the Donald was easy. Parkinson tried several movies before going with the Marvel Universe.

© AFP 2020 / Brendan Smialowski/Saul Loeb
Paul Ryan Declares Hillary Won Killing Any Odds of a Trump Comeback
"I tried a lot of different things before I got to the Avengers," he said. "I wanted to portray Trump as self-confident, almost arrogant which really fit the Iron Man mold."

It was easy from there.

"When I realized that the counterpoint to that was Captain America, who is really a much more old-school, traditional representation of patriotism, it sort of in another way kind of fit that very traditional mold of Hillary Clinton's campaign," he said.

Parkinson explained that Captain America is "a little bit more of an idealist," which is why he was a perfect choice for the former US secretary of state. "He wears the stars and stripes banner. I can almost imagine that Clinton, if she could get away with it, would wear a stars and stripes costume just to show how much she cares about the country," he said.

You can watch the latest offering from Parkinson here:

Parkinson also said that it "does not feel like a sensible political campaign is being run on either side over there. It does feel like two opposing forces butting heads in different ways. I just tried to represent a few little facets of their personalities as best as I could."