Commenting on the first round of debates between the two US presidential candidates, American political scientist Evan Siegfried told Radio Sputnik what it was all about and what to expect from the next round of presidential debates.

The two clashed over their competing visions of the pressing domestic and foreign matters, with viewers saying the victory was on Clinton’s side.

Radio Sputnik discussed the presidential debates in the US with Evan Siegfried, Republican strategist, commentator and author of the book, 'GOP GPS: How to Find the Millennials and Urban Voters the Republican Party Needs to Survive'.

"These debates were neither for Trump's supporters nor for Clinton's supporters. It was for undecided voters," he told Radio Sputnik.

"They were looking to Trump trying to see can this be somebody I see sitting behind the resolute desk in the Oval Office. Does he have the temperament and the judgment to do it, because they have been a little hesitant to move over to him due many of these comments he made over the course of 16 months he has been in the presidential campaign," the political analyst explained.

With regards to Hillary Clinton, he said, the potential voters really "don't want to move over to her even though they feel she is the safer of the two picks and the more stable."

"It is just because they are sort of done with her. They do not trust her like most Americans," he said.

The expert revealed that 65% of Americans would prefer to have somebody else than the two presidential candidates that they have.

Commenting on the next round of debates, which is going to be the Town Hall Debate, the political scientist called it "a completely different animal."

© REUTERS / Brian Snyder
Trump-alooza and Clinton-chella: If the Two US Candidates Held a Music Festival
The audience is going to be asking the candidates questions, he said. So there is not going to be a moderator and it can't be accused of being in favor of one candidate or the other.

The questioners in the Town Hall Debate are the members of the public, he explained, they are undecided voters and the questions they come up with are only shown to the debate prep staff. They are their own questions, he added, "they are not coached on how to use them."

"Somebody could go to Hillary Clinton like they did in the "Commander-in-Chief" forum and say: "I was in the Navy for years and if I did what you did I would be gone to the federal prison," he suggested.

Or somebody could go to Donald Trump and ask "why do you feel the need to make all these outrageous comments. It does not help us."

If one of the candidates gets upset or seems snappy at the members of the public that could really hurt them, Siegfried said.

He further explained that this is an election cycle where most people dislike both candidates and they don't know which way they are going to vote.

They do want to see changes in the government but they "don't want to see Donald Trump being that change." 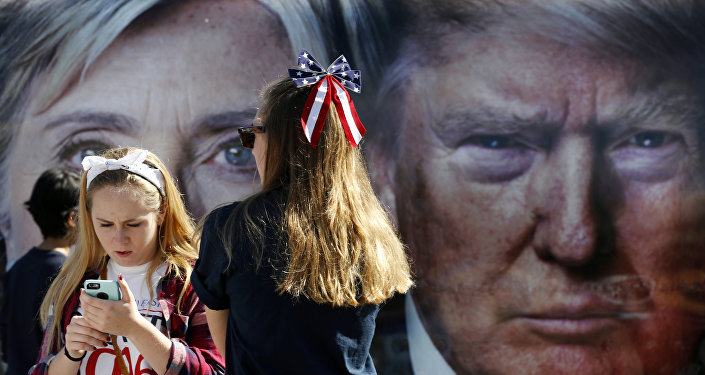 © AP Photo / Mary Altaffer
Trump Tell American People to ‘Follow the Money’ on Trail of Clinton Corruption
They obviously don't like Hillary Clinton. They "think she is dishonest and self-serving."

They are really trying to figure out which way to go, he said. Thus the questions "won't be that scripted."

"You are going to see Donald Trump and Hillary Clinton have some moments where they might get knocked back on their heels by a question," he suggested.

"However this is a good and healthy thing for democracy," he finally stated.