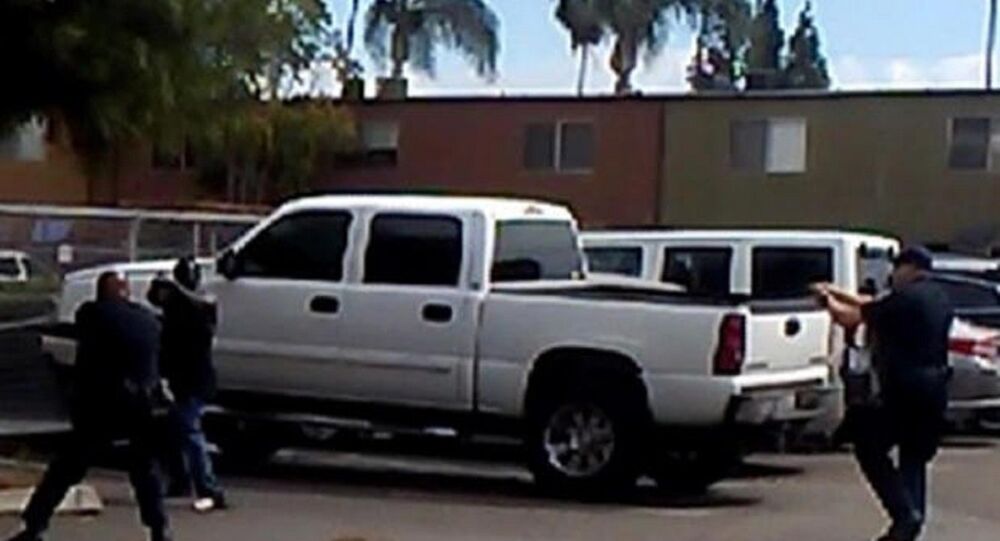 As tensions continue to boil in Southern California over the police killing of an unarmed African-American man in the throes of a mental breakdown, the department has released a video recording of the incident.

Before airing the video at the news conference, Dr. Andre Branch, president of the San Diego chapter of the NAACP, applauded the department for releasing the video in a timely fashion. Reverand Gerald Brown, the Executive Director of the United African American Ministerial Action Council, also spoke before the release, calling for any protests in response to the video to remain peaceful.

The presentation began with surveillance footage from a nearby fast food drive through window. The second video was witness footage taken on a cellphone, from just below the security camera.

No decision has been made on whether or not criminal charges will be filed against the officers involved.

Alfred Olango, 38, a refugee from Uganda, was killed by El Cajon police one minute after they arrived at the scene, responding to calls from the victim’s sister for help with a mental health crisis he was experiencing on Tuesday.

Facebook/Alfred Olango
San Diego Area Cops Say Officer Shot Unarmed Mentally Ill Man Within a Minute of Arriving on the Scene
Police Chief Jeff Davis had stated that Olango “rapidly drew an object from his front pants pockets, placed both hands together on it and extended it rapidly toward [one] officer, taking what appeared to be a shooting stance.” At this point, another officer standing nearby fired a taser at him, while the officer whom Olango confronted with the object fired his gun.

It turned out that the object Olango was holding was a vape pen, but officers released a still frame from a witness video which confirmed that he was holding it in a shooting stance, appearing as if he were holding a gun.

Police Chief Davis claims that footage of the incident backs up the officers’ stories, though none of the officers in the department wear body cameras. Olango’s sister maintains that the officers knew he had psychiatric issues and should have brought the department’s medically-trained crisis team to deescalate the situation.

Olango’s death sparked protests in the city, a suburb of San Diego, as activists demanded that police release the entire video of the incident and for a federal investigation into the shooting.

By Thursday evening, tensions had escalated further, as 50-75 people marched through the streets blocking intersections until bean bag rounds and pepper balls were used by police again. Several fights broke out between protesters and drivers stopped in traffic. Multiple drivers who happened to be in the wrong place at the wrong time had their windows broken, and another man attempting to pass through was thrown from his motorcycle.

Olango moved to the United States in 1991, and had been ordered to be deported twice, after being convicted of selling cocaine and for a federal firearms conviction in Colorado, for which he served four years in prison. He was released from the immigration detention after Uganda refused to take him back.

San Diego has a “co-responder team” of mental-health professionals who can travel with officers and respond to situations involving psychiatric breakdowns. Despite the fact that this program is specifically aimed at helping people like Olango, and after three phone calls detailing the victim’s specific needs, mental health co-responders were not brought to the scene.

The city of El Cajon has advised all local businesses to close early for their own safety, citing concerns that the footage will spark more violent protests.