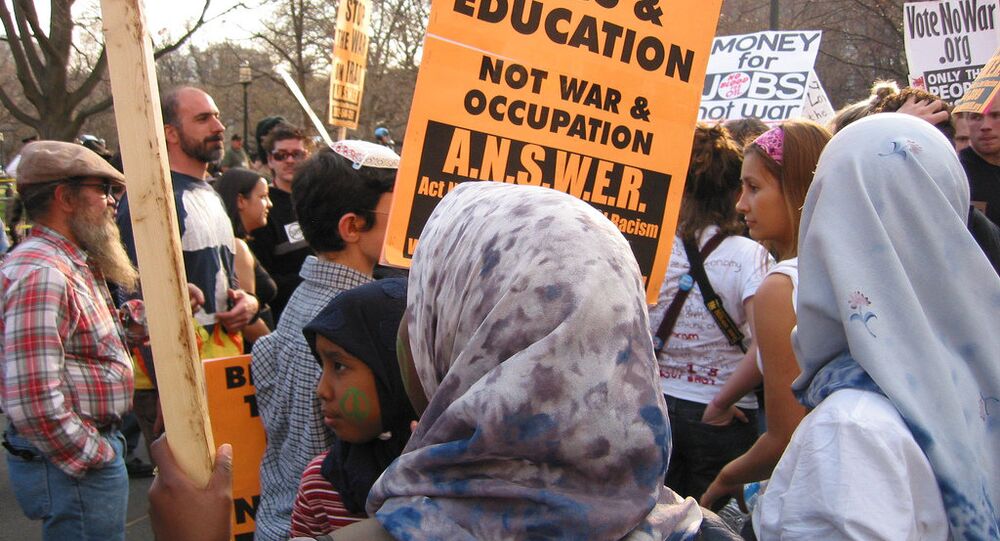 War is so unpopular among the citizens of the United States that the US government must routinely assert that no ground troops are present in ongoing military incursions on foreign soil. Radio Sputnik’s Brian Becker talks to Sarah Sloan of the ANSWER anti-war coalition about how that was not always the case.

© AFP 2021 / ALEXANDER NEMENOV
US Airstrikes on Syrian Army Possible Cover for Daesh Offensive – Syrian Ambassador to Russia
The Bush administration used the 9/11 attacks as an excuse to spark a series of military invasions in a number of Middle Eastern countries, the most notorious of which being the invasion of Iraq, an incursion justified on ‘facts' later proven to be unconnected to the World Trade Center and Pentagon terrorist attacks.

On February 15th, 2003, one month before the invasion of Iraq, a coordinated protest took place worldwide that, according to BBC calculations, included somewhere between six and ten million people in sixty countries. The New York Times called this anti-war movement "the World's second superpower," referring to those around the globe opposed to the militaristic policies of the administration of President George W. Bush.

On September 29th, 2002, just over four months before the global outpouring, only an estimated 5,000 protested plans to invade Iraq. It was the beginning of the modern anti-war movement in the United States.

"It was extremely clear, even in the menacing hours following the events of 9/11, that the Bush administration was going to very cynically manipulate these events and people's feelings, grief, and confusion, to carry out new wars of aggression abroad, new interventions, attacks on civil liberties and civil rights at home," Sloan stated.

© Sputnik / Vladimir Pesnya
'It's Time to Leave NATO Now!' Europeans Launch New Anti-War Campaign
According to Sloan, following the events of 9/11, many advocates for war appeared in the news, agitating people for an invasion of Iraq, preparing the populace by branding the incipient violence as a ‘War on Terror.' The hawkish post-9/11 atmosphere resulted in widespread antiwar expression, including the creation of the "anti-imperialist" ANSWER movement, formed to organize those who seek a peaceful resolution to conflict.

The first steps of ANSWER's anti-war actions, according to Becker, who took part in the group's activities, saw people afraid to protest the upcoming Iraq invasion because they feared persecution by the FBI. Sloan acknowledged that many of those ready to protest against an IMF/WTO meeting backed out out of a fear of domestic oppression.

According to Sloan, as the months passed, more and more people joined the movement, thanks largely to the violent aggression of the Bush/Cheney administration.

"The Bush administration was so aggressive, so open about their desire to carry out endless interventions and occupations around the world, they used those extreme formulations about the ‘endless war,' it sort of took the mask off of the imperialist nature of the US government, so more and more people started to join the movement," she explained.

As millions joined the movement, it became easier to attract a greater percentage of the population, and Bush's popularity plunged, from about 90 percent directly after the 9/11 attacks, to single digits at the end of his presidency.

Presidential administrations are now constrained by anti-war voices, Becker noted, explaining that those voices are the primary reason for the "airstrike only" strategy the US has attempted to uphold in the Middle East in recent times.

After Sending So Many to Die in Iraq, Bush Honors US Vets With Book of Paintings