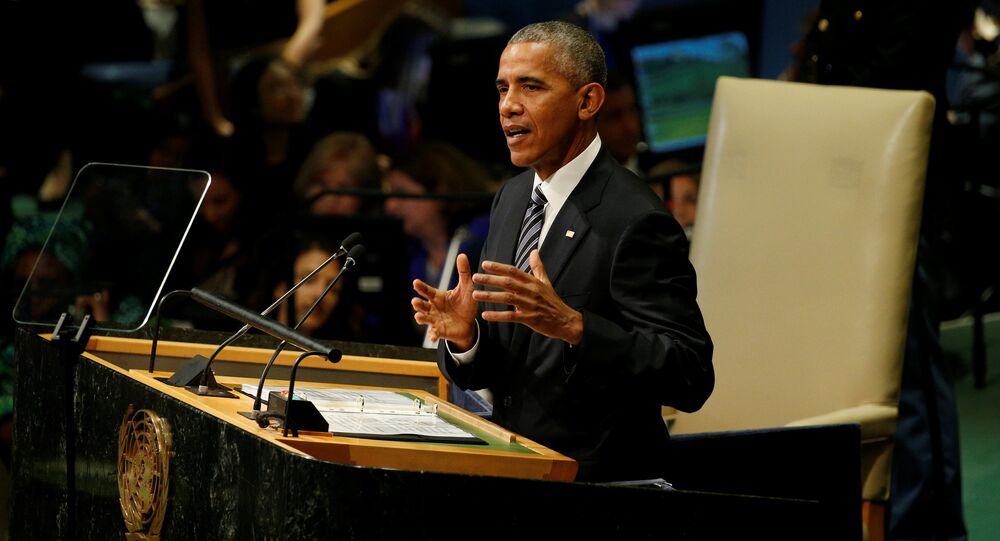 President Barack Obama's final speech before the UN saw just a glimmer of the hope and optimism of his 2008 election campaign. Unfortunately, according to political scientist Oleg Matveychev, Obama ended up becoming one of the most aggressive presidents in recent US history, destabilizing the situation in several regions across the planet.

In his op-ed to the US president's speech, published by Izvestia, Matveychev recalled that as he spoke "from the UN rostrum for the last time as president of the United States, it's likely that Obama thought it important that the international community, and especially the citizens of his own country, would remember him in the manner in which he would like to go down in history."

"He spoke about scientific and technical progress, about world peace, prosperity and the threats posed by certain major powers, meaning Russia, of course. At the same time, his speech was full of peaceloving, blissful well wishes. In many ways, it resembled Obama's early speeches eight years ago, when he first ran for president. At that time, he was seen by Americans as the 'candidate of hope'."

© AP Photo / Andrew Harnik, File
Barack Obama's Last UNGA Address as US President
"Americans," the commentator recalled, "sincerely wanted to find a replacement for George W. Bush, the rough Texas cowboy who solved the world's problems by cracking the whip, while neglecting the carrot. Bush bombed Afghanistan, and invaded Iraq. He shared responsibility for the first Maidan in Ukraine, a conflict with China, and a number of initiatives related to European security which did anything but increase security in Europe."

Obama, on the other hand, "did not strike Americans as a 'cowboy president'…assuming the heavy burden of controlling the whole world. African American voters saw him as a man who would protect minorities and the weak – and who would strive for a new world. His election coincided with a serious economic crisis in Western countries. He responded by speaking of measures to stimulate economic growth, increase productivity, develop innovations and science. But he did not brandish a truncheon."

"In 2009, Obama received the Nobel Peace Prize…'for his extraordinary efforts to strengthen international diplomacy and cooperation between peoples'."

"But what have we actually seen from his presidency?" Matveychev asked. "The troops in Iraq were withdrawn very slowly, and a contingent still remains, since a complete withdrawal would lead to a complete loss of control over the situation in the country."

© REUTERS / Darren Ornitz
Lavrov-Kerry Talks: 'Diplomatic Dancing on Syrian Minefield'
"And it gets worse from there. Barack Obama surpassed his predecessors in organizing so-called 'color revolutions in various countries. It was under his watch that the Middle East and North Africa were swept by the Arab Spring, resulting in a series of regime change scenarios in Egypt, Tunisia, and Libya, ending not just in the massacre of Muammar Gaddafi, but in the murder of the American ambassador who organized the Libyan revolution."

Next, in addition to the second Maidan putsch, organized with the direct assistance of European and American officials, it was during Obama's tenure that the conflict in Syria, "where the US got bogged down, was unleashed."

"Against this background," Matveychev suggested, many people around the world "came to have serious doubts in Obama's role as the 'dove of peace'. In fact, he turned out to be one of the most aggressive American presidents in recent history, managing to destabilize the situation in many regions around the world. And that is how he will be remembered around the world."

The political, social and economic consequences of the color revolutions in the Arab world will take decades to resolve, the analyst noted.

"From the standpoint of international law, interference in the affairs of other countries is unacceptable. We see that Egypt is facing an economic collapse; Tunisia has lost its tourists; Libya has factually ceased to exist, divided into four clan-controlled statelets. Afghanistan and Iraq are also purely nominal territories, controlled by terrorist groups. All this leads to poverty, the mass exodus of these countries' civilian populations, and economic degradation – all things that Vladimir Putin warned about from the rostrum of the UN's session last September when he asked 'Do you realize what you have done?'"

© AFP 2021 / US AIR FORCE
Deir ez-Zor Attack: Pentagon Could Have Something to Hide in Syria
"Apparently not," the political scientist noted. "For example, the US Air Force recently bombed the Syrian Army, saying that it was a mistake. Over 60 people were killed, but no one even bothered to apologize. Washington consciously pursues a policy opposed to Syrian President Bashar al-Assad, supporting terrorist groups including Daesh in the process."

"But Assad is not guilty of any crime before the international community, except that he challenged the US and became a friend to Russia. Washington's logic seems to deem it that the US can support cutthroats – the most inhumane of terrorists; but it is unforgivable when a leader of any state doesn't submit to American will."

"All of this is nothing but double standards and hypocrisy," Matveychev suggested. "That is why Obama's peace-loving speech at the UN General Assembly is a typical example of the behavior of a wolf in sheep's clothing." And ultimately, "for the world community, that's something that is becoming more and more obvious," the commentator concluded.

Obama's Final Message to the UN: 'All Power to the Corporations!'

On Foot, On Time: Lavrov Walks to UN Headquarters Due to Obama's Motorcade