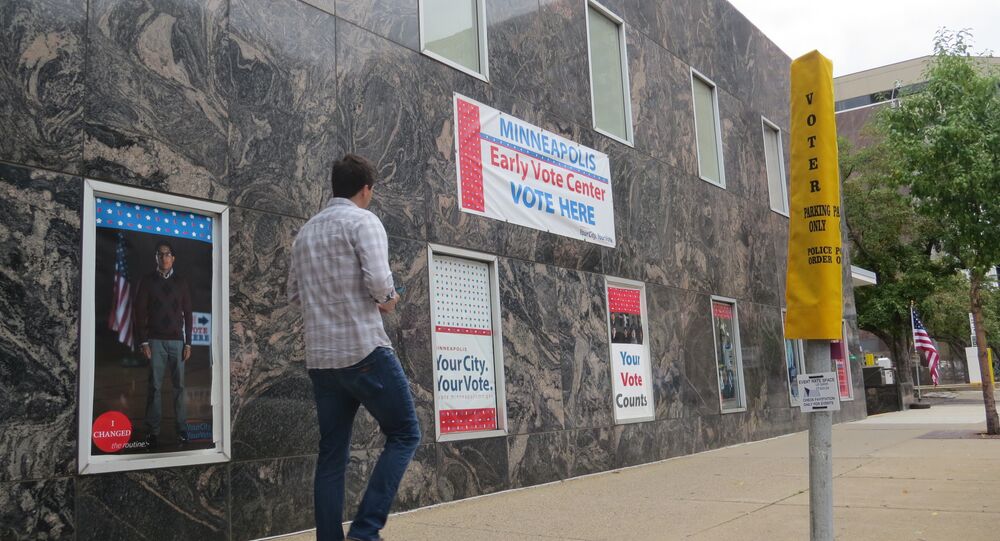 On Friday, just days before Monday’s first presidential debate between the primary candidates, voters in Minnesota began casting their ballots for the next president of the United States.

© REUTERS / Mark Makela
Police the Polls: Getting to the Bottom of America's Election Fraud Problem
A poll worker at the downtown Minneapolis Early Voting office estimated that there were approximately 15 people in line when doors opened at 8:00 a.m. on Friday, and, by 1:00 p.m., roughly 50 people had cast ballots. Nicole Lehrke, supervisor of the downtown site, put her estimate higher, at about 100.

The downtown early-voting office is one of four in the city, and voters have the option of going into one of these stations or casting their ballots by mail. Any voter can choose to file an early absentee ballot for any reason in Minnesota, while some other states require residents to submit a valid excuse.

Those who were not previously registered to vote are permitted to register and vote the same day, either with an identification card or a "voter voucher."

A registered voter, or someone who is registering the same day, can vouch for up to eight other voters who live in the same precinct and do not have identification.

"A voter who is vouched for on Election Day cannot vouch for another voter in the same election," the rules read.

Lehrke explained that those vouching for others must simply sign an oath, a single page form, saying that they personally know the other person or that the person does live in the precinct.

© Sputnik / Cassandra Fairbanks
Voter's can "vouch for" up to eight individuals who do not have identification in Minneapolis.

"We're not allowed to question people once they've signed the oath," Lehrke told Sputnik News when asked how they plan to prevent voter fraud.

Employees of residential facilities may vouch for an unlimited amount of residents who live at their workplace.

"The employee must show the election judge their facility employee ID badge, a statement on facility letterhead signed and dated by a manager or equivalent officer of the facility, or their name must be present on a certified list of employees provided to the facility prior to Election Day," the rules state.

You also do not need an ID if you were previously registered in the same precinct with a former name or address appearing on the roster.

Interestingly, completed ballots will be kept sealed until they are submitted for processing, one week prior to the election. Voters who change their minds about who they are voting for will be able to do so an unlimited number of times until then.

"What happens is, after a person completes their ballot it is placed in a vault," Lehrke explained. Only election judges have access to the vault where the paper ballots are stored. "If they come in and wish to change their vote, the previous ballot is removed from the vault and they are given a new ballot to fill out."

We asked how fraud could be prevented, or if there is independent oversight, and she reiterated that the ballots are kept under lock and key and only election officials have access to them. Previous ballots are reportedly destroyed before the replacement is issued.

Wayne Spar, a Minneapolis resident who registered and voted for Green Party candidate Jill Stein on Friday, acknowledged that abuse of the relaxed identification laws can occur, but believes making it easier for people to vote is ultimately a good thing.

"I could see the flaws in both arguments," he told Sputnik News. "I suppose that for the most part though, an issued ID would prove your residency and that's a positive."

Sarah Reynolds, a St. Paul resident and former Bernie Sanders supporter who has boarded the "Trump Train" since Hillary Clinton's nomination, was planning to vote early, but decided that she did not trust the system to properly process her ballot.

"The reason I hesitate to vote early is that in Minnesota, your paper ballot isn't immediately deposited into a voting box and counted. In fact, state law prohibits it. So then I have to wonder, where is my ballot kept? Who's guarding it? Call me old school, but I want to watch my paper ballot slide into the voting machine as soon as I've cast my vote," Reynolds told Sputnik News. "That is not the case if I drop it off at an early-voting polling place more than seven days prior to the election."

"But you play within the rules that you're given and you compete as hard as you can," he said. "What used to, in the old days, be a 72-hour get-out-the-vote operation is now effectively a 60-day get-out-the-vote program."

Despite the concerns, there are no federal or party officials present for oversight. The election committee is the last word, as there is no other independent entity to track evidence of voting problems.

US Attorney General Loretta Lynch has warned that without independent observers, voter rights are endangered in the upcoming election. The 1965 Voting Rights Act that had placed federal observers in 16 states was overturned in 2013 in the Supreme Court case Shelby County v. Holder.

Speaking on that decision, during a speech to the League of United Latin American Citizens, Lynch said that the Supreme Court “limited the number of observers we can send into the field to watch the election process, to collect evidence, to deter wrongdoing, to defuse tension and to promote compliance.”

For the 2016 election, federal observers can only be sent to five states, marking one of the smallest deployments since the Voting Rights Act was passed.

Federal observers can still be sent to monitor elections, but only when authorized by federal court rulings, Reuters reported in July. Currently, only Alabama, Alaska, California, Louisiana, and New York, courts have done so.

We reached out to the Republican Party of Minnesota for comment, as they have been vocally critical of the early voting system, but did not hear back by the time of publication.

Only 33% US Voters Regard Clinton as 'Honest, Trustworthy'