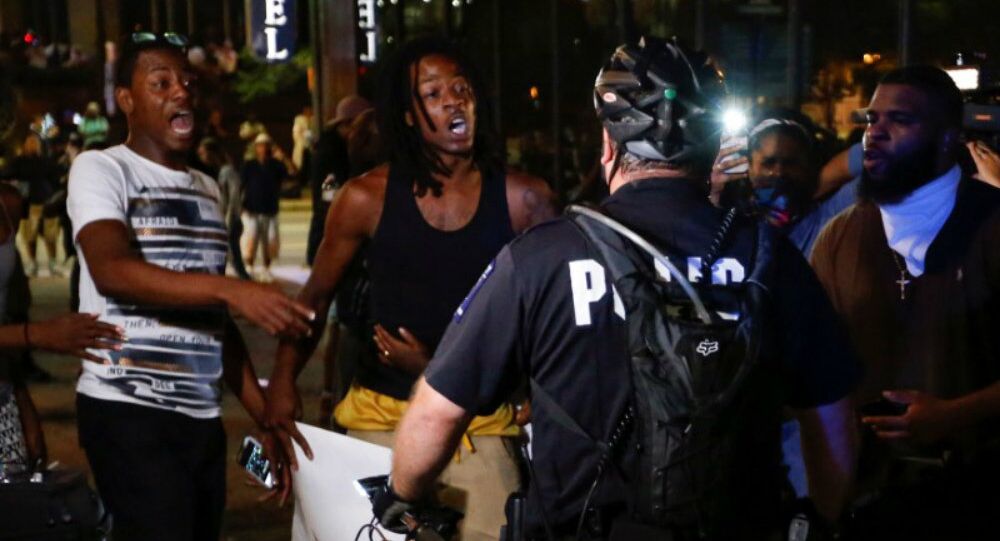 Police and government corruption is endemic in the US, where politicians should work to tackle human rights abuses at home rather than lecturing other countries, Civil rights activist Toni Sanders, founder of the group Think MOOR (Movements of Organized Revolutionaries), told Radio Sputnik.

On Tuesday afternoon a 43-year-old black man, Keith Lamont Scott, was shot dead by police in Charlotte, North Carolina. The shooting sparked protests from the local community, who dispute the police version of events.

The local police claim that Scott was armed and "posed an imminent deadly threat to officers" who shot him.

However, Scott's family insist he was unarmed and reading a book in his car at the time of the shooting.

On Tuesday and Wednesday residents of Charlotte took to the streets in protest at Scott's death, and North Carolina Governor Pat McCrory declared a state of emergency and ordered the deployment of the National Guard and highway patrols after the protests turned violent.

One protestor is in critical condition in hospital after being shot, and 12 police officers were injured after protests on Wednesday.

Civil rights activist Toni Sanders, founder of the group Think MOOR (Movements of Organized Revolutionaries), told Radio Sputnik that the quick deployment of the National Guard is another sign of disparity in the treatment of African-Americans.

"Look how quick they declared a state of emergency in North Carolina and brought the National Guard in. We had (Hurricane) Katrina, which was a major natural disaster over in Louisiana and all those people were stranded on rooftops, thousands of people died, it took eight days for the National Guard to even do anything," Sanders said.

© REUTERS / Adam Rhew/Charlotte Magazine
Twelve Officers Injured in Protests Over Fatal Shooting in North Carolina
Sanders said that the protests are a response to the shooting and inadequate police investigations into previous police shootings of unarmed black men.

Sanders made a radical proposal for black people to tackle police brutality against them. This includes setting up new educational, economic and security institutions to rival those of the US government.

© REUTERS / Mike Stone
Steroids May Be Behind Aggressive Behavior of US Police
"One of the things I advocate for, honestly, is for black people to get their own schools, start growing gardens and feeding their own communities. To stop depending on the economic structure of the US, because we need to withdraw our funds and keep our money in our communities."

"We mean community policing, that is what is going to empower us and keep us safe. The government is corrupt. The government here in the US is trash, and they tell these other countries, 'you're violating human rights, we need to invade your country,' and right here in their own territory they are violating the human rights of black people every single day," Sanders said.