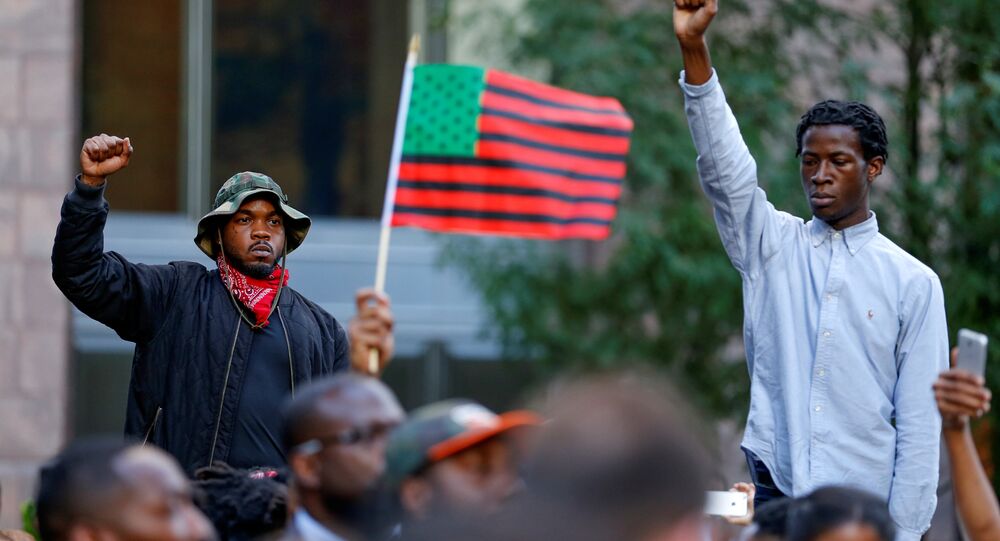 US soldiers engaged in combat in Iraq and Afghanistan and fighting on the front line have rules of engagement they must follow from their commanding officer before they go as far as firing a shot to kill someone.

War veterans have often confirmed the steps they must follow and exhaust before shooting anyone — even if there is car suspected of carrying explosives.

This includes hand signals, flags, smoke warnings and flares. Only then would they be authorized to fire disabling shots — and only after that — would they be allowed to fire what's called a "kill shot."

​It seems that despite the militarization of the US police force, serving officers remain worlds apart from following similar protocols after yet another murder of an innocent black man by an American police officer in Charotte, North Carolina.

It is for this reason, that so many American — both black and white — are questioning why police officers in the US do not hold fire before they shoot?

The Mayor of Charlotte, Jennifer Roberts, acknowledged that there had been peaceful protests in a statement made Thursday, September 22:

"The safety and the security of our community and law enforcement remains our top priority. Our city remains open, its business as usual."

Our top priority is for Clt to remain a safe community for everyone who lives and visits here.

​Colin Kaepernick, an American quarterback in the National Football League decided to kneel during the national anthem, in order to speak out against police brutality and inequality.

Kaepernick faced harsh criticism, and since, at least 16 more black men have been killed by US police. But are his critics right to brand this protest as shallow?

Since @Kaepernick7 attempted to raise awareness about police reform in America, police have killed 67 people. In 22 days. #TerenceCrutcher

"I don't think it's a shallow protest at all. Everybody has a responsibility to do something. There's going to be a spectrum of what you can do. In relation to Kaepernick's protest itself, on the one hand, he has to feed his family and do his job, but there is that balance. Black people are being killed on a regular basis in the US. I don't think there's necessarily a link between this protest and those people. What he's doing is raising awareness," Alexis Alexander, one of the leaders and activists of the Black Lives Matter movement in the UK told Sputnik.

Kaepernick's protest, the cities of Baltimore and Ferguson have all stood strong in their fight against brutality, but what progress has actually being made?

"It's a blanket change that needs to happen, there needs to be a shift in policy, attitudes, generally the stereotypes. Until there is a shift in the minds of police officers and law enforcement. Nothing will progress," Ms. Alexander said.

"The most recent people that have been killed are Keith Scott [on Tuesday, September 20 in Charlotte, North Carolina] and and Terence Crutcher [on Friday, September 16 in Tulsa, Oklahoma]. In both instances, the police officers in question have been put on paid administrative leave.

"I don't understand how you can kill someone and be put on paid leave. That needs to stop," Ms. Alexander told Sputnik.

"In the interim, people are hurt and there's no understanding of what is happening. How can we take out a mass murderer who is white and stop off at Burger King, but a 13-year-old is not safe on the streets?"

#TerenceCrutcher (& many other unarmed POC) were not only executed but were provided ZERO first aid. #DylanRoof was brought Burger King.

This was echoed by Colin Kaepernick, who said that his protest was bigger than football: "There are bodies in the street and people getting paid leave and getting away with murder."

Lessons Learned or Not?

"No we are not learning anything, it doesn't feel like any lessons are being learnt. Lessons learned should lead to progression, some kind of difference in reality. I also don't see any change from an American perspective," Ms. Alexander said.

She believes that policy needs to change, but first we must start to look at the state of black people emotionally and address these issues.

"All of this is down to systemic institutional racism. We have a police system that would like to appear diverse and culturally understanding, but all you have to do is look at the difference in treatment on a day to day basis.

"Just the other day, I was unfortunately in a road traffic accident [in the UK], it was me, an Asian male and black male who were involved. As soon as the police saw the black male they went straight to him and he didn't even cause the accident," Ms. Alexander told Sputnik.

"With the Asian male they asked him, 'Are you okay?' But when it was the black male, their whole demeanor changed, that is the issue with the police, it is their attitude, and the assumption is there. I work with young black boys who tell me about 'stop and search.' We are not saying, don't stop and search, but it's the way you treat people."