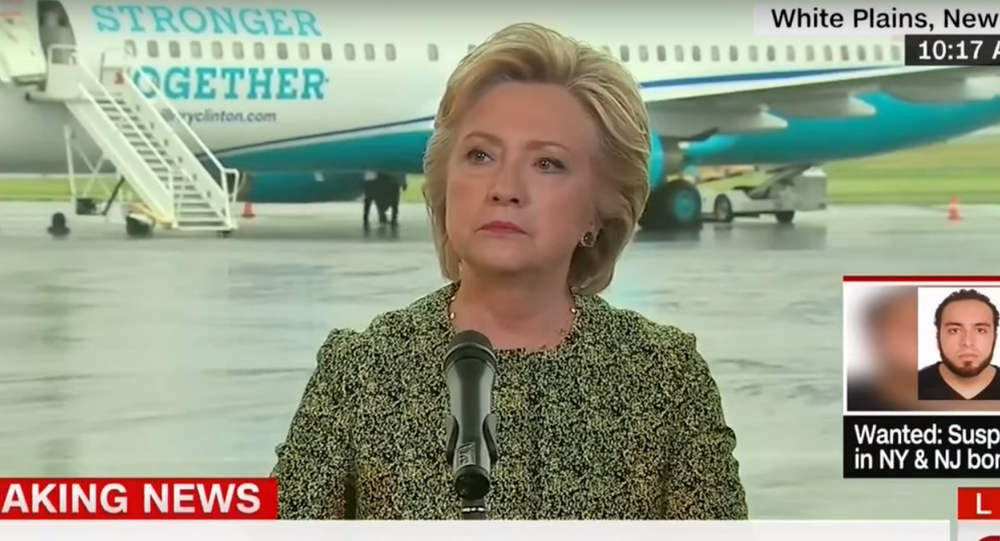 October Surprise: Did This US Reporter Suggest Russia Was Behind NYC Bombings?

Given the Democratic Party’s repeated attempts to paint Russia as a provocateur in the upcoming US election, it should come as no surprise that the mainstream media would suspect the Kremlin of involvement in the New York and New Jersey bombings. Clinton’s refusal to dismiss the absurd idea, however, may be a new low.

On Saturday evening, an explosion rocked Chelsea in downtown Manhattan, injuring 29 people. Earlier in the day, a smaller blast took place in New Jersey. The primary suspect, Ahmad Khan Rahami, has been arrested and faces fives charges of attempted murder, two gun charges, as well as federal charges of use of weapons of mass destruction and bombing a place of public use.

But prior to Rahami’s arrest, Bloomberg reporter Jennifer Epstein speculated wildly as to who was behind the attack.

"Are you concerned that this weekend’s attacks or potential incidents in the coming weeks might be an attempt by ISIS or ISIS sympathizers, or really any other group, maybe the Russians, to influence the presidential race in some way, and presumably drive votes to Donald Trump, who is, as you’ve said before, widely seen as perhaps being somebody who they would be more willing to – or see as an easier person to be against?" she asked Democratic presidential hopeful Hillary Clinton on Monday.

This isn’t the first time that the mainstream American media has made baseless accusations about a Russian role in shaping the upcoming US elections. Hacks into the Democratic National Committee have been attributed to the Kremlin without any evidence, and multiple efforts have been made to link Republican candidate Donald Trump with Russian President Vladimir Putin.

Last month, the Washington Post warned of a potential “October surprise,” claiming that Moscow may release doctored intelligence in an effort to smear Clinton.

"Perhaps they’ll show that the Clinton Foundation has been funding the Islamic State, or they’ll have Hillary Clinton admitting that she didn’t care about those Americans who died in Benghazi after all," reads the op-ed by Dana Milbank.

Rather than outright refute Epstein’s absurd insinuation that Russia was behind the bombing, Clinton danced around the subject.

"I don’t want to speculate," she said, before shifting into a discussion on defeating Daesh.

The Washington Post, New York Times, CNN, Wired, and dozens of other outlets have pushed the narrative, launched by the Clinton campaign, that Russia has attempted to influence the US presidential election and that it favors the Republican candidate.