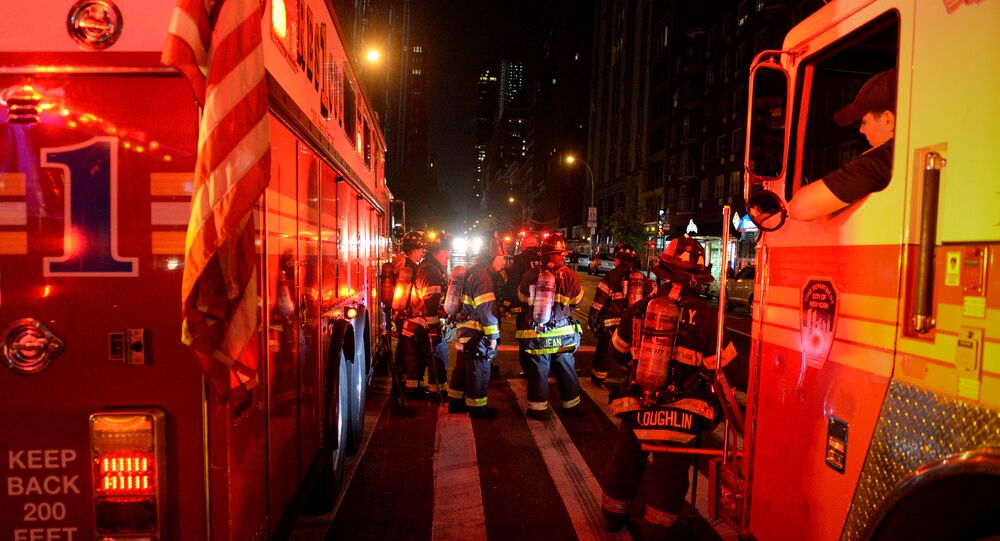 A large explosion rocked a busy New York City neighborhood, leaving 29 people injured in what Mayor Bill de Blasio, the NYPD and the local Fire Department described as "an intentional act" that was ostensibly not related to terrorism. Another suspicious device was recovered four blocks away from the scene.

"Tonight New York City experienced a very serious incident," de Blasio said at a news conference near the scene in Chelsea. "I want to say more broadly, there is no specific and credible threat against New York City at this point in time from any terror organization."

Mayor @BilldeBlasio on the scene and about to update public re: earlier explosion tonight on 23rd and 6th. pic.twitter.com/XWL7kYpNh5

​Location of the blast

At approximately 8:30 p.m. (00:40 GMT) an improvised explosive device (IED) went off in front of 131 West 23rd Street in Chelsea, a neighborhood in New York City. Various reports have said that the explosion took place at 133 W 23rd Street or 135 W 23rd Street.
The explosion is said to have taken place in a dumpster.

Traffic alert regarding the explosion in Chelsea, Manhattan pic.twitter.com/IiqpPjWz1t

​NYPD officers from the 10th Precinct saw the incident while on routine patrol.

The site of the blast is being treated as a crime scene. The investigation into the incident is ongoing.

Cause of the blast

NYPD Police Commissioner James P. O'Neill said that the exact cause and the nature of the explosion have not been determined.

© REUTERS / Rashid Umar Abbasi
New York City Blast Captured on Video
​Investigators ruled out a gas leak as the cause of the incident. The NYPD described the incident as "an intentional act" not linked to an earlier incident in New Jersey that saw a pipe bomb explode in the beach town of Seaside Park.

The NYPD Bomb Squad and the FBI Joint Terrorism Task Force were requested at the scene, fueling concerns that officials have not ruled our terrorism as a possible cause of the blast. Mayor de Blasio said that there was "no evidence at this point of a terror connection."

Investigators found a second device that appeared to be a pressure cooker attached to wiring and a cellphone wrapped in a plastic bag on West 27th Street. It has been taken to a firing range in the Bronx.

UPDATE: The suspicious device on West 27 Street in Chelsea has been safely removed by the NYPD Bomb Squad.

​In addition, local police are said to have found a third explosive device two blocks away from 23rd street.

The explosion left 29 people injured, the NYPD reported. Twenty-four people were taken to the hospital with minor injuries, including scrapes and bruises. However, one person received a puncture wound that was considered serious.

As of now there are 29 injuries, one considered serious.

Republican presidential nominee Donald Trump was one of the first to comment on the explosion in Chelsea. "I must tell you that just before I got off the plane a bomb went off in New York and nobody knows what's going on," he said at approximately 9:10 p.m.

Democratic hopeful Hillary Clinton said that the US needs to support its first responders and "pray for the victims," adding that "we have to let this investigation unfold."