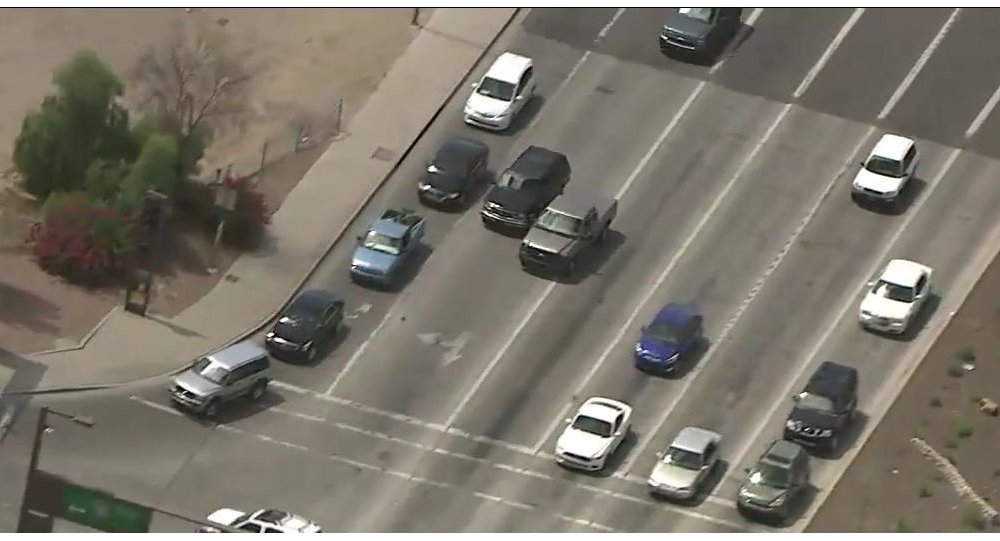 A bank robbery suspect has been shot dead after a long car chase in Phoenix, Arizona, and the operation was broadcast live.

Police officers in Phoenix engaged in the chase after responding to an armed robbery at a credit union on Tuesday. Police chased three suspects in a black SUV fleeing the crime scene. Two suspects left the car and fled on foot, while the driver traveled 30 miles across Phoenix, throwing evidence out of the window.

The pursuit lasted more 50 minutes, and was broadcast live from a FOX affiliate helicopter.

"Once again, folks this is live, so, a reminder, some of the images here may not be suitable for all audiences. This is a live stream right here, anything could possibly happen," the reporter commented.

Police successfully blocked the SUV on the road. An officer came out of a cruiser brandishing a combat rifle, and fired several shots at the driver through the windshield. It is not known whether police made an attempt to call for the driver's surrender.

"Oh, oh wow," exclaimed a broadcaster, moments before the station cut the feed.

According to Sgt. Jonathan Howard, Phoenix Police Department representative, the driver shot at police during the chase.

The two other suspects are in police custody, according to media reports. One was tracked by dogs, with a help of the Maricopa County Sheriff's Office canine unit.

This incident marks the 19th officer-involved shooting in Phoenix in 2016. Eleven of those shootings were fatal.