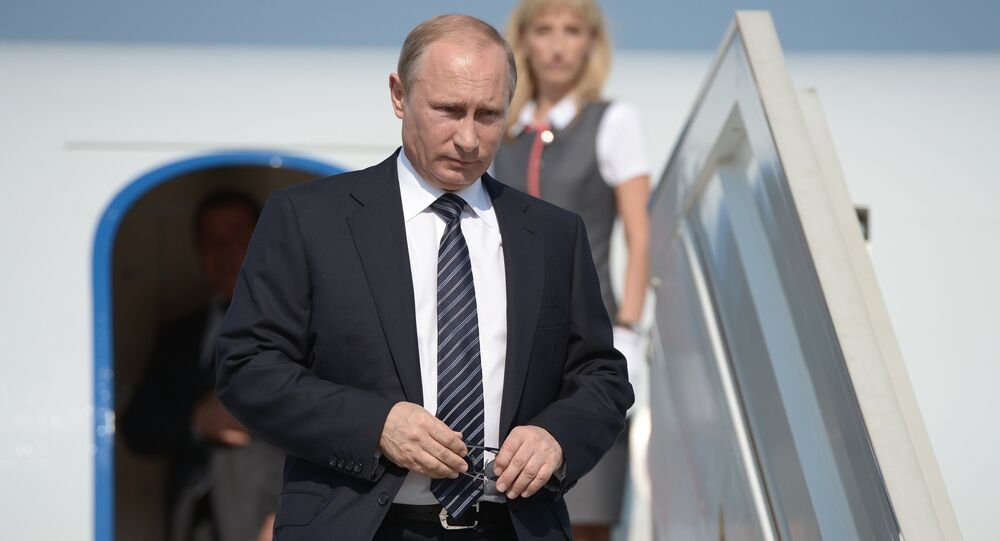 In yet another instance of what has become an all-too-common attempt to blame a Russian boogeyman for political failings in the United States, the Washington Post has published a dire op-ed warning of an ‘October surprise’ from the Kremlin.

When WikiLeaks released internal emails from the Democratic National Committee (DNC) earlier this year, the US media’s first response was to blame the leak on Russian hackers — instead of focusing on the content of the documents, which revealed that the DNC actively worked to ensure that former US Secretary of State Hillary Clinton was victorious over Vermont Senator Bernie Sanders.

© REUTERS / Jonathan Ernst
Obama: US May Impose Penalties on DNC Hacker, Too Early to Pin Blame on Russia

There is no evidence to show that the Russian government was involved in any way, but of course, when a hack occurs in the United States, officials are quick to blame Moscow. These false accusations are then parroted by the media, even when senior US intelligence officials and cybersecurity experts dispute the claims.

"We don’t know enough to ascribe motivation, regardless of who it might have been," US National Intelligence Director James Clapper cautioned last month.

On Monday, Dana Milbank published an op-ed with the Washington Post, entitled "A Putin-sponsored October surprise?" The piece suggests that the Kremlin could release doctored intelligence in an effort to smear Clinton, ahead of the presidential election in November.

"Perhaps they’ll show that the Clinton Foundation has been funding the Islamic State, or they’ll have Hillary Clinton admitting that she didn’t care about those Americans who died in Benghazi after all," the op-ed reads.

"Maybe they’ll show that she really did lose most of her brain function in that fall several years ago and is now relying on Anthony Weiner to make all of her decisions."

The article provides no evidence to back its accusations, and appears to rest solely on a Foreign Policy article that claims hackers leaked altered documents in an effort to besmirch George Soros’s Open Society Foundation. This article, too, provides zero evidence that the Russian government was behind the hack.

Milbank also cites questionable FBI claims that a Russian hacking group recently infiltrated voter databases in two US states. But this interpretation is also up for grabs, given the fact that the information contained in those databases is largely available to the public online. This information includes voter names, phone numbers, addresses, and party affiliations — information that is generally less useful than a phone book to any state actor.

"Even if you assume that Putin’s intelligence services were responsible, and their motive was for Donald Trump to win, why pick the State of Arizona?" Jeffrey Carr wrote for Medium. "They’ve voted for a Republican for President in every Presidential election since 1952 except for 1996."

"In an apparent effort to boost Donald Trump’s presidential candidacy, they’re leaking what they believe to be the most damaging documents at strategic points in the campaign," he writes.

In this election cycle, the Russian government has become a useful scapegoat for mainstream media outlets in backing their preferred candidate: Democrat Hillary Clinton.

The Washington Post, New York Times, CNN, Wired, and dozens of other outlets have pushed the Russian hacking narrative. Several of these outlets, including the Post and Times, have openly endorsed Clinton.

On Sunday, the New York Times printed a story entitled "A Powerful Russian Weapon: The Spread of False Stories," which accused RT and Sputnik of being part of a Kremlin disinformation campaign. While the piece begins by focusing on Sweden’s possible NATO involvement, it shifts inexplicably to the US election.

"[RT’s] coverage of the Democratic National Convention, for example, skipped the speeches and focused instead on scattered demonstrations," the article reads. "It defends the Republican presidential nominee, Donald J. Trump, as an underdog maligned by the established news media."

Even a cursory look at either RT or Sputnik, however, reveals a highly balanced coverage of the Republican presidential dark-horse candidate, including those that cast him in a negative light.

Earlier this month, Michael McFaul, a former US ambassador to Russia and current Clinton surrogate, wrote an op-ed for the Post that boldly claimed "Russian President Vladimir Putin wants to see Donald Trump become the next president of the United States." The accusations in McFaul’s piece have been debunked at length.

Instead of accusing Moscow of attempting to influence an American election, maybe the US media should look in the mirror.