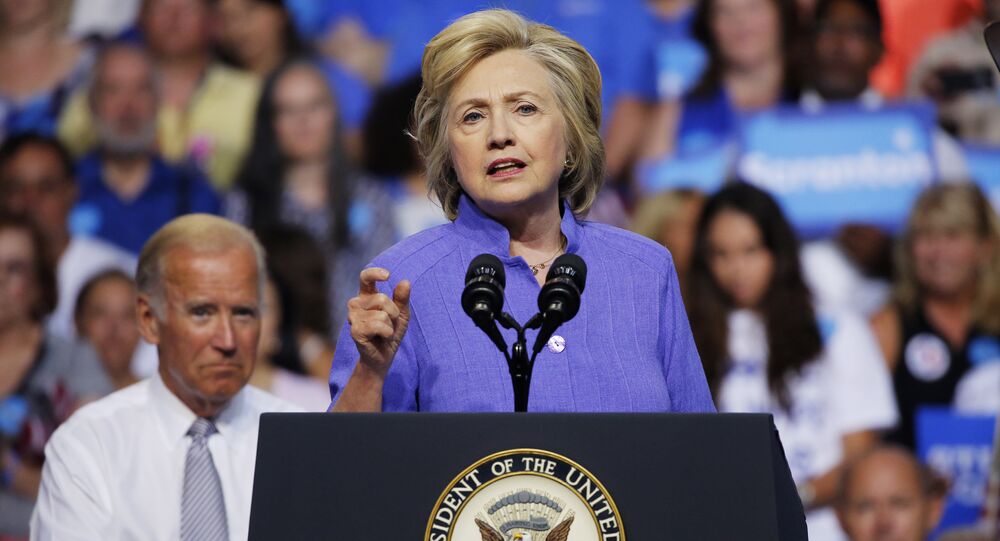 What Does Clinton Have to Gain by Driving a Wedge Between Trump and Republicans?

US Democratic presidential candidate Hillary Clinton has virtually separated Republicans from Donald Trump supporters by coining the term “alt-right.” Why would she do that, and how does her campaign benefit from using the label?

Sam Sacks and Sam Knight, of Radio Sputnik's Unanimous Dissent, talk about candidate Clinton's recent speeches, in which she implied that Donald Trump is a "unique racist Republican" within the GOP.

"Clinton did Republicans a huge favor by distinguishing them from the Trump wing of the party," said Sacks, "which she called the ‘alt-right,' instead of painting all Republican lawmakers as part of the Trump wing. She's essentially giving the down-ballot Republicans cover to tell voters who were repulsed by Trump: ‘Hey, I'm not like that guy Trump, I'm a responsible Republican, I'm one of those good Republicans Hillary was talking about in her speech, not one of the racist Republicans.'"

It makes sense, offered Knight, as it has been widely reported that the Clinton campaign is actively fundraising Republican voters. But, he suggests, it could come at the price of having less Democrats present in the Senate in November. The best way for Clinton to give Democrats in the Senate as much power as possible would be by painting all of the Republicans as Trump supporters, he opined.

The Democratic National Committee (DNC) has reportedly pleaded with Clinton to not take this strategy, Sacks said. He notes that DC-news website The Hill reported that some of the emails from a recent DNC hack make much more sense after Clinton praised Republicans, including John McCain (R-AZ) and former President George W. Bush, as being "good" Republicans.

One of those emails comes from DNC's former communications director Luis Miranda, saying that Clinton's Republican-friendly strategy is a problem for the DNC.

The email states, "we would basically have to throw out our entire frame that the GOP made Trump through years of divisive and ugly politics. We would have to say that Republicans are reasonable and that the good ones will shun Trump. It just doesn't work from the Party side."

Miranda added in the same email that the "strategy would ALSO put us at odds… basically all of our Congressional Democrats who have embraced our talking points… that GOPers in Congress have been pushing these ugly policies for years."

Clinton's recent policy seems strange, remarked Sacks, noting that a major part of her primary speeches detailed how she was going to help take back the house in the Senate for the Democrats.

Sacks and Knight question why Clinton would make that shift, considering that Republicans, to whom she is offering support, will not necessarily support her policies in return.

Considering how Trump's campaign actively attacks Clinton in constantly recalling her "superpredator" remarks in the 1990s or her 2008 campaign, which was dubbed an example of "dog whistle racism," these latest developments suggest that Clinton's campaign is run by "people who aren't very good at strategy, who aren't very good at their jobs, who can't see what's in front of them in the political environment," according to Sacks.

Sacks notes a rather disturbing story detailing how many smaller businesses were ruined by Trump, and that the story has all-but-disappeared from the media, after a shift to covering Clinton's remarks about Trump's ties to the Kremlin.

If Clinton is going to blame Bernie Sanders for not helping to get more votes for Democrats after elections in November, she will be pointed to the leaked DNC emails and asked the same question, Sacks suggested.