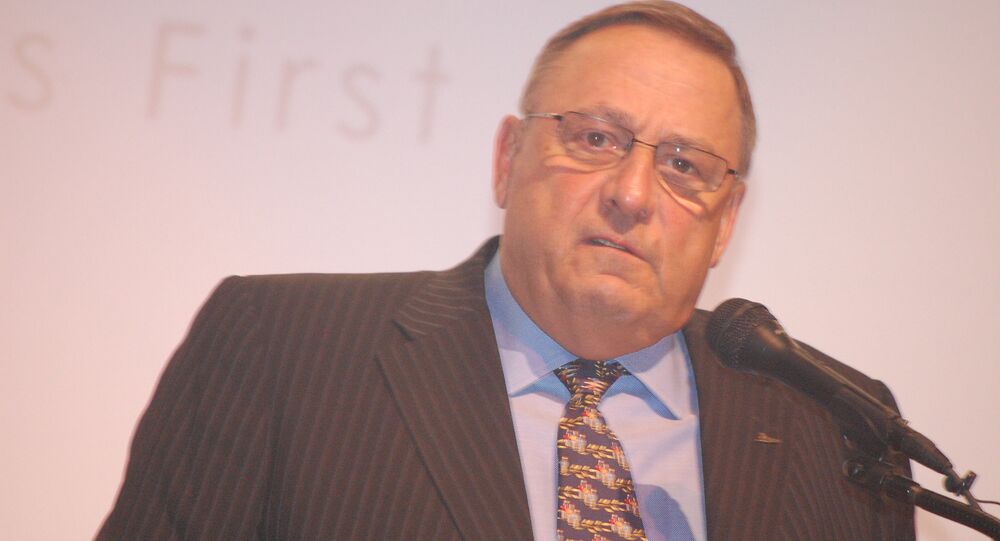 An abusively-worded voicemail recording of Maine’s controversial and explosive Republican governor, Paul LePage, has been made public, in which he calls a political rival a “socialist c**cksucker” and challenges him to a duel.

Twitter/Robert Morrow
Texas County Republican Chair Who Called Trump a Child Rapist Loses Job
The vulgar and homophobic message was intended for Democratic Representative Drew Gattine, in response to a reporter allegedly telling LePage that Gattine had called him a racist.

“Mr. Gattine, this is Gov. Paul Richard LePage,” the governor can be heard saying, in a recording of the message obtained by the Portland Press-Herald. “I would like to talk to you about your comments about my being a racist, you c**cksucker. I want to talk to you. I want you to prove that I’m a racist. I’ve spent my life helping black people and you little son-of-a-bitch, socialist c**cksucker. You … I need you to, just friggin. I want you to record this and make it public because I am after you. Thank you.”

LePage then invited reporters to hear him double-down on his over-the-top remarks.

“When a snot-nosed little guy from Westbrook calls me a racist, now I’d like him to come up here because, tell you right now, I wish it were 1825,” LePage said. “And we would have a duel, that’s how angry I am, and I would not put my gun in the air, I guarantee you, I would not be [Alexander] Hamilton. I would point it right between his eyes, because he is a snot-nosed little runt and he has not done a damn thing since he’s been in this legislature to help move the state forward.”

The threatening message was crass and obscene enough to inspire state Democrats, including assistant House Democratic Leader Sara Gideon, to call for his resignation.

YouTube/CBC News
Video Showing Toronto Mayor Ford Smoking Crack Finally Released by the Courts
Gattine, for his part, has remained above the mudslinging, referring to the Governor’s remarks as “upsetting.”

“It’s hard to believe it’s from the governor of the state of Maine, but again, we need to stay focused on the drug problem we are facing here in Maine and cannot allow this story to be about the governor’s inappropriate and vulgar behaviors,” Gattine told the Press-Herald.

Gattine is the chair of the State Legislature’s Health and Human Services Committee, and has opposed several of LePage’s proposals relating to welfare and drug enforcement.

On Friday, LePage apologized for his offensive language — in a manner of speaking.

"I apologize for that to the people of Maine, but I make no apology for trying to end the drug epidemic that is ravaging our state. Legislators like Gattine would rather be politically correct than work with me to stop this crisis that is killing five Mainers a week,” LePage said in a statement.

LePage stirred controversy recently for his comments that the vast majority of drug offenders in Maine are black or hispanic and from out of the state.

Sports Stars Speak Out Against Homophobia Ahead of Russian Olympics