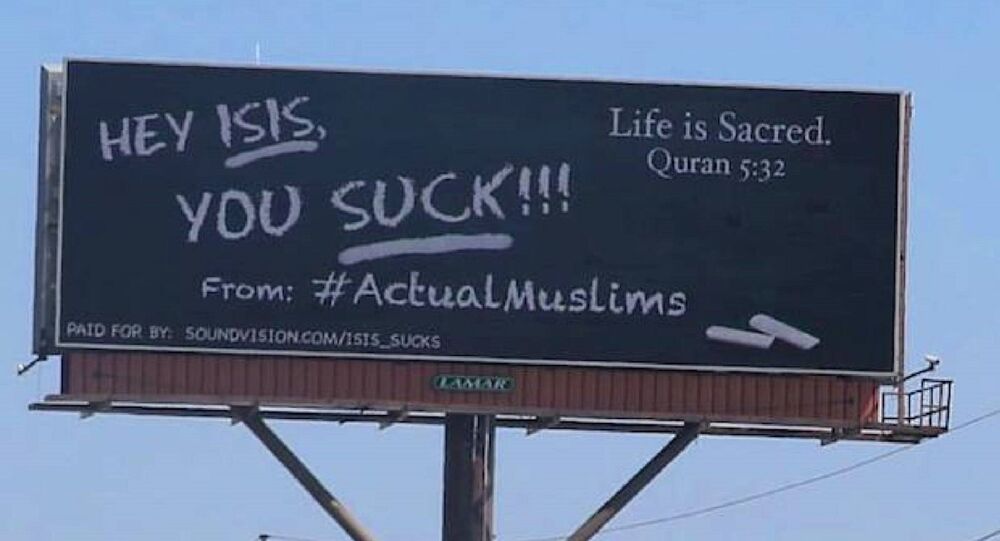 ‘ISIS, You Suck!’: Muslim Group Behind Billboards Popping Up in Major US Cities

© Flickr / syauqee mohamad
New York Police Refuse to File Report after Muslim Girl Punched, Called ‘ISIS’ at School
The two billboards are meant to look like chalkboards and begin with a reference from the Quran 5:32, in the form of a simple quote: “Life is sacred.”

The organization paying for the billboards, the Sound Vision Foundation, first placed one in their home-base city of Chicago on a highway heading to the famously busy O’Hare Airport. This week a second billboard went up in downtown Phoenix.

“Prophet Muhammad, God’s peace and blessings be upon him, is described in the Quran as a Mercy to all of the worlds. He came to establish peace, justice, law, and order,” the Sound Vision Foundation’s website states. “ISIS is diametrically opposed to everything he taught and expected his followers to adhere to.”

Run by young Muslim-American professionals, the group has received requests from cities around the world to also place billboard ads. The group has offered to negotiate with billboard companies, to provide designs and assist with media relations for groups or individuals who raise money to have a billboard placed in their area.

"Muslim communities from 15 cities have approached us with sponsorships and donations to put up the billboard in their communities," Siddiqi continued, adding that they have already started the negotiation process to have the billboards installed in those cities.