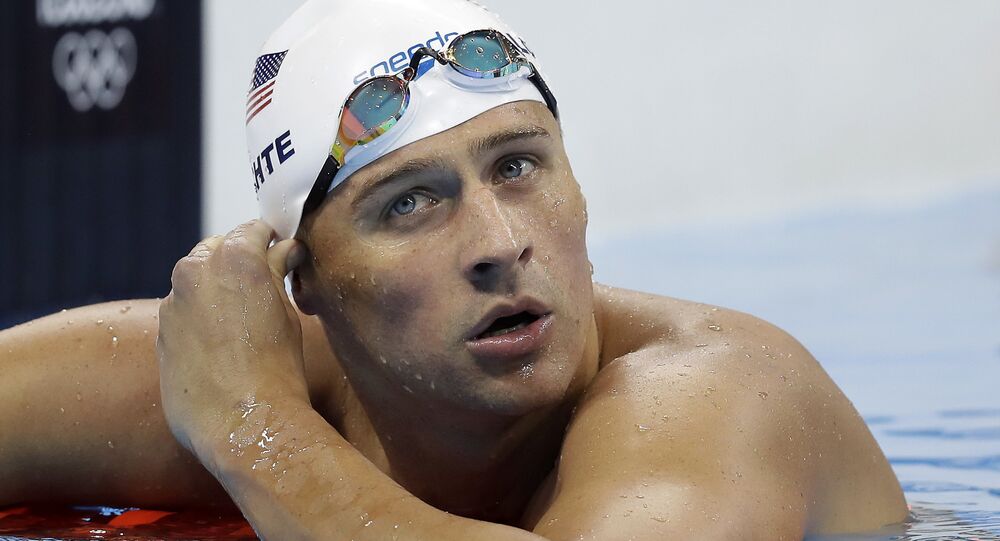 As decorated Olympic swimmer Ryan Lochte’s story about being robbed at gunpoint continued to fall apart on Thursday, three of his teammates were pulled from their US-bound flights to face questioning by Brazilian authorities, telling police that the fabrication was Lochte’s idea.

© Flickr / JD Lasica
Not Adding Up: Did US Olympic Medalist Ryan Lochte Lie About Gunpoint Robbery in Rio?
Lochte, 32, reported that he and three other swimmers were held up by robbers posing as police on their way to a party early Sunday morning. Brazilian police recommended on Thursday that he and fellow swimmer James Feigen be indicted on charges of falsely reporting a crime, Brazilian police confirmed.

On Thursday, Rio police held a media conference stating that the swimmers were absolutely not robbed, but Lochte claims he did not lie and that three minutes are missing from the released surveillance footage. He claims the missing minutes would show the moment he and the others were removed from the cab at gunpoint.

On Wednesday, a judge prohibited Lochte and Feigen from leaving the country, after officials noted discrepancies in their stories, but Lochte had already returned to the US.

Brazilian authorities have maintained that the story did not add up and, on Thursday, it was reported that Jack Conger and Gunnar Bentz confessed to police that the story had been fabricated.

Speaking on condition of anonymity, one police official told the Associated Press that the group of swimmers — Lochte, Conger, Bentz and Feigen — stopped at a gas station in Barra da Tijuca around 6:00 AM. One of the swimmers had attempted to open the door to an outside bathroom, but failed. The group of the swimmers then broke the door down and were confronted by an armed security guard

The police official stated that while the guard had a pistol, he did not remove it from its holster, or point it at the men. Soon after, the gas station manager asked the swimmers to pay for the door they broke, which they did.

Brazilian news outlets reported that Lochte and his teammates vandalized and urinated on the gas station.

The incident was partially captured by a surveillance camera.

Brazilian authorities previously stated that Lochte reported being robbed by one person, while Feigen claimed there were multiple robbers. Surveillance footage showed the swimmers returning to Olympic Village in good spirits, and not acting in a manner consistent with people who had just been robbed at gunpoint.

On Thursday, T.J. Holmes of ABC News reported that police officials told him that the swimmers were too drunk to give statements immediately following their claims.

© Sputnik / Alexey Filippov
Why Rio Olympics Could 'Do Brazil More Harm Than Good'
In Brazil, many are outraged over that Lochte lied, as Rio has received large amounts of bad publicity for reports of crime and violence, which residents believe is unfair.

“Rio de Janeiro asks Mr. Lochte to not come back to the city,” Corporal Anderson Valentim of the Rio Military Police told the Washington Post. “People with bad characters are not welcome.”

In an unrelated incident, British Olympic officials have confirmed that one of their athletes was robbed in the city on Tuesday. They have not yet identified the athelete, but have stated that the person is safe.

“We can confirm there has been an incident of theft involving a Team GB athlete returning to their accommodation,” a British Olympic team spokesman said in a statement. “All members of our delegation, including the individual concerned, are accounted for, and are safe and well.”

CORRECTION: An earlier version of this story indicated Lochte and Feigen had been indicted by Brazilian authorities. Police have recommended that they be charged, but prosecutors have yet to determine whether charges will be filed.