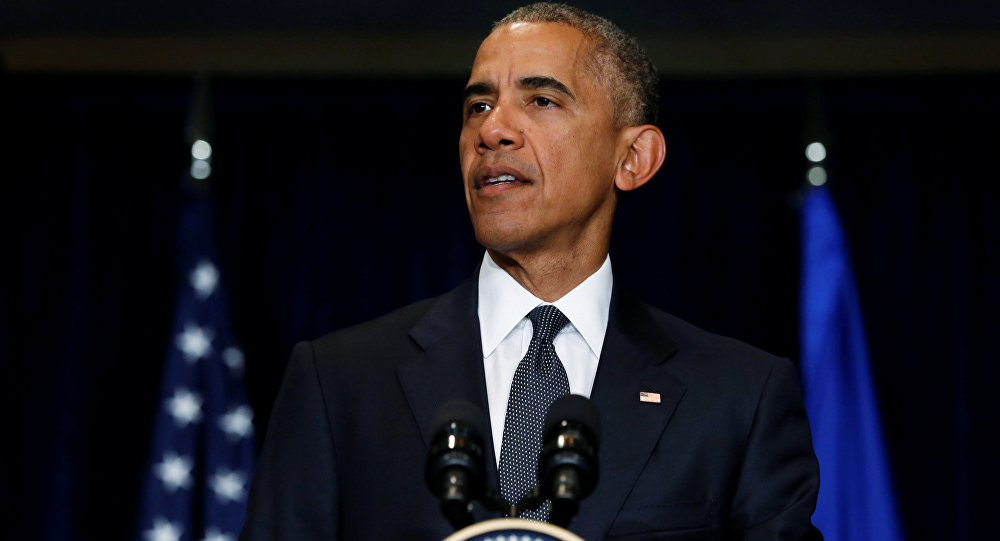 Obama said at the Democratic National Convention that Hillary Clinton is determined to smash barriers of prejudice and increase opportunity for all to ensure the future of the United States.

© AP Photo / Evan Vucci
DNC Emails Deal Major Blow to Clinton With US Public
WASHINGTON (Sputnik), Martin Sieff – Democratic presidential candidate Hillary Clinton is determined to smash barriers of prejudice and increase opportunity for all to ensure the future of the United States, US President Barack Obama told a supportive crowd at the Democratic National Convention (DNC) in Philadelphia.

"There is only one candidate in this race who believes in that future, and has devoted her life to it… a leader with real plans to break down barriers, blast through glass ceilings, and widen the circle of opportunity to every single American – the next President of the United States, Hillary Clinton," Obama said on Wednesday night.

Obama spoke for 50 minutes in his last appearance before a Democratic convention as president. He began behind schedule at 10:55 pm missing the prime time period for the main US East Coast population centers. After he finished, Hillary Clinton came onstage and embraced him in an unexpected appearance.

Obama claimed he had learned that Clinton was a tough leader when he contested her a year and a half for the US presidential nomination in 2007-2008.

"Let me tell you, it was tough, because Hillary’s tough. Every time I thought I might have that race won, Hillary just came back stronger for the president… She never, ever quits," the US president said.

However, although Obama presented his own record of achievements as president as best he could, he admitted that he had fallen short in many areas and gave no details about what Clinton’s domestic, economic and foreign policies would be in any specific terms.

Protests Against Clinton, US Democratic Party Continue for 4th Day at DNC

US Voters Doubt Hillary Clinton to Bring Change to Washington