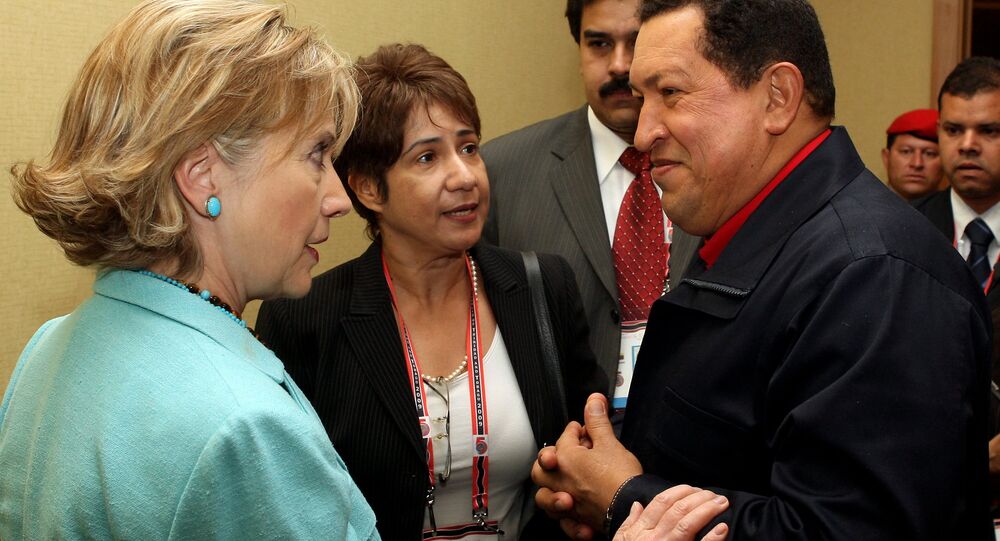 Despite her public appeals for friendship, a series of leaked emails show that during her time as Secretary of State, Hilary Clinton, has continued to promote subversion against the Latin American country behind closed doors.

The emails, leaked by WikiLeaks, show that during her tenure as US Secretary of State, Hilary Clinton asked the then-assistant Secretary of State for Western Hemisphere Affairs, Arturo Valenzuela, how "to rein in Chavez." Valenzuela alluded to reaching out to other regional partners to help undermine Chavez:

"We need to carefully consider the consequences of publicly confronting him but ought to look at opportunities for others in the region to help."

​The leaked emails confirm a continuing trend of US covert intervention toward Venezuela and perceived leftist governments throughout Latin America generally, such as Cuba and Ecuador. WikiLeaks also exposed a 2006 US embassy strategy toward the then democratically elected President Chavez, saying that "creative US outreach to Chavez's regional partners will drive a wedge between him and them."

© CC BY 2.0 / Wikileaks Mobile Information Collection Unit / Wikileaks Truck
Wikileaks Publishes Around 20,000 US Democratic National Committee Emails
Why exactly Clinton and the US government more generally take such an approach toward Venezuela is the subject of such speculation.

However Dr Francisco Dominguez of the Venezuela Solidarity Campaign told Sputnik that:

While Clinton has expressed friendship toward Venezuela in public, this trove of leaked emails suggests a different intention toward the Latin American nation, something which Dr Dominguez expresses reservations about:

"Because the US has to take into account the regional feelings of the people, it pretends that it likes or favors good relations, but it will never stop destabilizing Latin America, or Venezuela."

​Clinton also expressed concern at a United Nations decision to condemn the military coup in Honduras in 2009, which Clinton supported. In 2009, democratically elected Honduran President Manuel Zelaya was toppled by the military backed by opposition parties. Despite the fact that the US' traditional allies — like the EU — condemned the coup, Clinton has confessed that at the time, she wanted to see a new government replace the leftist Zelaya administration, and, "restore order."

It's 2 bad we don't have ppl of Haiti, Honduras & Libya telling their stories abt Hillary Clinton & her criminal role as SoS #DemsInPhilly

​The Venezuelan government was among regional actors that condemned the coup and subsequent crackdown on leftist activity. At the time, Clinton pejoratively asked why the UN was so concerned with Honduras, and not Venezuela: "Ok — but have they ever condemned Venezuela for denying press freedom?" she wrote to an official.

One of the leaked emails also recommends not spending any USAID funds on well-known leftist states like Venezuela, Cuba, or Nicaragua because such funds could "undermine real democratic development."

It also says that "any funds channeled to unreliable states" alluding to Venezuela, "must be accompanied by "human behavioural changes."

DNC has been digging for evidence of USAID corruption on Trump while Clinton & State Dept have been withholding hers pic.twitter.com/OMtRyPmePM

​The Broadcasting Board of Governors (BBG), the US government-run organization behind Voice of America and various pro-American international radio stations has also been revealed as asking Clinton to provide more funding in order to "combat the public diplomacy efforts of America's enemies." The chairman of the board, Walter Isaacson, explicitly identifies these states as "Iran, Venezuela, Russia, and China."

Subsequently, the BBG's annual budget has been increased to around US$750 million, and has called for ramping up of activities in the aforementioned countries. Clinton responded to this in an emailing by saying: "Let the fun begin."

Any government/media watchdog do an analysis of ideas pushed by our foreign-language propaganda machine? BBG has a $750,000,000 budget.

​Dr Dominguez believes that the United States' ultimate objective is to see the overthrow of the Venezuelan government, currently led by former Chavez aid Nicolas Maduro, who enjoys popular support.

"The American government has hit the private sector in particular food distribution, holding back food which forces people to que up. By forcing them to que up people become discontent, the result is that people become very unhappy, particularly the poor. The idea, I think, is to undermine the base of support that the Chavez-Maduro government enjoys, and if they're able to undermine them, they think they will create the conditions to overthrow the government which is what they did in Chile in 1973," Dr Dominguez told Sputnik.

​Since the early 1970s, the United States government has pursued various subversive policies in Latin America, aimed at undermining the democratically elected, and usually leftist, governments of the region.

This began in 1973 with the military coup against Chilean Prime Minister Salvador Alande and the imposition of General Augusto Pinochet. In 2001 and 2002, the US government ramped up funding for the Venezuelan opposition groups in an effort to create a viable opposition to President Hugo Chavez.

Such policies continue to the present day, and if Hilary Clinton becomes President, they are likely to remain unabated.