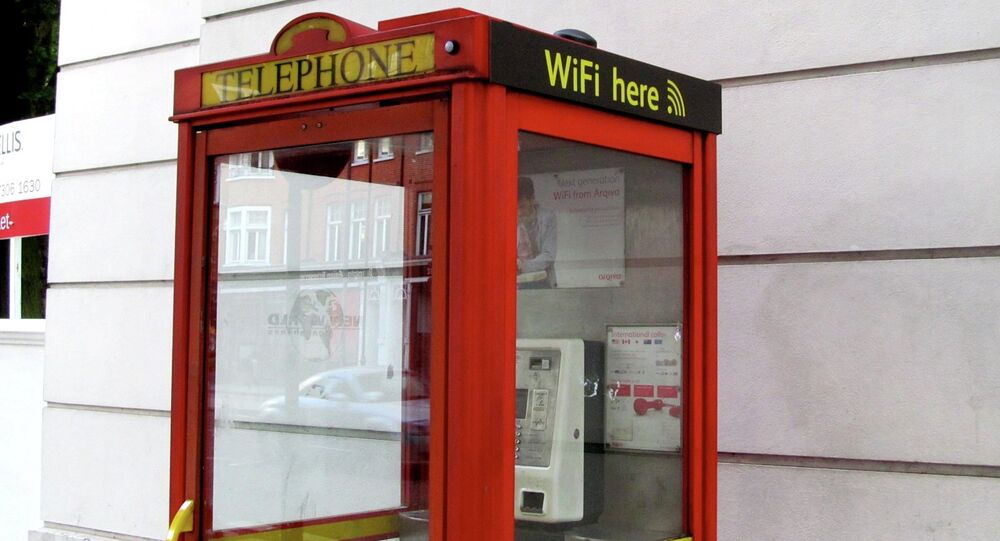 No Cell Phone or Wi-Fi in This US Town

There is a secluded place, off the beaten path but hardly a tourist destination, where people live in a technological vacuum, where cell phones are prohibited, Wi-Fi is not available and car radios scan the broadcast spectrum and get only hiss. If your first guess is North Korea, you are wrong.

© AP Photo / Carolyn Kaster
This Is What the US Government Uses to Spy on Your Cell Phone
Green Bank, population 145, in the great state of West Virginia is, on first glance, an ordinary small town in the Appalachian Mountains. Until, that is, you stick around.

A special place, Green Bank is located in the National Radio Quiet Zone, a 13-thousand-square mile area where radio transmission is banned. The zone was established to avoid electromagnetic interference from a nearby adjustable radio telescope, the largest in the world, that towers over the countryside.

The Robert C. Byrd Green Bank Telescope (GBT) is 500 feet tall and has a dish big enough to fit a football field inside, and still have room for bleachers. According to Jay Lockman of the National Radio Astronomy Observatory, the telescope is used to study a variety of things, including looking for life in outer space.

As most signals from outer space have traditionally been very faint, life around the telescope must remain as quiet as possible. That explains why people in the town can't even use some of today's most common conveniences.

NASA
Space Aliens, Killer Robots Helped NASA Produce the Mars Rover
The operation of the GBT requires that microwave ovens nearby are placed in protective steel boxes. And when a large retail outlet opened nearby, the automatic doors had to be changed because they were interfering with reception.

When it comes to Wi-Fi and cell phone technology, people passing through can forget about it. Residents say that when passersby come to town they are often aggravated because cell service is nonexistent.

Locals, however, are quite happy with the way things are. Some people have moved to Green Bank because there they can enjoy the sounds of nature. At times it's so quiet you can hear your thoughts, it's said.

"It's when we all played outside, and you didn't sit on the computer all the time," said Sherry Chestnut at Trent's General Store. "I would not change this place for anything."

The only inconvenience the residents admit to is being unable to immediately call for help in emergency situations.

"Emergency-wise it would be nice to have [a cell phone]," said Debbie Birely, who also works at Trent's. "But for peacefulness, we don't need 'em."

But don't worry, at Trent's they'll let you use their landline if you're passing through. Or you can use the payphone, one of the last in the state, if not the entire country. You can use it to call the main office of the GBT, and ask if they've heard from ET.

The Truth Is Out There... In a Welsh Hotel Visited by Long-Legged Aliens

Kickstarter Raises $100,000 to Investigate a Star for Aliens