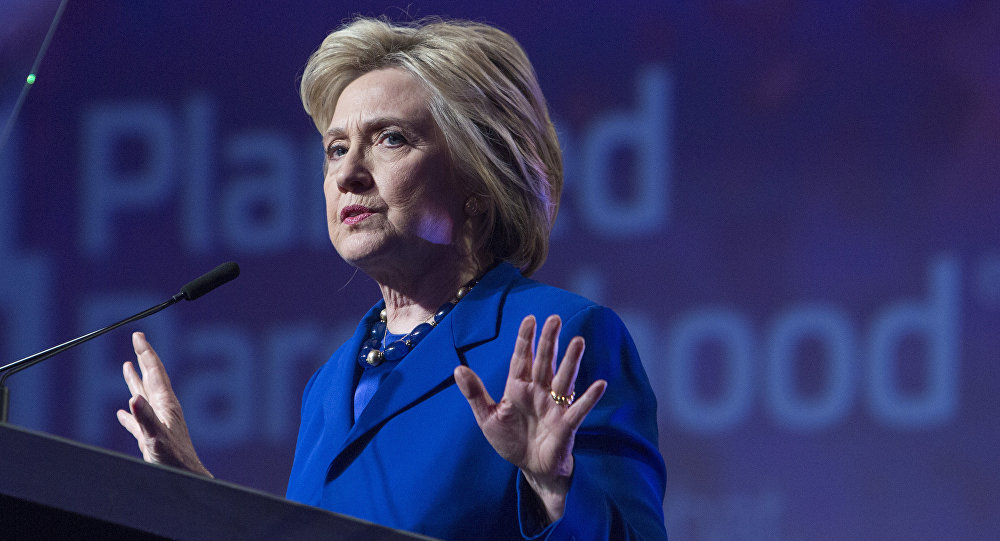 Daniel McAdams, executive director of the Ron Paul Institute for Peace and Prosperity, told Radio Sputnik that allegations that Moscow could be behind the DNC email scandal is just a “spit in the wind” in a deteriorating public relations disaster.

McAdams told Radio Sputnik that it was long suspected that Schultz was pointedly "for Hillary Clinton," but seeing the evidence in black and white is an "absolute bombshell," especially as it has occurred just prior to a Democratic National Convention set to start later on Monday that will see the nomination of Clinton as the party's presidential candidate.

"It's the last thing the Democrats want on the eve of their convention's opening, to have this huge blow-up to happen," McAdams said.

© REUTERS / David Becker/Nancy Wiechec
Race to the White House: Trump Wipes Out Clinton’s Lead
As for Sanders' chances to be the nominee after all, McAdams agreed that "anything is possible," but noted that democratic voters are "disciplined people." The Vermont Senator himself is no exception, McAdams said, as he endorsed his rival earlier in July.

"What happened with Sanders; he endorsed Clinton, even though he ran a campaign against Wall Street. He endorsed the Wall Street candidate," McAdams said. "The question is, the ball now is in Bernie's court. And more importantly, what is Hillary Clinton going to do?"

According to McAdams, the current disarray in the DNC is serving as a wakeup call to those who still believe that voting can change the status quo.

"It's outrageous as it is. Partly because we have the evidence right in front of us…Hopefully people will wake up to the idea that these two parties are just a couple of crooked operations."

Ahead of the Democratic convention, hundreds of Sanders supporters rallied in Philadelphia, calling on Clinton to withdraw from the race. According to McAdams, the recent revelations will trigger second thoughts among many voters. "The Democrats will have to do something quick to get Bernie's voters on board," he said, given Trump's surging popularity in the polls.

"It could be very dramatic in these last couple of days of the convention," he suggested.

McAdams also dismissed allegations that Moscow could be involved in the DNC leaks.

"Robby Mook, Clinton's campaign manager…was on CNN yesterday, trying to make the assertion. Of course he didn't make it himself. He didn't have the courage to stand up and make it. He said that some experts have said that Moscow was behind it. Well, which experts and what evidence did they have?" McAdams asked.

"I certainly saw a lot of things from neocon advisers yesterday, who make a profession out of attacking Russia, and trying to ruin US relations with Russia. Which reminds me a lot of stories of the Russian ‘invasion' of Ukraine. Where is it? Let's see the photos? So there's nothing there."

McAdams called the accusations a "desperation move" and a "propaganda ploy" aimed at making Westerners think that, absurdly, Russia is fixing the US election.