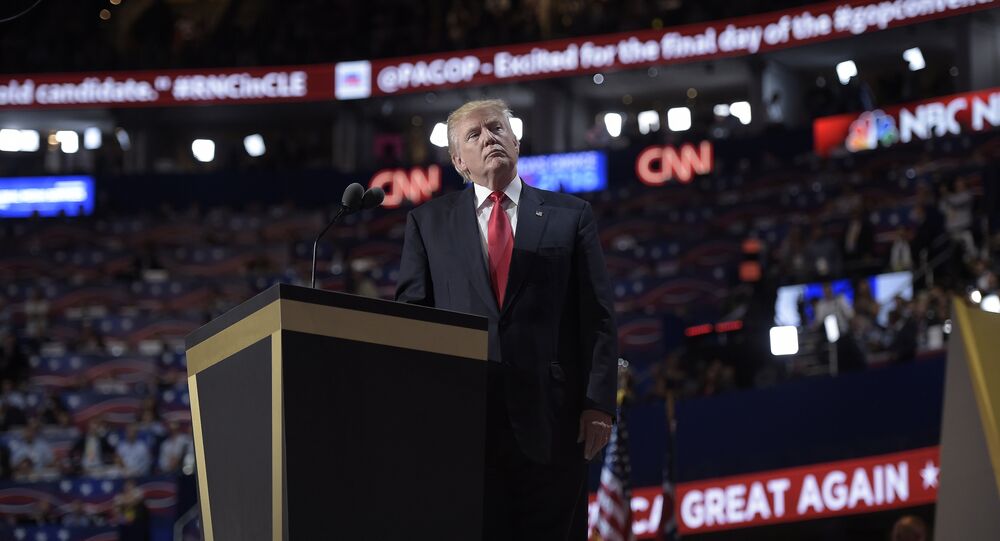 Republican Convention delegates from across the United States expressed their hope that the promises and policies Donald Trump addressed in his nomination speech are fulfilled.

CLEVELAND (Sputnik) — In an hour-long nomination speech, Trump addressed major US domestic and foreign policy, emphasizing law and order, job creation, curbing immigration, and national defense. The Thursday speech was the first major policy discussion in the course of the four-day convention.

"There was a real shift in focus from the beginning of the week, when it was all about tearing down [likely Democratic nominee Hillary] Clinton, to tonight where it’s all about building up what Trump is planning to do for America," a Republican from Washington, DC told Sputnik after Trump’s major Thursday address.

A number of delegates, though enthusiastic Trump won the party’s nomination, were cautious about his ability to deliver on all of his promised.

. "…@realDonaldTrump has been the people's champion. Tonight, he's the people's nominee." — @IvankaTrump pic.twitter.com/NTxFwK0050

​"I heard him say ‘I will, I will’ a lot," a delegate from Oklahoma commented. "I want to see him perform. And I hope he can."

Ultimately, each delegate indicated their hope that the Republican Party will emerge from the convention more united behind the party’s non-traditional choice of candidate.

© AFP 2021 / Michael B. Thomas
Neocons Make Trump Sound Like Peacenik on Foreign Policy
One member of the Pennsylvania delegation described Trump’s address saying that "it wasn’t a Republican speech, it was an American speech."

A delegate from West Virginia was impressed with Trump’s focus on working class Americans and the energy sector. He said he was most struck "when Trump referred to the miners we need to put back to work," noting the coal miners who lost their jobs in West Virginia, Pennsylvania, and Ohio due to President Barack Obama’s energy regulations.

​"Four years ago we were saying one man one woman defines marriage. This is the first time in a Republican speech they said LGBTQ," a Utah delegate explained. "They’re talking about all of America."

So proud of my father. 🇺🇸 #RNC #RNCinCLE #2016Cle pic.twitter.com/XQyWNVxPKj

​On Thursday night Trump formally accepted his party’s nomination and will campaign for the next four months against Hillary Clinton.

​The US general election takes place on Tuesday, November 8.