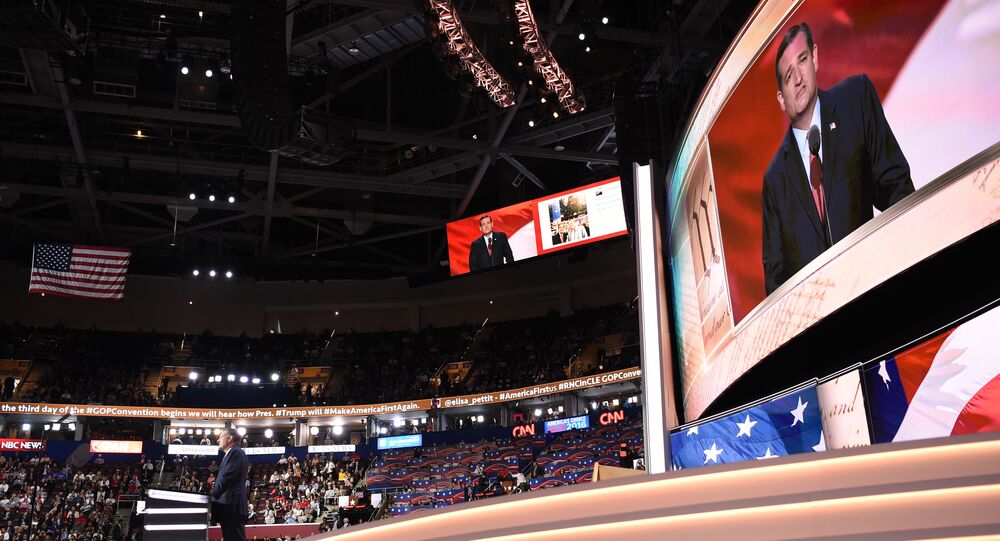 Republican Senator Ted Cruz was booed by the audience at the GOP National Convention after he failed to endorse Republican nominee Donald Trump during his speech.

CLEVELAND (Sputnik) — Ted Cruz has failed to endorse Donald Trump as the GOP nominee for US president, although he did congratulate the billionaire at the Republican Convention in Cleveland.

"Vote your conscience," Cruz said in a Wednesday speech, a statement falling short of an official endorsement. "Vote for candidates up and down the ticket who you trust to defend our freedom and to be faithful to the Constitution."

At the beginning of his 15-minute speech, Cruz was met with resounding applause from delegates. By the end, after he failed to officially give his support to Trump, the audience booed him as he left the stage.

Heidi Cruz, the Senator's wife, was reportedly escorted out by security as the Cleveland crowd got angry over her husband's speech.

Cruz won the second highest number of delegates during the primary elections, but fell far short of defeating Trump.

During the primary season, Trump and Cruz exchanged ferocious insults. Trump famously insulting his opponent’s wife and insinuated that Cruz’s father Rafael had a hand in the assassination of President John F. Kennedy.

"I want to congratulate Donald Trump on winning the nomination last night. And like each of you, I want to see the principles that our party believes prevail in November," Cruz said.

He urged American voters to go to the polling stations and not to stay home in November.

Cruz also supported Trump’s idea that a wall should be built on the US border with Mexico in order to control immigration.

"We deserve an immigration system that puts America first. And yes, builds a wall to keep us safe," Cruz said.

Trump Makes Surprise Appearance on Day One of Republican Convention