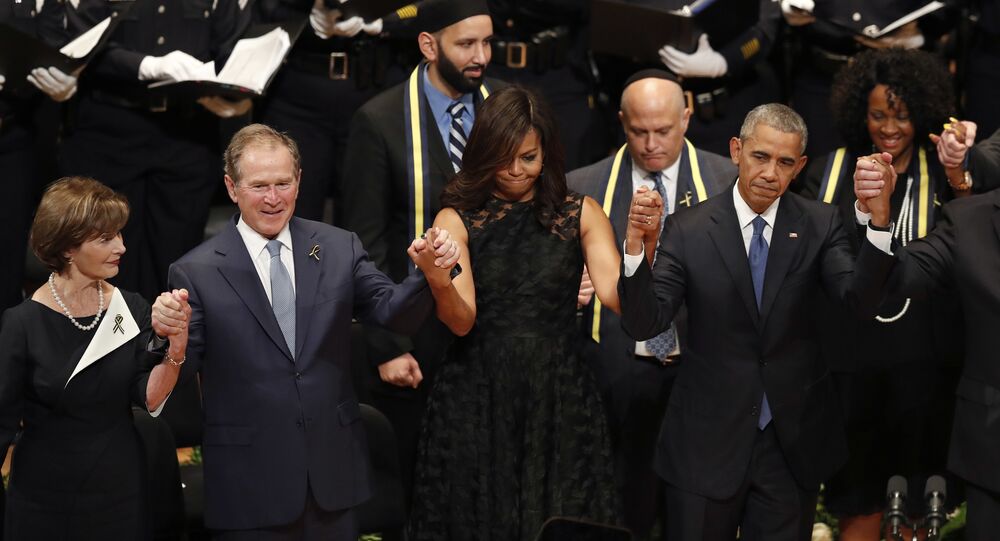 Former President of the United States George W. Bush managed to raise quite a few eyebrows in the US and across the world when he started dancing at a memorial service for the Dallas police officers killed by snipers during a protest on July 7.

During the ceremony, the ex-president was seen smiling and even dancing while holding the hands of his wife Laura and First Lady Michelle Obama as the choir performed "Battle Hymn of the Republic."

This unexpected and somewhat bizarre display startled many social media users, who were quick to express their bewilderment.

I think George Bush showed great restraint by not marching in place while dancing to the Battle Hymn of the Republic.

Some users also pointed out how Michelle Obama and Laura Bush reacted to the former president’s antics.

George Bush smiling and dancing during the singing at the #DallasMemorial ? I wonder how hard Laura was squeezing his hand to stop

Five Dallas policemen were shot dead during a Black Lives Matter protest march in the city that took place on July 7 following the death of two black men who were killed by law enforcement officers in separate incidents in Louisiana and Minnesota.

The Aftermath and Implications of the Dallas Shootings