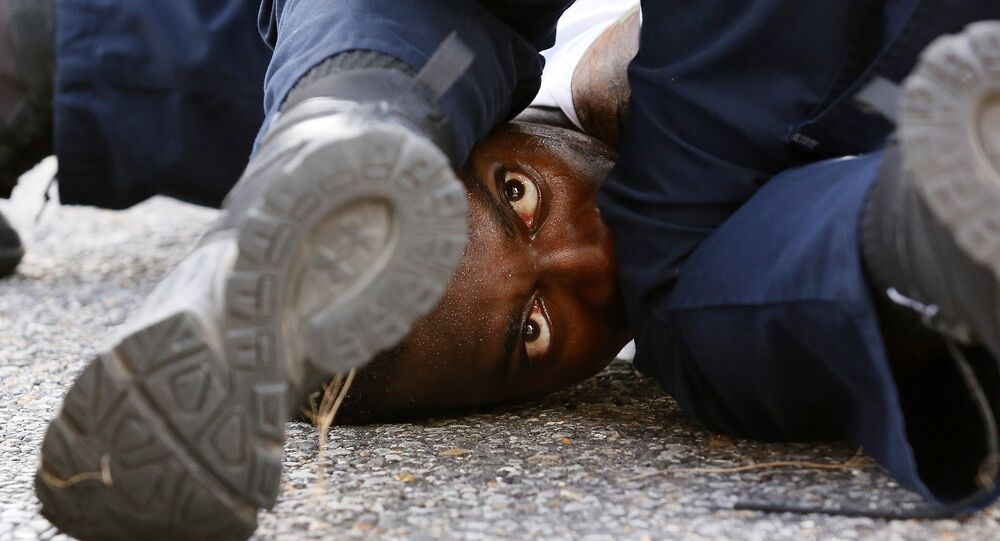 The FBI ignited a powder keg in Baton Rouge by issuing warnings to police about an unsubstantiated plot to “kill all police” which led law enforcement to victimize and arrest non-violent Black Lives Matter protesters.

Social media erupted this morning with #FreeDeray after news broke that the Black Lives Matter founder who travelled to Baton Rouge as a voice of peace and reason monitoring protests against the senseless killings of local resident Alton Sterling and a Minnesota man Philando Castile at the hands of trigger happy cops despite both men failing to present a threat to police.

The tragic deaths immediately sparked a new wave of outrage and protests across the country led prominently by the Black Lives Matter movement that has looked to curb abuses of power by local police forces that lead all too often to the premature death of law-abiding black residents under horrific, caught on camera moments.

Just as the public began to digest the horror of Alton Sterling’s death, shot at point blank range in the chest several times as two officers forcibly held him down, the world was met face to face only hours later with the image of an unarmed Philando Castile bleeding out on a Facebook livestream as his girlfriend narrated in a state of shock and fear.

The situation unraveled further with Thursday’s attack at a Black Lives Matter protest in Dallas that left five officers dead and nearly a dozen others wounded when a lone gunmen decided to take matters into his own hands to avenge the deaths of unarmed black men at the hands of police throughout the country.

While Dallas once again received the news on Saturday with a false alarm report of a man in a gas mask preparing for another attack on the city’s police and with bomb threats circulating throughout the metropolitan area, the frontline of a movement for black empowerment and equal justice under the law was Baton Rouge, Louisiana where the actions of police against protesters looked like something out of the 1960s digitally remastered for color television.

​Black Lives Matter protester Deray McKesson was arrested along with hundreds of others including Krystal Muhammad of the New Black Panther Party for simply videotaping acts of police brutality against the protesters.

The actions by the police, who came out in full riot gear to handle the protests, was in no small part shaped by the FBI issuing a warning of an unsubstantiated social media threat of a 'police purge' to 'kill all police' in Baton Rouge and other cities around the country explained Loud & Clear host Brian Becker who felt that the nation’s top cops gave local police license to suppress free speech and crackdown on peaceful assembly.

​"It is a reign of terror in Louisiana," said Becker explaining details of firsthand accounts by protesters who were locked up before they were able to complete their march onto the airline highway in Baton Rouge to shutdown commerce and make their voices heard.

17-year-old protester Chris Hollins who says that police "ambushed" him at the protest.

"I was calling my mom cause they started to arrest people, then saw my sister about to run in the streets," said Hollins. "I stopped her (and) dropped my phone. I picked up my phone and two officers ambushed me."

"Basically they ambushed us and tackled us for now reason," said Hollins in a text message at 12:26am. "They never read me my rights and I’m only 17 years old with no record."

Pictures from the scene show police with automatic rifles and tactical gear threatening the lives of peaceful dissenters if they did not immediately disperse.

Of course, a Trump social media aide with the handle King Robbo reminded us that America in 2016 appears to be approaching a 1960s-style divide in hyperbole and race relations.

"Who else is hoping that @deray gets 'disappeared' by the good old boys at #BatonRouge PD? Come on boys, be HEROES! #BlueLivesMatter," said the staffer in a Tweet before quickly deleting it.

The good old boys is a reference to white racist cops prior to the civil rights movement who would often make people "disappear," or kill them with their bodies appearing under strange circumstances, prior to the age of social media where the whole world is monitoring abuse of government power.

More protests are scheduled in Baton Rouge and throughout the country on Sunday.