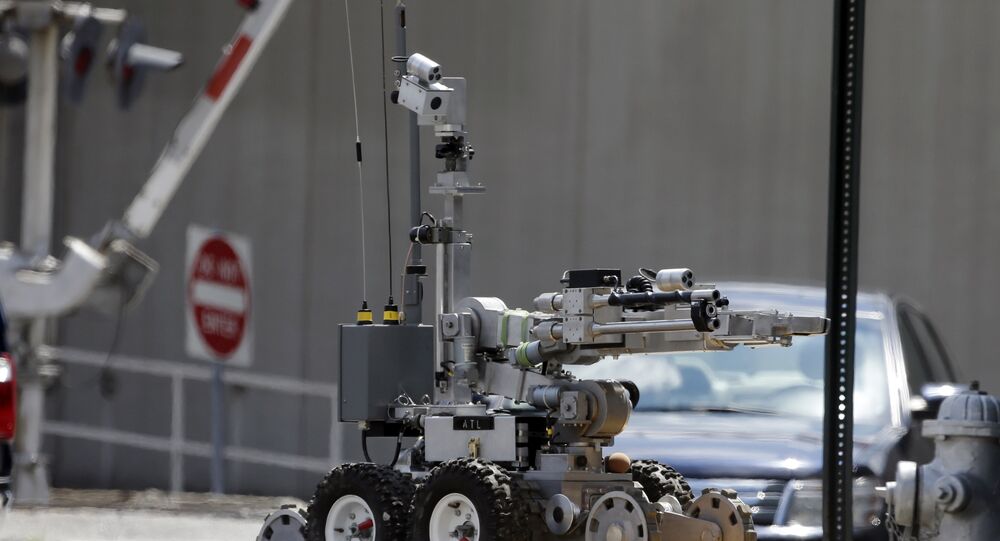 To take down the Dallas sniper on Thursday night, police used an explosive delivered by a robot, a first for US law enforcement agencies.

At least 12 officers were shot, five of them were killed. In addition there were two civilians.

As the chief of the Metropolitan Police Department David Brown said, the negotiations with the sniper lasted for several hours and there was no result. They had to send in a robot with an explosive device attached.

The robot drove directly to the shelter where the sniper was hiding, after which the police detonated the explosive device. The offender was killed on the spot.

As the newspaper Engadget wrote, the type of robot that was used by Texas police officers is difficult to determine. It could belong to a family of multi-functioning robots belonging to TALON robots.

TALON robots are widely used by law enforcement agencies and armies in different countries. Its functionality is dependent on modifications: there are versions designed for reconnaissance and surveillance, there are also some that are used for bomb disposal.

Another widely used robot in the US is the so-called police MARCbot. The journalist and military expert Peter Singer argues that, according to his information, it was this robot that was used to kill the criminals in Dallas.

“Yes, this is 1st use of a robot in this way in policing. Marcbot has been ad hoc used this way by troops in Iraq,” Singer wrote on his Twitter.

Yes, this is 1st use of robot in this way in policing. Marcbot has been ad hoc used this way by troops in Iraq. https://t.co/FfrsgLS2x1

​Although it is clear that the police used the robot because they were under a threat from a sniper, the move has resulted in a debate regarding how this may change the scenario for the future of law enforcement.

“I’m not aware of officers using a remote-controlled device as a delivery mechanism for lethal force,” The Atlantic reported Seth Stoughton, an assistant professor of law at the University of South Carolina, as saying.

© AFP 2020 / Laura Buckman
US Police to Enter ‘Military Mode’ Following Dallas Shooting - Boston Police Ex-Head
“This is sort of a new horizon for police technology. Robots have been around for a while, but using them to deliver lethal force raises some new issues,” he further said.

Nevertheless, he believes that neutralization of the offender was justified.

According to the expert of public group The Sunlight Foundation, Alex Howard, the use of police robots to murder raises a number of legal issues. In particular, the use of robots threatens to lead to murder without trial based on the decision of the police officers themselves.

The expert stressed that the police should not use robots for killing people and US legislative bodies should pay close attention to this.

A separate issue is the increasing militarization of American police, which in conditions of increasing violence in the country is becoming more and more like an army.

“The Dallas PD's actions appear to mark the first time in US history authorities have used a robot or drone armed with a bomb to kill a civilian. This comes at a time when police forces across the nation are being criticized and scrutinized for using military-style tools,” Engadget reported.

The shooting in Dallas, experts wrote, has opened a new era of the application of robots in the United States. How US police officers in the future will apply these high-tech machines remains unclear.