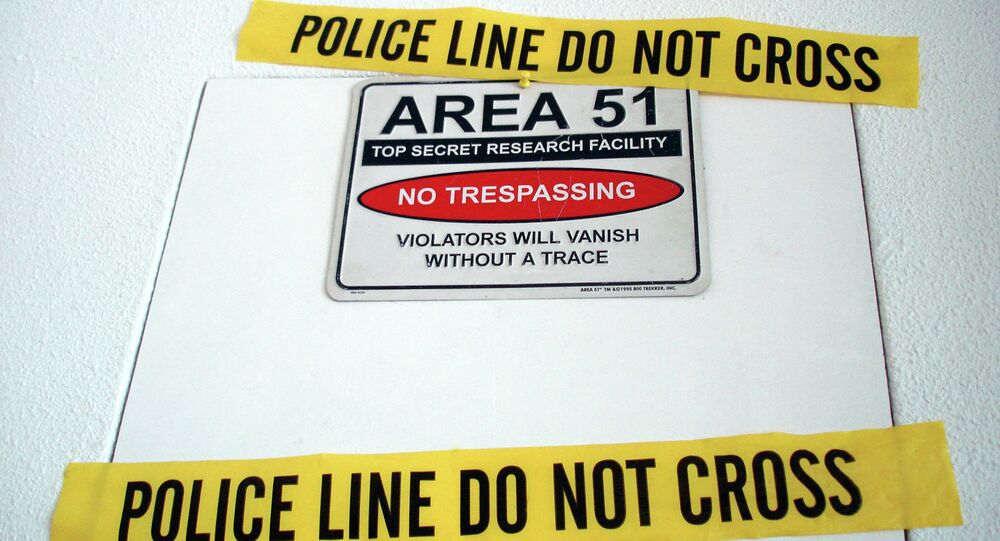 As the promise of declassifying whatever information there might be regarding the visitation of Earth by extraterrestrials is yet to be fulfilled, Area 51 in Nevada, a place that has excited UFO seekers for decades, has increased its security, employing snipers and unmarked helicopters to patrol the region’s perimeter.

© Flickr / AK Rockefeller
Did Google Earth Capture Signs of an Alien Invasion?
Several viral YouTube videos suggest that an entrance into the restricted US Air Force base is being kept safe from prying eyes.

One video, recorded May 18, depicts curious travelers who stray too close to the restricted area. A person claiming to be an author of the footage states during the video that there is a sign at the Area 51 entrance, warning off anyone from wandering onto the base.

The videographers claim to have observed what they describe as a “sniper man” on a rocky hilltop who, they believe, is standing guard.

Another video, recorded on May 15, documents a tour group prowling around the vicinity of the air base’s main entrance. A Black Hawk helicopter appears, flying low enough that a man could “hit it with a rock," one of the witnesses notes. The helicopter circles the tourists closely.

The observer in the video asserts that the helicopter is a “black ops” aircraft, a term commonly used by conspiracy theorists to describe covert operations by a government.

According to Andre Milne, founder of defense technology firm Unicorn Aerospace, the Area 51 operations aren’t about aliens. In an interview with Express.co.uk, Milne states that the US military tests classified aircraft at the remote facility.

"Area 51 is a highly-secured facility for the painfully obvious necessity to restrict any and or all witness observations of the classified aircraft," he said.

Area 51 became notorious in 1947, when representatives of the US military claimed that they had discovered a crashed alien spacecraft outside the town of Roswell, Nevada. Subsequent statements claimed  that the ‘UFO’ was a crashed weather balloon, but many insisted that the remains of a spaceship had been moved to Area 51 for examination.

Earlier this year, Democratic presidential candidate Hillary Clinton promised to declassify all data about encounters with extraterrestrials, if she’s elected as President of the United States in November.