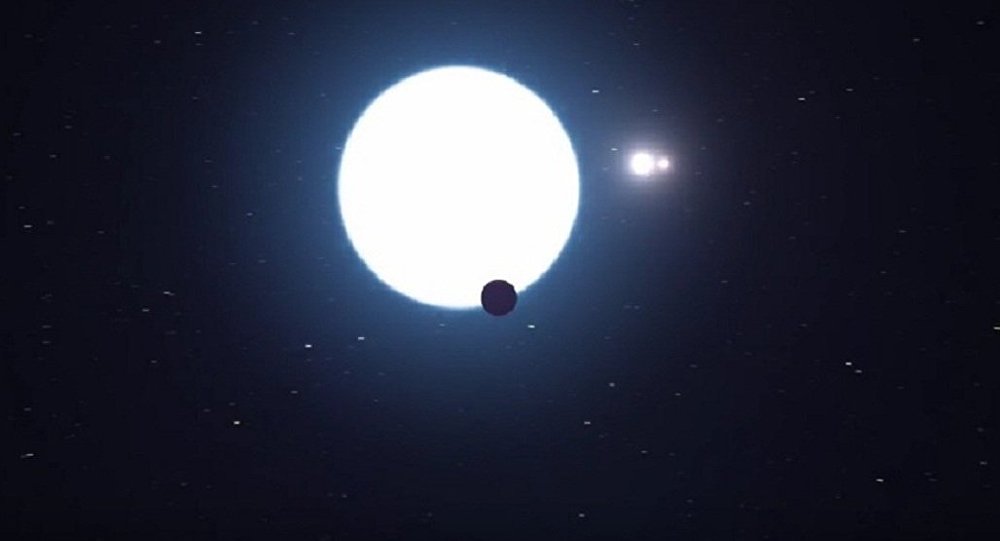 A newly found exoplanet has beat Luke Skywalker’s home planet – it has not two, but three suns and seasons lasting longer than most humans will ever live.

© Photo : Facebook/ NASA｜ＨＤ｜-Tommy Lun Fibar
NASA Sensor Technology in Fabric to Revolutionize Textile Industry
The unusual exoplanet, known as HD 131399Ab, is located in the large southern constellation Centaurus about 340 light-years away from Earth. It is believed to be about 16 million years old, making it one of the youngest exoplanets discovered to date. With a temperature of 850 Kelvin (about 1,070 degrees Fahrenheit or 580 degrees Celsius) and weighing four Jupiter masses, HD 131399Ab is also one of the coldest and least massive directly imaged exoplanets.

© AP Photo / Arun Sankar K
India May Buy Russian Microcircuits for Its Space Program
"HD 131399Ab is one of the few exoplanets that have been directly imaged, and it's the first one in such an interesting dynamical configuration," said Daniel Apai, an assistant professor of Astronomy and Planetary Sciences who leads a research group dedicated to finding and observing exoplanets at the University of Arizona.

"For about half of the planet's orbit, which lasts 550 Earth-years, three stars are visible in the sky, the fainter two always much closer together, and changing in apparent separation from the brightest star throughout the year," said Kevin Wagner, a first-year PhD student in Apai's research group and the paper's first author, who discovered the bizarre exoplanet.

UA astronomers have discovered a planet in a system of not two, but three stars. https://t.co/7yXbYHl21g pic.twitter.com/8epXr3APFi

​"For much of the planet's year the stars appear close together, giving it a familiar night-side and day-side with a unique triple-sunset and sunrise each day. As the planet orbits and the stars grow further apart each day, they reach a point where the setting of one coincides with the rising of the other — at which point the planet is in near-constant daytime for about one-quarter of its orbit, or roughly 140 Earth-years," Wagner added.

© Sputnik / Ilia Pitalev
Classic Soviet Cartoon Character Cheburashka Becomes Cosmonaut
In addition, HD 131399Ab is the first discovery made with the Spectro-Polarimetric High-Contrast Exoplanet Research Instrument (SPHERE), one of the world's most advanced instruments dedicated to finding planets around other stars. It is installed on the Very Large Telescope operated by the European Southern Observatory in Chile.

Planets in multi-star systems are of special interest to astronomers and planetary scientists because they provide an example of how planet formation functions in these extreme scenarios.