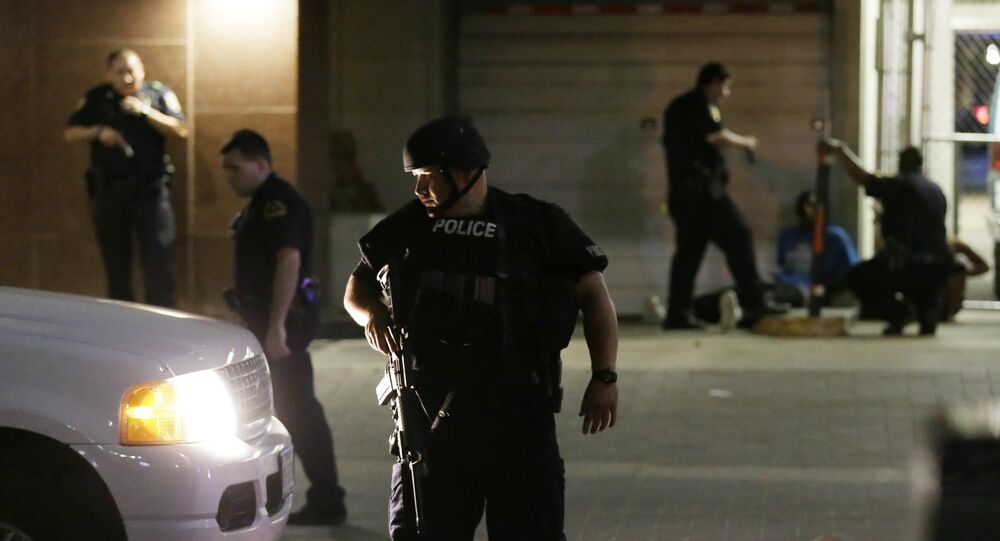 A horrific wave of violence erupted during a peaceful protest in Dallas, which in its aftermath has left 5 officers dead and eleven others injured in America's worst police assault in recent memory. Additionally, one civilian was hit by a stray bullet.

UPDATE: The fourth suspected shooter has been 'neutralized,' according to local media sources, with some claiming he shot himself, others saying he was taken down.

​Earlier, Dallas police chief confirmed that one of the suspected snipers is hiding in the El Centro College garage. The police were engaged in negotiations with him, however the suspect was not cooperating. The chief also stated that the suspect claimed that bombs had been placed all over the garage and downtown.

There may still be students and teachers in El Centro College at this time.

​The police say that there are at least four suspects, all of whom had rifles and were shooters from different points shooting in triangle arrangement to expand the kill box. The attackers were said to all be coordinated, they purportedly knew the parade route and strategy.

Protests against the killing of two unarmed black men by police forces in Minnesota and Louisiana turned tragic on Thursday night when several snipers shot 15 police officers — 4 DART (Dallas Area Regional Transit) police and 11 Dallas police officers — from an elevated position. At least five officers have been killed and several remain seriously injured per reports by the Dallas Police Association.

It has been a devastating night. We are sad to report a fifth officer has died.

​Dallas police initially reported that they have one suspect cornered while the second sniper remained unaccounted for.

​​Throughout the country there have been other outbreaks of unrest or violence during nationwide protests but nothing on the scale of the tragedy that now grips the city of Dallas, Texas.

The situation that has struck the city of Dallas was once completely out of control with police stuck in panic mode at this point. Initial reports indicate that police have arrested one individual wearing body armor who was brandishing a weapon, but it appears this individual is not connected to the two snipers who have rained terror upon the city.

American TV channels are broadcasting live reports of unrest from different cities of the country.

​In Washington, according to participants, about a thousand people gathered to protest. According to the reports, the protesters broke through the fence around the building of the US Congress.

​Fox News Channel shows unrest and reports shooting in Dallas (Texas). According to the information from DART, four policeman is dead, others got injuries.

One of the shooters was "neutralized" and the second was on the 7th floor of parking garage in the Bank of America building with AR-15 and body armor, some of the earlier reports said.

This is a little bit cleaner clip. Shots fired at the #blacklivesmatter protest. pic.twitter.com/DAJVkCll32

​At the same time Fox News shows a protest in New York City, relatively calm before.

marched in the #StopPoliceTerror #BlackLivesMatter protest in New York. pic.twitter.com/8C6fIsit7w

© Flickr / James
Black Man Shot to Death by Police During Traffic Stop in Minnesota (VIDEO 18+)
The protest in Dallas came after two African-American men were shot and killed by police in separate incidents that were widely shared on social media.

Police in the St. Paul, Minnesota suburb of Falcon Heights shot and killed Philando Castile late Wednesday night after pulling over his car for a broken tail light.