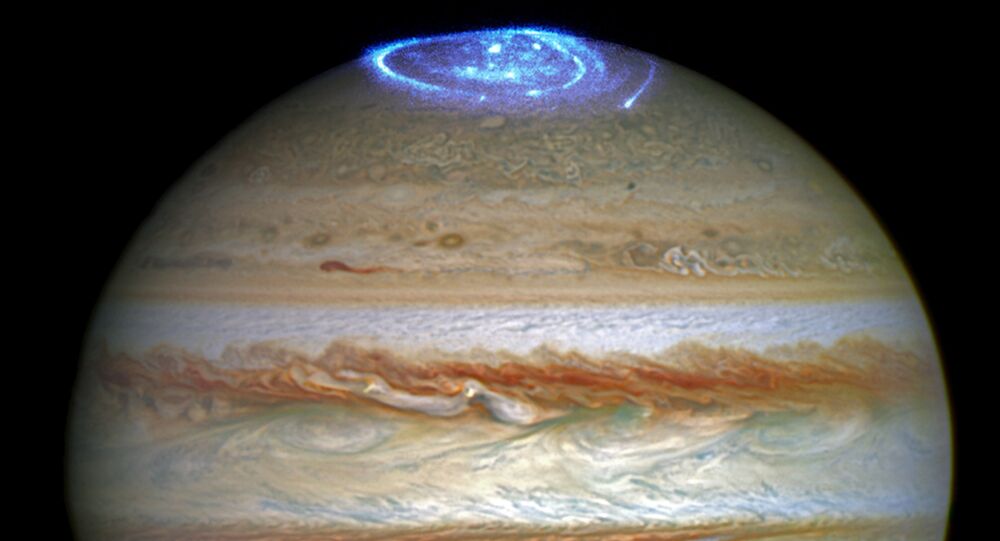 With the help of NASA's Hubble Space Telescope, astronomers captured auroras, vivid glows in the atmosphere, at the poles of the solar system’s largest planet.

© Photo : Youtube/Team Indus
Indian Tech Project Launches Int’l Competition for Young Space Enthusiasts
The auroras are created when high-energy particles enter a planet's atmosphere near its magnetic poles and collide with atoms of gas. The phenomenon has been noticed on the poles of Jupiter before; however, this time the scientist captured the brightest and the most active lights ever observed. According to NASA's report, the auroras on Jupiter are huge and hundreds of times more energetic than those on Earth.

#Hubble studies auroras on the poles of the largest planet in the solar system, Jupiter. https://t.co/zyPrVJdIBX pic.twitter.com/SsufGWHhkQ

NASA
NASA Finds ‘Completely Unexpected’ Mineral on Mars
​The monitoring is supported by NASA's Juno spacecraft, which is currently on its way to Jupiter. While Hubble, with its ultraviolet capabilities, is observing and measuring the auroras on Jupiter, Juno is measuring the properties of the solar wind, a stream of charged particles ejected from the Sun. As well as producing beautiful images, the observation program aims to determine how various components of Jupiter's auroras respond to different conditions in the solar wind.

"These auroras are very dramatic and among the most active I have ever seen," said principal investigator of the study Jonathan Nichols from the University of Leicester in the UK. "It almost seems as if Jupiter is throwing a firework party for the imminent arrival of Juno."

Hubble is conducting the constant observation to capture all the smallest changes in Jupiter's atmosphere. Using the images, the researchers make videos demonstrating the movement of the vivid glows, which cover areas bigger than Earth.

The new study will help to better understand how the sun and other sources influence auroras.