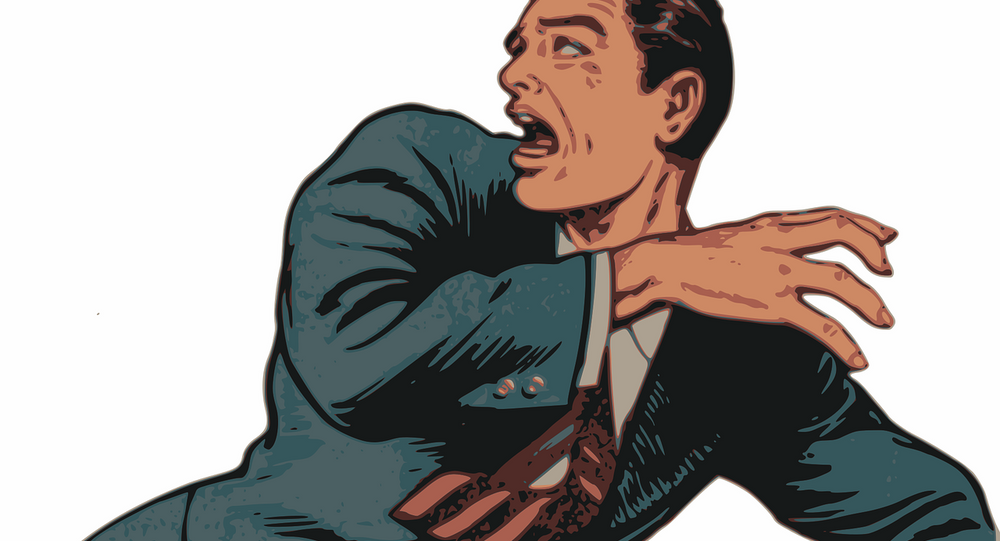 Stay Paranoid, 'They' ARE Out to Get You, US Intel Office Tells Tourists

Well, that's exactly what the US National Counterintelligence and Security Center (NCSC) has warned US citizens about in their latest video on how to keep safe from "foreign government" intrusions and personal data thieves alike.

Cue music — well, muzak, scene one, it's a "foreign airport" where the blue shirt and chino wearing gormless business traveler has had his passport checked.

Now it's a hotel lobby and the gormless US traveler who we now know is called Frank, has checked into room 612 while the mischievous receptionist text messages her mate (who's wearing a leather jacket) his hotel room number.

'I'm That Part of You That Knows Better'

Muzak changes, drops a tinny beat, and in walks the man with the leather jacket who promptly opens the safe, downloads all of Frank's data and escapes. Obviously — because Frank is abroad isn't he.

© Photo : Youtube/Office of the Director of National Intelligence
NCSC New Travel Advice To US Holiday Makers: Perpetrator in a leather jacket

Then in some kind of antiseptic version of "Drop Dead Fred, "Frank's nemesis appears. An imaginary "friend" (or patronizing d***) is on screen to tell Frank: "I'm that part of you that knows better."

So, the NCSC is basically telling all US citizens that they know best — and that people who dare to leave the country on business — or vacation — are at risk of fraud, theft or deception at the hands of everyone, starting with the passport controller, hotel receptionist and her mate wearing the leather jacket, or — surprise, surprise — a foreign government fishing for information.

Frank is then scolded by his patronizing imaginary friend for packing too many electronic devices, telling his family on social media that he's off on business and for talking to stranger in a taxi.

But Frank says his family might want to know what he's up to.

In true Scooby Doo style, Frank, who is more like Shaggy at this point, gormlessly points out that maybe he should change his privacy settings. I guess that way,  those pesky kids wearing leather jackets and working for a foreign government wouldn't be able to have got their hands on his data.

The next chilling installment is when Fred — let's call him Fred now — creeps up from behind the mirror and talks to the camera, with a forehead that says "my Dad is better than your Dad" and tells Frank — and the rest of the measly 21,000 YouTube viewers that:

© Photo : Youtube/Office of the Director of National Intelligence
"Assume when you're traveling you have no privacy. All your communications might be watched. Never expect to have any privacy when you travel and never leave your electronic device unattended."

The movie ends with the powerful message:

And it's not the first time the NCSC has produced a paranoia inducing thriller telling US citizens to keep their gums healthy — sorry — raise their shield. This latest video is the fourth in a nail-biting five part series of Know the Risk — Raise Your Shield videos, covering Spear Phishing, Social Media Deception and Human Targeting.

Frank definitely can't wait for the next one.

"Anyone — not just a government official — is at risk while traveling overseas," according to Bill Evanina, director of NSCS.

"Everyone needs to take common sense measures before traveling, and while abroad, to protect themselves, and their personally identifiable and proprietary information."