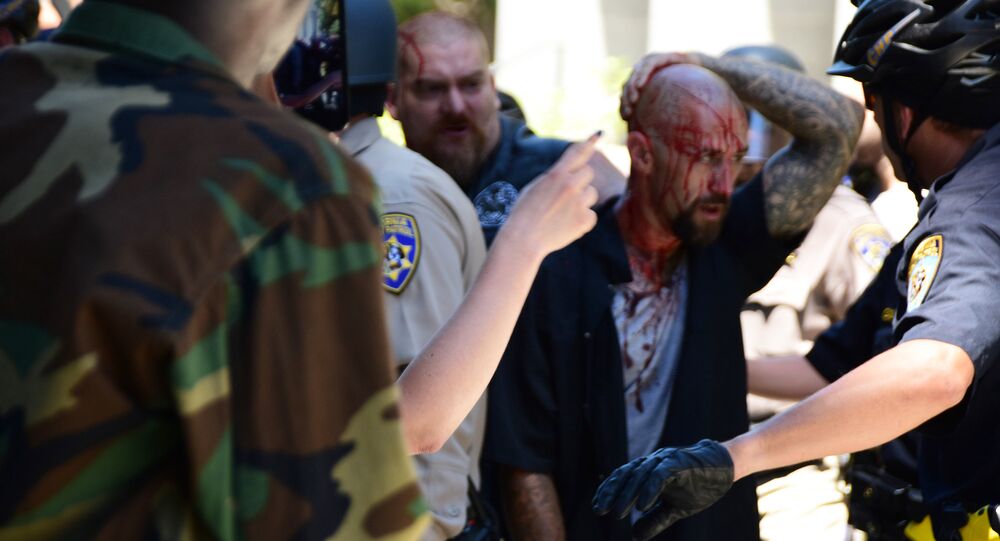 In a sign of escalating racial tensions and hateful rhetoric, violence erupted at a white nationalist rally on Sunday in Sacramento, California, leaving ten injured, many from stabbings.

Man With 'Swastika Helmet' Attacks Refugees Amid Fears of Neo-Nazi Violence
The rally was organized by the Traditionalist Worker Party group, which believes that “European-American identity is under constant attack by members of American institutions such as the state, education, culture and even churches.”

While the group’s website claims its members “reject racial supremacism, and believe all the world's peoples should embrace and celebrate their sacred heritage and identities,” it also calls for “racial separatism” to “safeguard…white heritage.” It is widely considered a white power group.

After word got out about their plans to hold a rally at the state capitol, a group calling itself “Antifa Sacramento” released a statement seeking people to attend and help shut the event down.

The statement also noted that Matthew Heimbach, founder of the TWP, was recently caught on camera assaulting a black female protester at a Donald Trump rally earlier this year.

“Antifa Sacramento believes in non-sectarian defense of other anti-fascists and a multi-faceted approach to fighting racism. This means that individual people have their own methods of combating hate and we do not criticize others tactics. Our objective is never violence. We believe that hate should not have a platform in our community and we are determined to shut them down. Ignoring them DOES NOT make them go away and will only perpetuate the problem we already have,” Antifa Sacramento wrote in their post.

Shortly before noon, when the authorized rally was set to begin, both groups began to arrive at the Capitol grounds. Protesters outnumbered the TWP and denounced the white supremacist group as “Nazi scum.” The violence began immediately.

People began fighting using sticks, fists, and within minutes, it escalated to knives. Members of the press reported being chased off by the protesters for filming the faces of the Antifa protesters, and many who were in attendance described it as a “war zone.”

"They attacked each other without hesitation," protester Chandra Zafra, 50, a member of the Mexica Movement nonprofit, told the Los Angeles Times.

At least seven people were stabbed, nine hospitalized, and many more suffered minor injuries. The police department confirmed that injuries were sustained on both sides of the fight, but did not elaborate on which side carried out the stabbings.

One Antifa protester, a black male who appeared to be in his 20s, was captured on camera with stab wounds in his chest and abdomen.

Brian Levin, the director of the Center for the Study of Hate and Extremism at Cal State San Bernardino, told the LA Times that he believes the violence may help the TWP recruit new members, as they can claim they are “under siege” by violent leftists.

“Make no mistake – I think the hatemongers wanted to have this violence take place,” Levin said. “And some of the anti-fascists very much wanted to have a violent confrontation.”