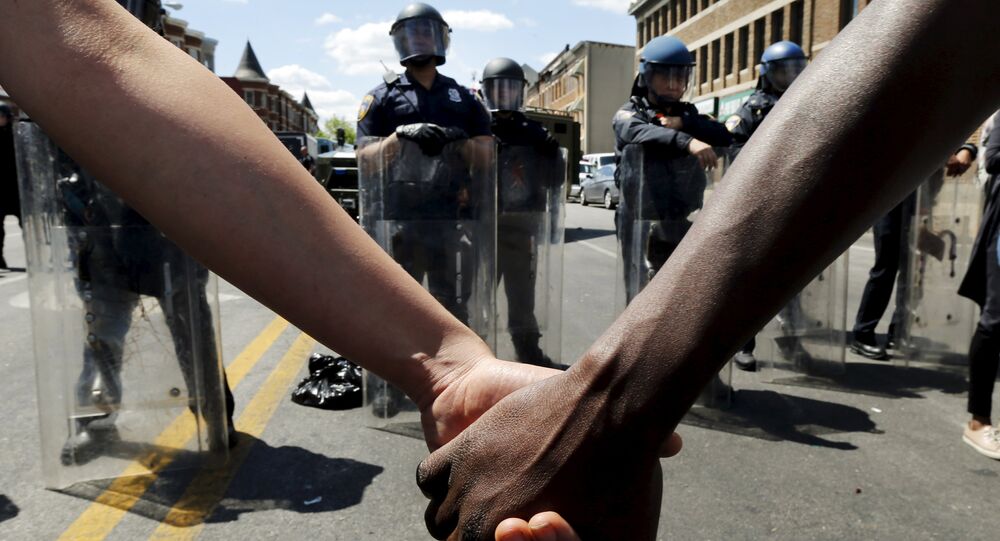 The Baltimore police union is facing massive backlash after posting a series of celebratory tweets following last week’s acquittal of an officer charged in the death of Freddie Gray.

Last Thursday, Officer Caesar Goodson, 46, the driver of the van ride that caused the death of 25-year-old Gray, was acquitted of all charges, including the most serious of all six officers — 2nd degree depraved-heart murder.

The evening after the judge made the ruling, the Baltimore Fraternal Order of Police tweeted a meme of Leonardo DiCaprio doing a toast from the Great Gatsby, with the caption, "Here's to the Baltimore 6 defense team, the FOP and Detective Taylor.”From the @FOP3, Baltimore's Police Union.

The following day, they posted another inflammatory message. The tweet included a photo of Baltimore's State's Attorney Marilyn Mosby on an NYPD union magazine cover from last year, captioned with "The Wolf That Lurks."

Twitter users reacted to the insensitive tweets immediately. In response, many of the offending tweets were deleted. Baltimore Police Commissioner Kevin Davis then quickly took to the platform with a statement condemning the remarks.

"Inappropriate, insensitive remarks or attacks that serve to detract from our necessary relationships with our community and criminal justice partners have no place in our City," Davis wrote.

The killing was the result of incidents beginning April 12, 2015, when Baltimore police officers made eye contact with Gray and chased him when he ran away. Once Gray was apprehended, witnesses gave accounts of officers "folding" his body in painful-looking positions, with one officer putting his knee in Gray’s back, severely damaging his spine.

Gray had a knife on his person at the time of the incident, but the legality of the weapon has been a subject of fierce debate, with many arguing that possession of the weapon did not violate any laws.

© REUTERS / Sait Serkan Gurbuz
235 Arrested in Baltimore Rioting After Freddie Gray's Funeral
Gray’s spinal cord was severed after being placed in the back of a police van for transport, while handcuffed, shackled, and not properly secured. Many believe that he was taken on a deliberately “rough ride” and slammed around the back of the vehicle without having his hands free to protect himself. He died in the hospital a week later.

Goodson was the third officer to stand trial in the death which sparked riots across the city last year.

All three trials have resulted in the officers walking free.

Four other Baltimore police officers are charged in connection with Gray’s death.

A fifth officer, Edward Nero, was acquitted on all charges by Judge Williams in May. Like Nero, Goodson had waived his right to a jury trial.